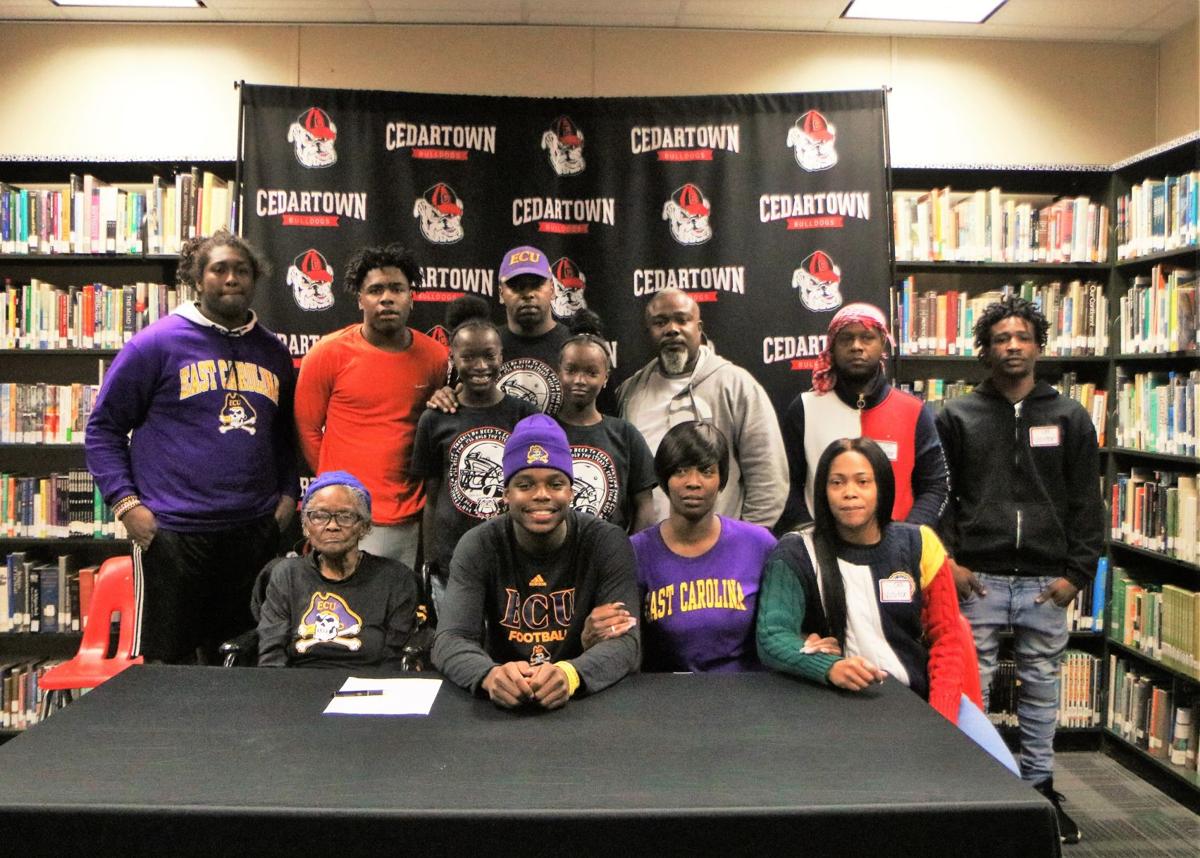 Taji Hudson was joined his family and friends at Cedartown High for his official signing with East Carolina on Dec. 18. 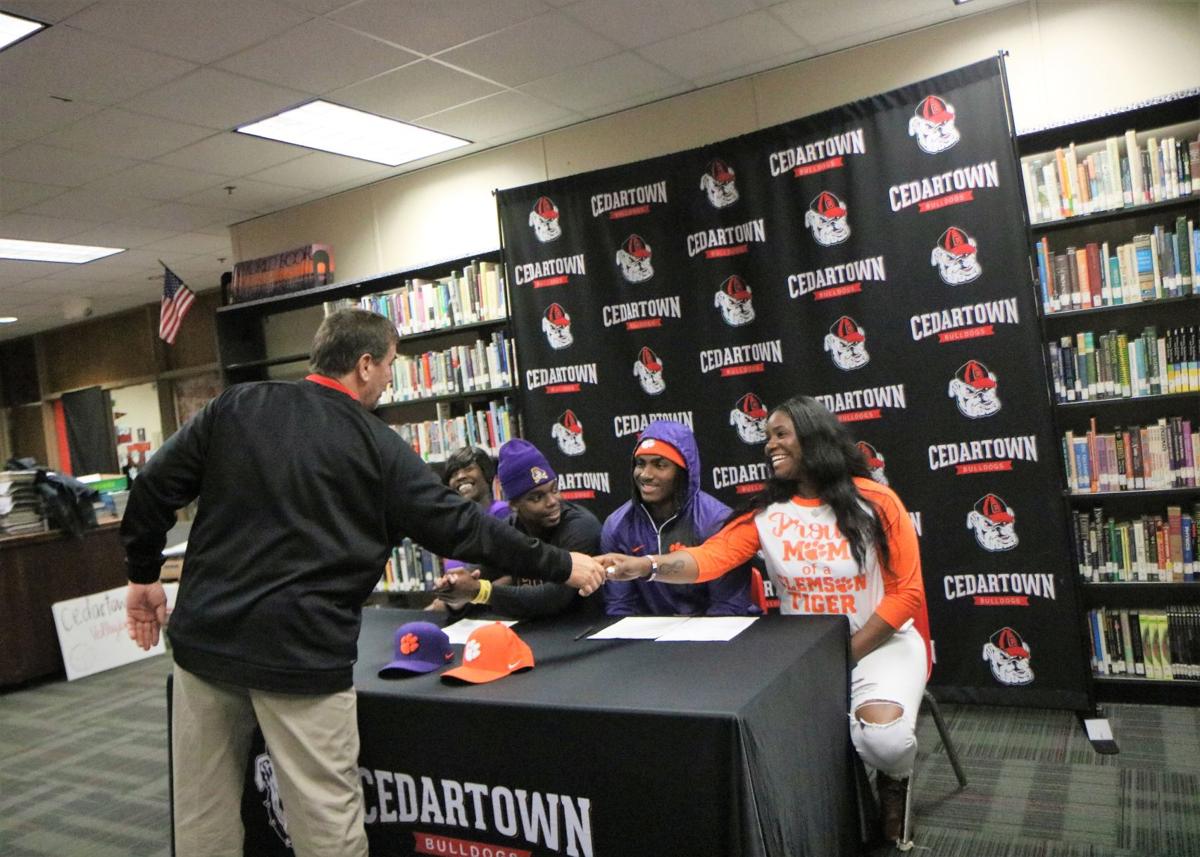 Coach Doyle Kelley shook hands with parents and players ahead of their official signings for Taji Hudson and Kobe Pryor, who are heading respectively to East Carolina and Clemson

Taji Hudson was joined his family and friends at Cedartown High for his official signing with East Carolina on Dec. 18.

Coach Doyle Kelley shook hands with parents and players ahead of their official signings for Taji Hudson and Kobe Pryor, who are heading respectively to East Carolina and Clemson

After a rollercoaster of a Senior year, Taji Hudson signed with East Carolina on Wednesday.

This signing is a culmination of hard work, perseverance, and loyalty.

In the beginning, Hudson showed his loyalty to ECU by committing to the Pirates on July 22. In the end, East Carolina showed their loyalty by honoring their commitment to Hudson months later.

Hudson’s commitment to ECU in the late Summer came as a surprise to no one; the Pirates were steadily a favorite in his recruitment.

“I fell in love with ECU when I went up there. It really is a great place,” said Hudson. “The coaching staff were just perfect, too. They were so supportive and always showed that they believed in me.”

The Cedartown gunslinger committed to the Pirates over seven other Division-I offers from schools such as Air Force, Army, Coastal Carolina, Virginia, and Virginia Tech.

After shutting down his recruitment, Hudson said that he was turning his full attention toward his Senior football season.

The 2019 campaign would not go as planned for the star quarterback.

In the third quarter of his first regular season game, Hudson went down with an injury after calling his own number on a read option play versus Rockmart. He laid on the grass at Doc Ayers Field for minutes until he was helped to an ambulance that took him to Floyd Hospital.

At Floyd, it was determined that his midsection injury was much more serious than initially suspected. Hudson was transported to Erlanger Hospital in Chattanooga, Tenn., where it was revealed that he had suffered a 4.5 inch laceration on his kidney and a 1.5 inch cut on his spleen.

Hudson, surrounded by his friends and family, spent over a week at Erlanger. After being cleared from the hospital, it was clear his Senior season was over. There would be no record-setting Senior season, no Hudson kneel-downs capping off big victories, and no touchdowns by Hudson on Senior Night.

However, he still had the opportunity to play at the next level.

As former Cedartown Head Football Coach Doyle Kelley said, there was never any doubt that he was “the guy” for East Carolina.

“I was able to speak with Taji’s main recruiter from ECU, Coach De’Rail Sims, and I asked him, ‘Coach, what are y’all going to do?’ Immediately he told me that they were honoring his commitment and his scholarship to East Carolina,” Kelley said. “He said that they were sold on his potential, both as a football player and as a man, and that they thought the world of Taji.”

“A school in that situation, I think they would have every right to sit back and reconsider things. East Carolina saw what kind of young man he is, what kind of character he has, and they stuck by that commitment,” Kelley added.

In talking to the man himself, Hudson said that ECU’s handling of the ordeal couldn’t have been better.

“They stayed in contact with me throughout the healing process and assured me that I was their guy. It really meant a lot to me and my family,” said Hudson. “It wasn’t an easy situation, but knowing that they were standing with me meant everything. I am very thankful for them.”

As Hudson inked the dotted line on Early National Signing Day, he wanted everyone to know that this accomplishment could not have been possible without his support system that were in attendance.

“I am very proud to be able to share this moment with my family, friends, and coaches who are here today,” said Hudson. “They deserve this just as much as me. They’ve helped me put the time in, kept pushing me, and helped keep me determined.”

If the product he put on the field was any indicator of his support system, they evidently did a great job in motivating the quarterback. Hudson only spent one full season as starting quarterback for the Cedartown Bulldogs. He improved every single week and quickly became one of the best signal callers in northwest Georgia.

Hudson finishes ranked as a three-star athlete by 247Sports. He is considered the no. 36 dual-threat quarterback in the nation and is ranked the no. 166 player in the state of Georgia for the Class of 2020.

Addressing the elephant in the room, Hudson is reportedly healing ahead of schedule.

He is expected to be fully cleared by the time he starts Fall Camp at ECU. Hudson started back working out in the weight room in recent days, less than four months after his freak injury.

On the academic side of things, Hudson said that he plans on being an athletic trainer.

“Athletic training, that’s my end goal,” said Hudson. “That can vary a little bit, maybe to something that connects with that, but my goal is to become an athletic trainer.”