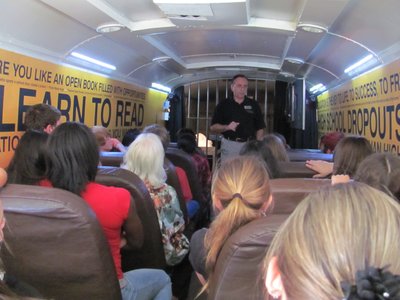 Groups of students were brought in for a presentation on the value of education and the consequences of bad choices. 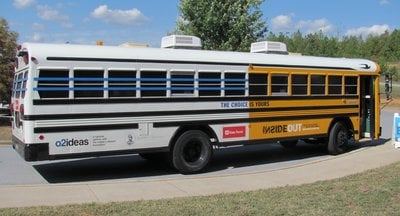 The School Choice Bus was parked outside of Cedartown Middle School on Tuesday.

Groups of students were brought in for a presentation on the value of education and the consequences of bad choices.

The School Choice Bus was parked outside of Cedartown Middle School on Tuesday.

The Polk County Board of Education voted unanimously to go forward with efforts to turn over an older school bus now out of the fleet and give it a new lease on life and help teach children about the dangers of drugs.

The board voted unanimously at the recommendation of Superintendent Laurie Atkins to give up one of the few remaining surplus buses that haven’t been sold to Polk Against Drugs, which seeks to bring to an end the sale and use of drugs in the community.

“This is really a positive thing for our county,” Atkins said. “We’ve had the opportunity to purchase some new buses and take older ones off the road.”

She said that several buses were sold at auction and others were picked up by those who placed bids for purchase once they were placed in surplus by the board in past months, but the one or two remaining in the surplus fleet was sought out at the request of Polk Against Drugs.

Atkins added that they wanted to know what might be a good way to help educate youth about the dangers of drugs, and the suggestion was made to follow the model provided by The Choice Bus.

“I talked to them about how it would have been nice to have The Choice bus come to our middle schools,” Atkins said.

In short, older buses are converted on the inside to host students in seats like a classroom environment, but provide a real look at what happens when youth experiment and become addicted to drugs.

The Choice Bus even includes a mock jail cell to drive the point home.

It has been in Polk County before — way back in 2011 — and Atkins said because a bus was available and that Polk Against Drugs was amenable to helping with the conversion to have it on hand locally, the donation made sense.

“We won’t have to rely on the availability of another bus,” Atkins said. “We can allow our community to use it, our schools can use this bus.”

Karen Nissen, a member of the Polk Against Drugs committee on drug prevention and education, explained that the bus will get a transformation to provide a setting for youth to tour and see for themselves the negative paths in life drugs will take people who use and abuse narcotics.

They have plans in the near future to tour The Choice Bus, created by the Mattie C. Stewart Foundation, and have a foundation on which to build their own exhibits within to provide drug education. The foundation is a national non-profit that started in 2007 to help educators and community leaders provide drug education offerings, along with efforts to help reduce the dropout rate and increase graduates.

Court to rule in case accusing Myanmar of Rohingya genocide

Democrats not alone in soliciting votes in Iowa; GOP is, too