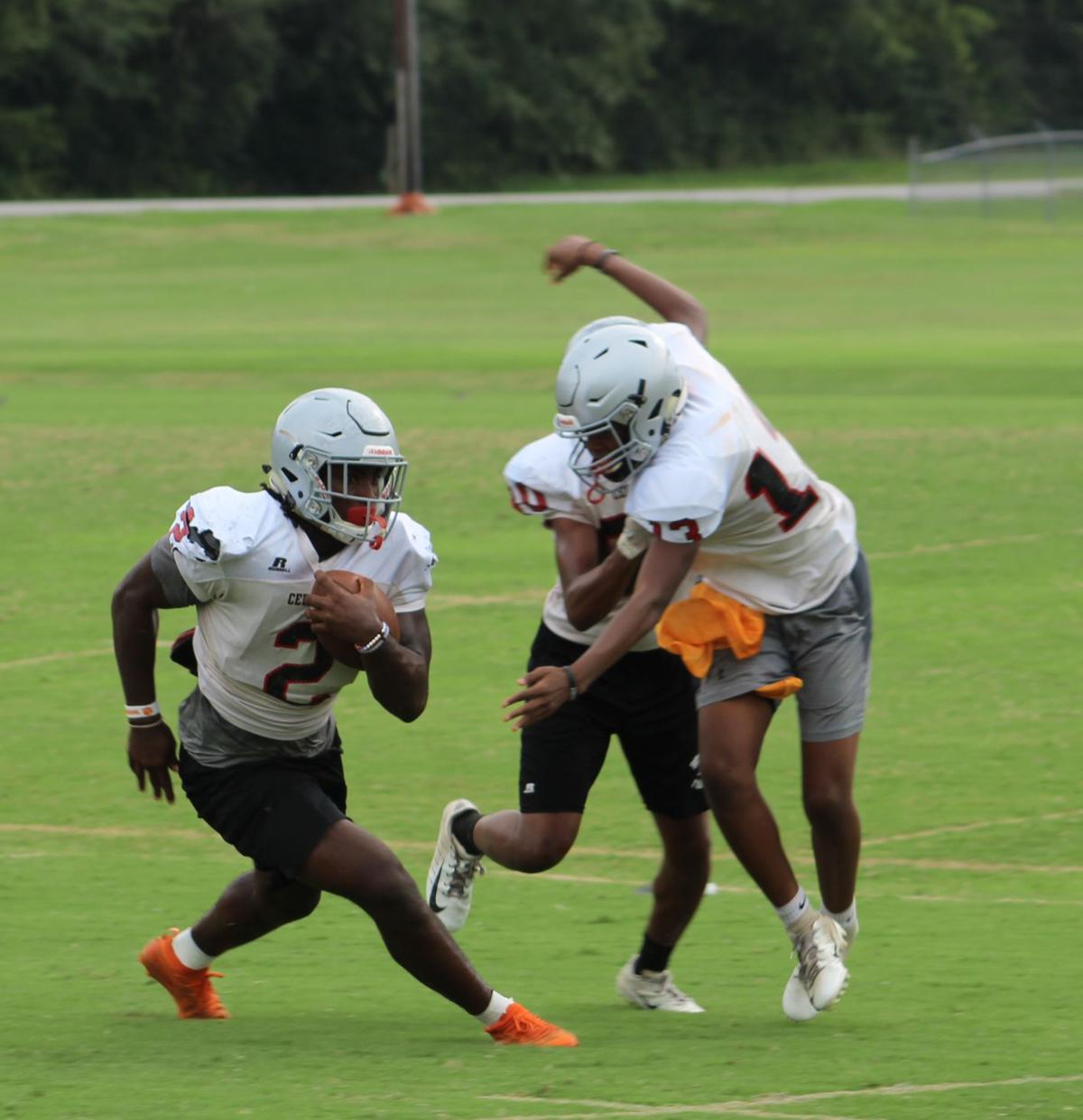 Kobe Pryor couldn't be caught during practice on Wednesday, August 7. 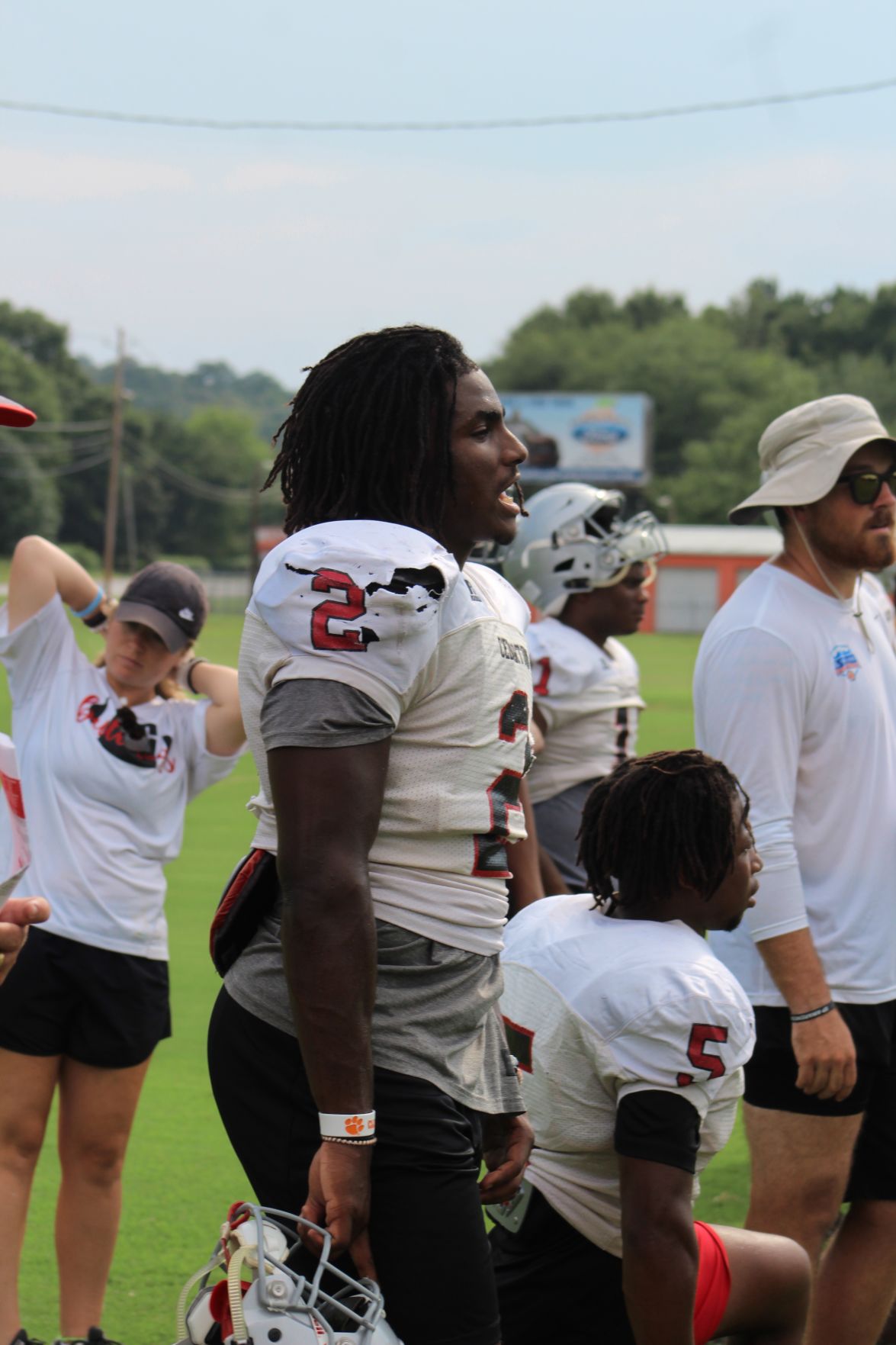 Kobe Pryor gets a brief break during practice before he gets back into the backfield and into plays. 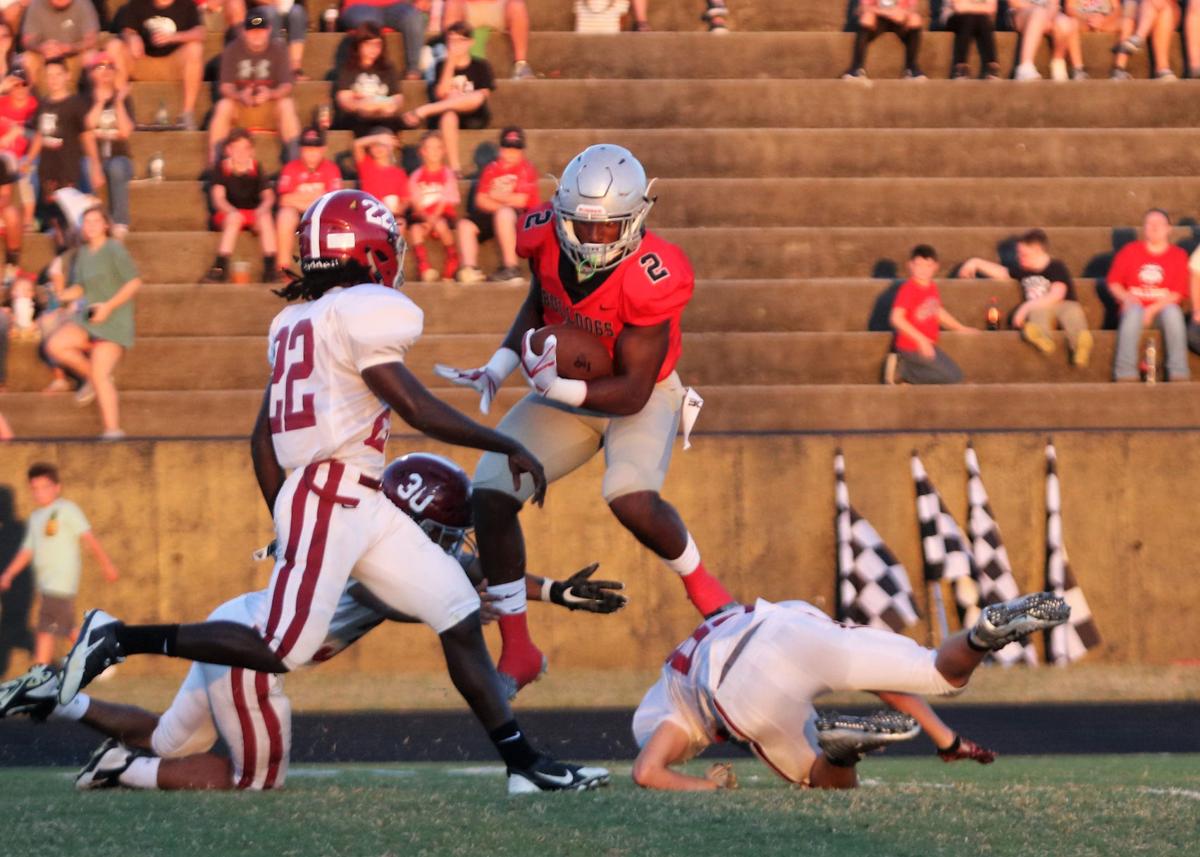 Kobe Pryor made running room and the Southeast Whitfield defense miss tackles when he couldn’t find open field to bolt downfield during the Bulldogs’ 2018 win over the Raiders. 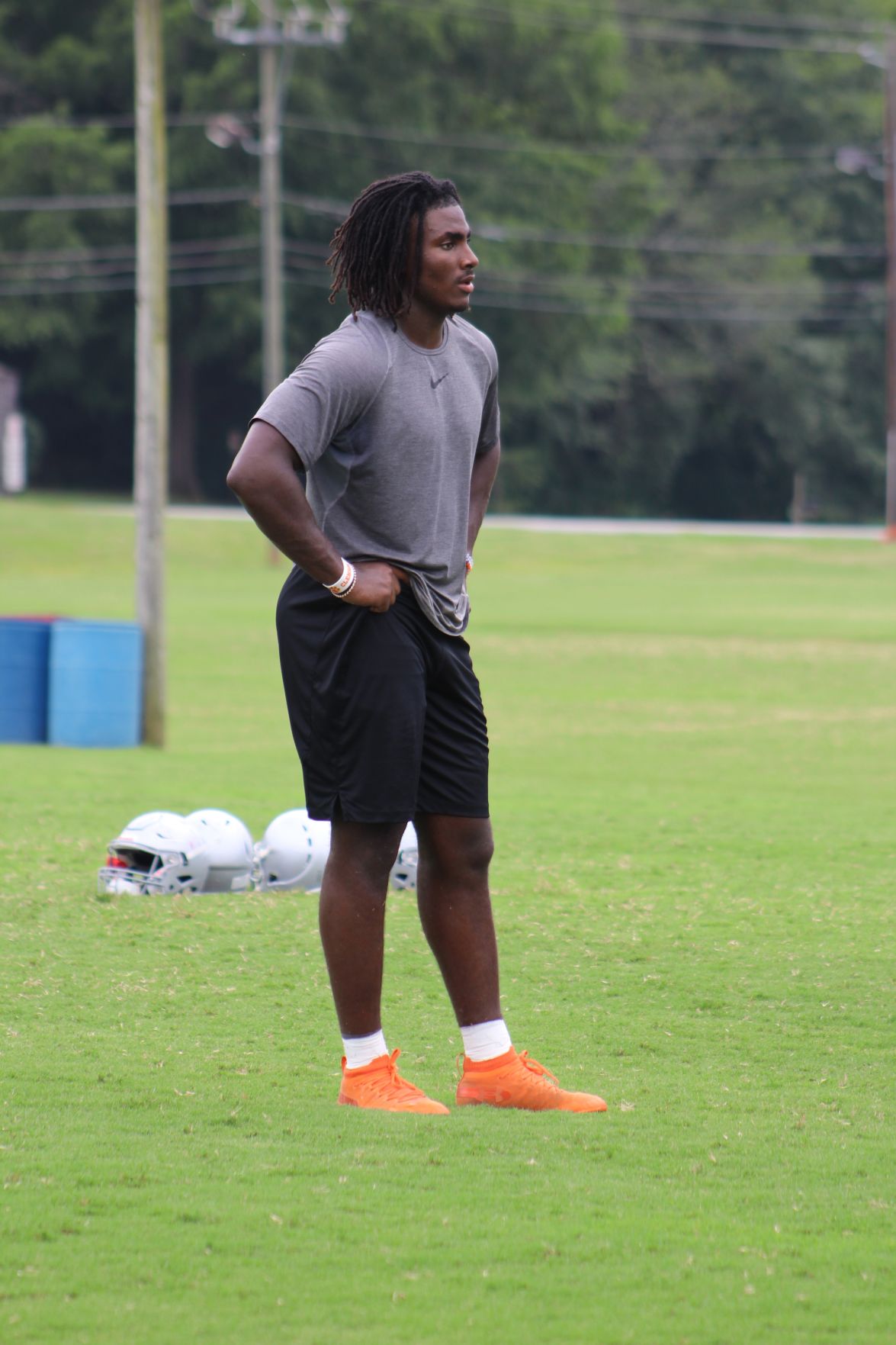 Even when practice finishes, Kobe Pryor keeps up the workout with other players as they get ready for the 2019 season to start. 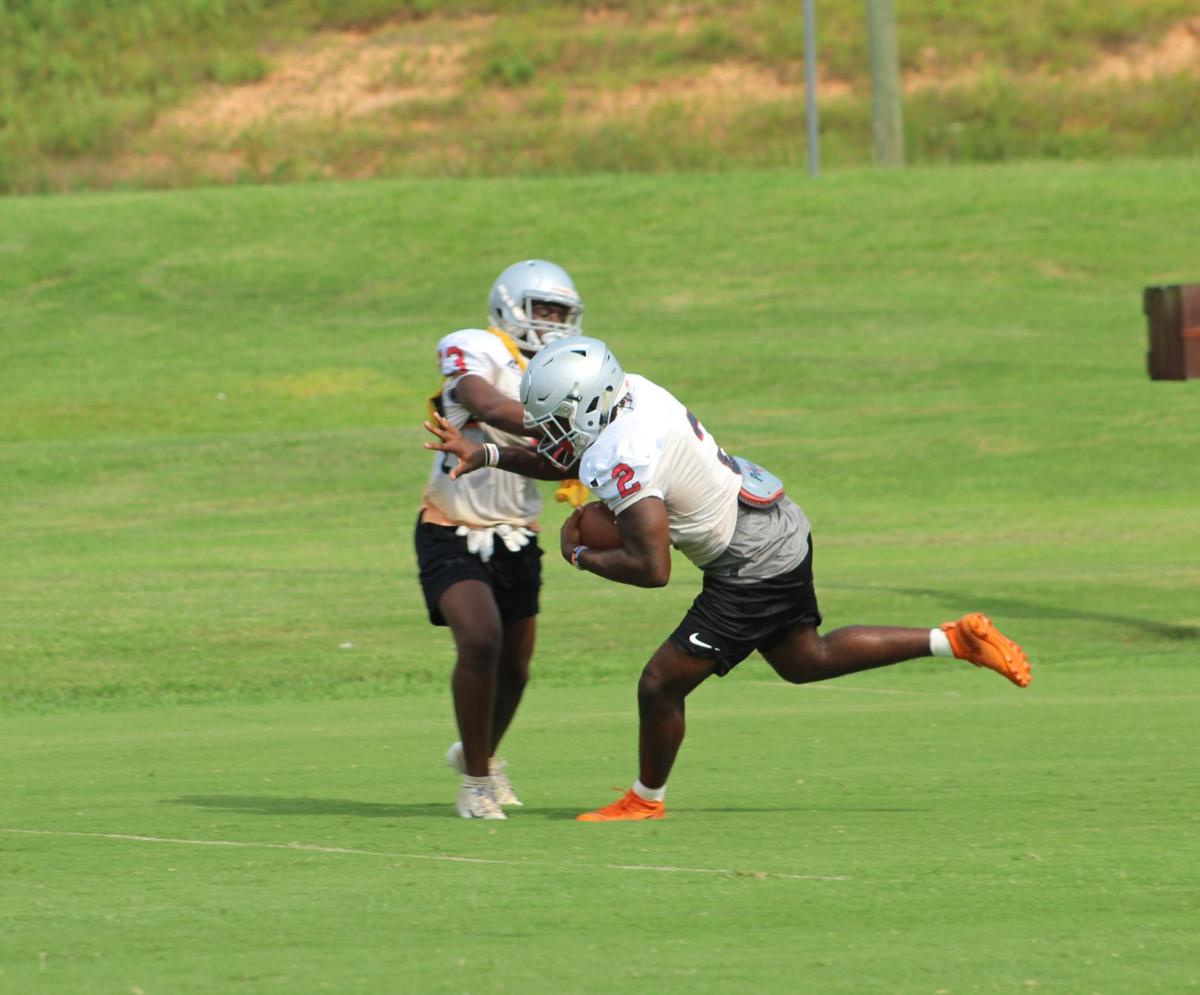 Kobe Pryor cuts around his own defense during practice on Wednesday, August 7.

Kobe Pryor couldn't be caught during practice on Wednesday, August 7.

Kobe Pryor gets a brief break during practice before he gets back into the backfield and into plays.

Kobe Pryor made running room and the Southeast Whitfield defense miss tackles when he couldn’t find open field to bolt downfield during the Bulldogs’ 2018 win over the Raiders.

Even when practice finishes, Kobe Pryor keeps up the workout with other players as they get ready for the 2019 season to start.

Kobe Pryor cuts around his own defense during practice on Wednesday, August 7.

Every player on the sidelines of the Cedartown Bulldogs is valuable to the whole of the team, but from year to year certain players get opportunities to stand out over others as their talent grows through their careers on the gridiron.

The Bulldog who is set to take that talent to the next level with a National Champion caliber team is Kobe Pryor.

The three-star back is currently committed to Clemson and is ranked the 27th best running back in the entire nation for the Class of 2020. Pryor was sought after by a number of schools, including Auburn, Georgia Tech, and South Carolina, but in the end chose the defending national champion Tigers.

However, these scholarships were not given — they were earned.

As head coach Doyle Kelley said best, the daily grind that Pryor has put into succeeding as a Bulldog started from he came into the high school program.

“Since his freshman year Kobe has been putting in the work to be a stud,” Kelley said. “He will be here before school and after school to work out and will be here every day during the summer just to improve. That is the mark of a true man.”

The 6-foot, 200-pound athlete is just one of the latest talents that are setting a high bar at Cedartown High School. Just like the Class of 2014 graduate Nick Chubb who went on to play for the University of Georgia and help propel those Bulldogs to the National Championship game against Alabama, and now is making his mark as a Cleveland Brown.

Or take Class of 2019 graduate Tony Mathis, who is this fall heading off to the University of West Virginia to don the Mountaineer gold and blue.

Pryor is headed off to a team on the rise as well after his decision this past May to commit to the Clemson Tigers ahead of his senior year. The incoming senior posted a video to announce his decision on Twitter.

There’s reason to feel good about Pryor in the season to come. He is considered the 55th best running back in the entire nation for the Class of 2020, and the 75th overall prospect in Georgia. His three-star ranking is projected trend upward after his commitment in this year’s Tigers recruiting class, and a strong senior season could possibly raise him even higher.

Oh, and by the way: he also participates in Track and Field in the spring. This past spring he took a fourth place in shot put in region competition, among other accolades for his talents.

Pryor has been part of a two-man backfield at Cedartown alongside Tony Mathis for the past few years. Mathis’ graduation opened the door this season for Pryor to lead a relatively young group of running backs that includes sophomore CJ Washington and freshman Harlem Diamond.

It’s not just his talent in the offensive backfield that makes him a great player for the Bulldogs however. Pryor in the 2018 season earned the team’s Defensive Player of the Year award, and was also named the Ironman Award for the team alongside Mathis. He’s been included in the list of players for the Rome News-Tribune’s annual All Area teams.

His role as a linebacker is just as important for the Bulldogs this year as in year’s past, and he’ll likely be featured just as much on defense as he is on offense.

This is fortunate for Bulldog fans, as Pryor is a born leader. As head coach Doyle Kelley said, “Kobe is a special player.”

“He is a leader, a guy that you can count on all the time,” Kelley said.

Back in May when he announced his commitment, Pryor said the experience he’s gone through over the past years to get to this point was positive.

“I have enjoyed my recruitment. All six schools in my final list are great situations for me to go into, but I have known where I am going for a couple weeks now,” Pryor said back in May. “Honestly, I just want to let everyone know which school that is and focus on preparing for next year.”

Although they already had a big time commit in the backfield in Bowman, the Clemson coaches told Pryor he will have a fair shot to work towards early playing time.

Before he goes anywhere, Pryor has business at home first. There’s still books to crack, tests to take and keeping in shape for what promises to be his biggest football season yet.

The school year started at the beginning of the month with the team heading back to the practice field in pads and helmets, and the routine of workouts and drills as first the Bulldogs faced Morrow, then headed for Chattooga for their scrimmage games.

What Pryor, who enters his final year as one of the key leaders on the field for the Bulldogs, wants most is the opportunity to lead the team to a region title, and opportunity for a shot at state.