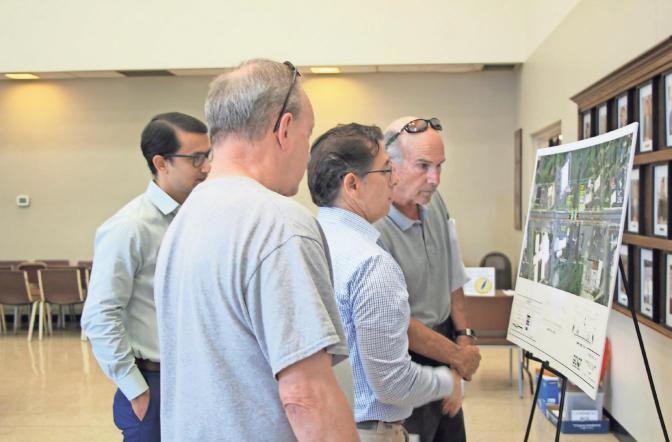 Plans were put up for people to look over and discuss with officials when they had questions over the process to replace a North Main Street bridge in Cedartown. GDOT organized the session to also take public comments.

Plans were put up for people to look over and discuss with officials when they had questions over the process to replace a North Main Street bridge in Cedartown. GDOT organized the session to also take public comments.

Officials from the Georgia Department of Transportation were joined by several from the City of Cedartown as well as the public came out to hear from officials themselves on plans for replacing the bridge on North Main Street.

It's still several years away from the start of construction, but the goal of the session was to start a process of figuring out the best way to detour around the construction, yet also allow access to local businesses for customers long acquainted with filling a prescription at Bradford Drugs on one side of the construction, or grabbing a pie at Pizza Hut on the other when the project starts.

Officials at the meeting from GDOT reported the replacement project isn't in their budget until the 2023 cycle, giving the city and state four years of planning and staging the bridge replacement ahead.

The proposed plans call for a whole new structure in place of the existing bridge over the Cedar Creek Tributary known as Skeeter Creek with a new structure and new roadway approaches. This bridge was built in 1938 and widened in 1949.

It is classified as having an unknown foundation. Due to the age of the bridge and its current conditions, it has been recommended for replacement by GDOT in a report posted on their website. The proposed mainline would consist of two 11-foot travel lanes, one 14-foot center turn lane with curb and gutter, and sidewalks.

It is anticipated the bridge will be closed to traffic and reconstructed in the existing location with an offsite detour. They additionally showed off their updated detour proposal as part of the session, held more as a meet and greet than a true town hall.

GDOT had a court reporter on hand to take down verbal comments, and also gave opportunity to also take written comments at the event but gave no formal presentation during the evening event to allow for more casual explanations of the project and for those curious about plans to peruse information at their own pace.

They are also taking additional public comments online at www.dot.ga.gov/PS/Public/PublicOutreach. Some navigation to the project, listed under Polk County and "SR1BU/US 27 over Cedar Creek Trib/Skeeter Branch will be required to find the comment link and leave thoughts about the proposal for GDOT to review and record.

Additionally, those willing can submit written statements concerning this project until Thursday, July 11, 2019.

Proposal documents online state the bridge is in fair condition overall and the deck in good condition, but the 81-year-old structure was built with a "H-15 vehicle, which is below current design standards."

GDOT is also planning to replace a section of the roadway north and south that will lead up to the new structure, starting 400 feet southwest of the Vance Avenue intersection and ending 260 northeast of the intersection with West Girard Avenue.

"Due to the age of the structure, structural integrity of the bridge pertaining to the design vehicle, and the unknown foundation of the substructure, replacement of this bridge is recommended," the report stated.

With all that in mind, GDOT will also have to work out how to handle currently buried utility lines and power poles near the structure. Those include gas, fiber optic lines for internet service, lines from AT&T, water and sewer from the City of Cedartown and Georgia Power electrical distribution lines.

The report stated that of two options available for the bridge's replacement, they are going with the $2.1 million cost and 12 month construction timetable.

Right now, the proposed detour route would take most traffic away from downtown Cedartown and out on the Highway 27 bypass. Additional routes on College Street are also available as a possibility for local residents or visitors heading downtown.