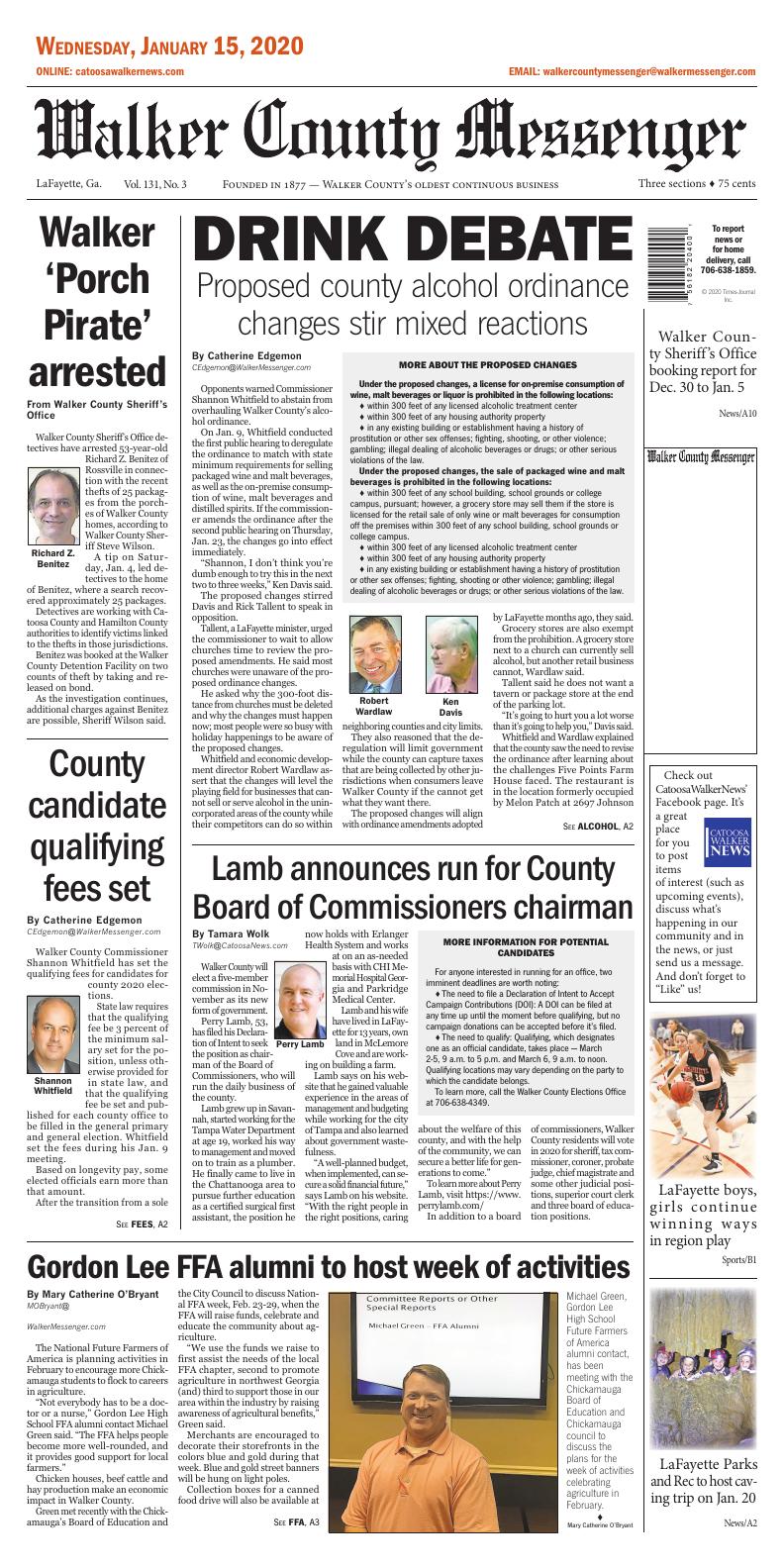 On Jan. 9, Whitfield conducted the first public hearing to deregulate the ordinance to match with state minimum requirements for selling packaged wine and malt beverages, as well as the on-premise consumption of wine, malt beverages and distilled spirits. If the commissioner amends the ordinance after the second public hearing on Thursday, Jan. 23, the changes go into effect immediately.

“Shannon, I don’t think you’re dumb enough to try this in the next two to three weeks,” Ken Davis said.

The proposed changes stirred Davis and Rick Tallent to speak in opposition.

Tallent, a LaFayette minister, urged the commissioner to wait to allow churches time to review the proposed amendments. He said most churches were unaware of the proposed ordinance changes.

He asked why the 300-foot distance from churches must be deleted and why the changes must happen now; most people were so busy with holiday happenings to be aware of the proposed changes.

Whitfield and economic development director Robert Wardlaw assert that the changes will level the playing field for businesses that cannot sell or serve alcohol in the unincorporated areas of the county while their competitors can do so within neighboring counties and city limits.

They also reasoned that the deregulation will limit government while the county can capture taxes that are being collected by other jurisdictions when consumers leave Walker County if the cannot get what they want there.

The proposed changes will align with ordinance amendments adopted by LaFayette months ago, they said.

Grocery stores are also exempt from the prohibition. A grocery store next to a church can currently sell alcohol, but another retail business cannot, Wardlaw said.

Tallent said he does not want a tavern or package store at the end of the parking lot.

Whitfield and Wardlaw explained that the county saw the need to revise the ordinance after learning about the challenges Five Points Farm House faced. The restaurant is in the location formerly occupied by Melon Patch at 2697 Johnson Road, Chickamauga.

The business is 20 yards outside of Chickamauga city limits and 297.5 feet from Friendship Missionary Baptist Church. The city ordinances does not prohibit alcohol consumption 300 feet from a church, according to Briggitt Garrett, Chickamauga zoning and planning administrator.

Rather than granting a variance for a single business, county officials said they opted to change the ordinance to treat all businesses equally.

When asked about the restaurant Wardlaw would like to build one day, he said the proposed location is in LaFayette, thereby subject to city codes and not affected by the proposed changes.

Whitfield said he does not drink.

Over the weekend, the restaurant posted on its Facebook page:

“We would like to officially speak for ourselves on the matter of the alcohol ordinance change in walker county. As a small business owner in a small town we have found it very difficult to keep a business afloat.

“Yes, we did ask the commissioner if there was a way that we could serve alcohol, and they have weighed every option to help. We have asked our customers if they would like it added to their dining experience, not to transition into a bar, just offer more drink options to have with a steak, or a fancy dish created by our chef. The majority of our customers said yes to the new drink additions, the others said it wouldn’t be any different then Logan’s or Applebee’s, and there we’re a few that were completely against it. We would love to please everyone, but we all know we cant.

“Having that said, we would like our supporters to know next week will be our last week, if sales continue the way they are. If the community believes in us and wants to see us successful then we hope they will come by this week, but if sales stay the same, we are sorry but we will have to close, so we can save money and possibly move to a more populated area.”

More about the proposed changes

Under the proposed changes, a license for on-premise consumption of wine, malt beverages or liquor is prohibited in the following locations:

Under the proposed changes, the sale of packaged wine and malt beverages is prohibited in the following locations:

Walker County will elect a five-member commission in November as its new form of government.

Perry Lamb, 53, has filed his Declaration of Intent to seek the position as chairman of the Board of Commissioners, who will run the daily business of the county.

Lamb grew up in Savannah, started working for the Tampa Water Department at age 19, worked his way to management and moved on to train as a plumber. He finally came to live in the Chattanooga area to pursue further education as a certified surgical first assistant, the position he now holds with Erlanger Health System and works at on an as-needed basis with CHI Memorial Hospital Georgia and Parkridge Medical Center.

Lamb and his wife have lived in LaFayette for 13 years, own land in McLemore Cove and are working on building a farm.

Lamb says on his website that he gained valuable experience in the areas of management and budgeting while working for the city of Tampa and also learned about government wastefulness.

“A well-planned budget, when implemented, can secure a solid financial future,” says Lamb on his website. “With the right people in the right positions, caring about the welfare of this county, and with the help of the community, we can secure a better life for generations to come.”

In addition to a board of commissioners, Walker County residents will vote in 2020 for sheriff, tax commissioner, coroner, probate judge, chief magistrate and some other judicial positions, superior court clerk and three board of education positions.

For anyone interested in running for an office, two imminent deadlines are worth noting:

Michael Green, Gordon Lee High School Future Farmers of America alumni contact, has been meeting with the Chickamauga Board of Education and Chickamauga council to discuss the plans for the week of activities celebrating agriculture in February.

The National Future Farmers of America is planning activities in February to encourage more Chickamauga students to flock to careers in agriculture.

“Not everybody has to be a doctor or a nurse,” Gordon Lee High School FFA alumni contact Michael Green said. “The FFA helps people become more well-rounded, and it provides good support for local farmers.”

Green met recently with the Chickamauga’s Board of Education and the City Council to discuss National FFA week, Feb. 23-29, when the FFA will raise funds, celebrate and educate the community about agriculture.

“We use the funds we raise to first assist the needs of the local FFA chapter, second to promote agriculture in northwest Georgia (and) third to support those in our area within the industry by raising awareness of agricultural benefits,” Green said.

Merchants are encouraged to decorate their storefronts in the colors blue and gold during that week. Blue and gold street banners will be hung on light poles.

Collection boxes for a canned food drive will also be available at assorted stores in Chickamauga.

“All the FFA chapters in the state of Georgia try to donate as much as they can,” Green said. “The food goes to the people in the community.”

Even people who did not attend Gordon Lee can participate in the FFA alumni’s efforts “to support young people who want to have a future in agriculture,” Green said.

“You don’t have to work on a family farm to promote agri-business,” he said.

A variety of different activities will take place throughout the week, including a fundraising night at Jack’s Restaurant in Chickamauga on Thursday, Feb. 27, from 4-8 p.m. with a percentage of the sales going to the FFA.

Weather permitting, a tractor show and parade will be held Saturday, Feb. 22.

A tip on Saturday, Jan. 4, led detectives to the home of Benitez, where a search recovered approximately 25 packages.

Detectives are working with Catoosa County and Hamilton County authorities to identify victims linked to the thefts in those jurisdictions.

Benitez was booked at the Walker County Detention Facility on two counts of theft by taking and released on bond.

As the investigation continues, additional charges against Benitez are possible, Sheriff Wilson said.

Based on longevity pay, some elected officials earn more than that amount.

The four board members, each representing a district, will receive $12,000 as a minimum base salary and pay a $300 qualifying fee. Their positions will be part-time. 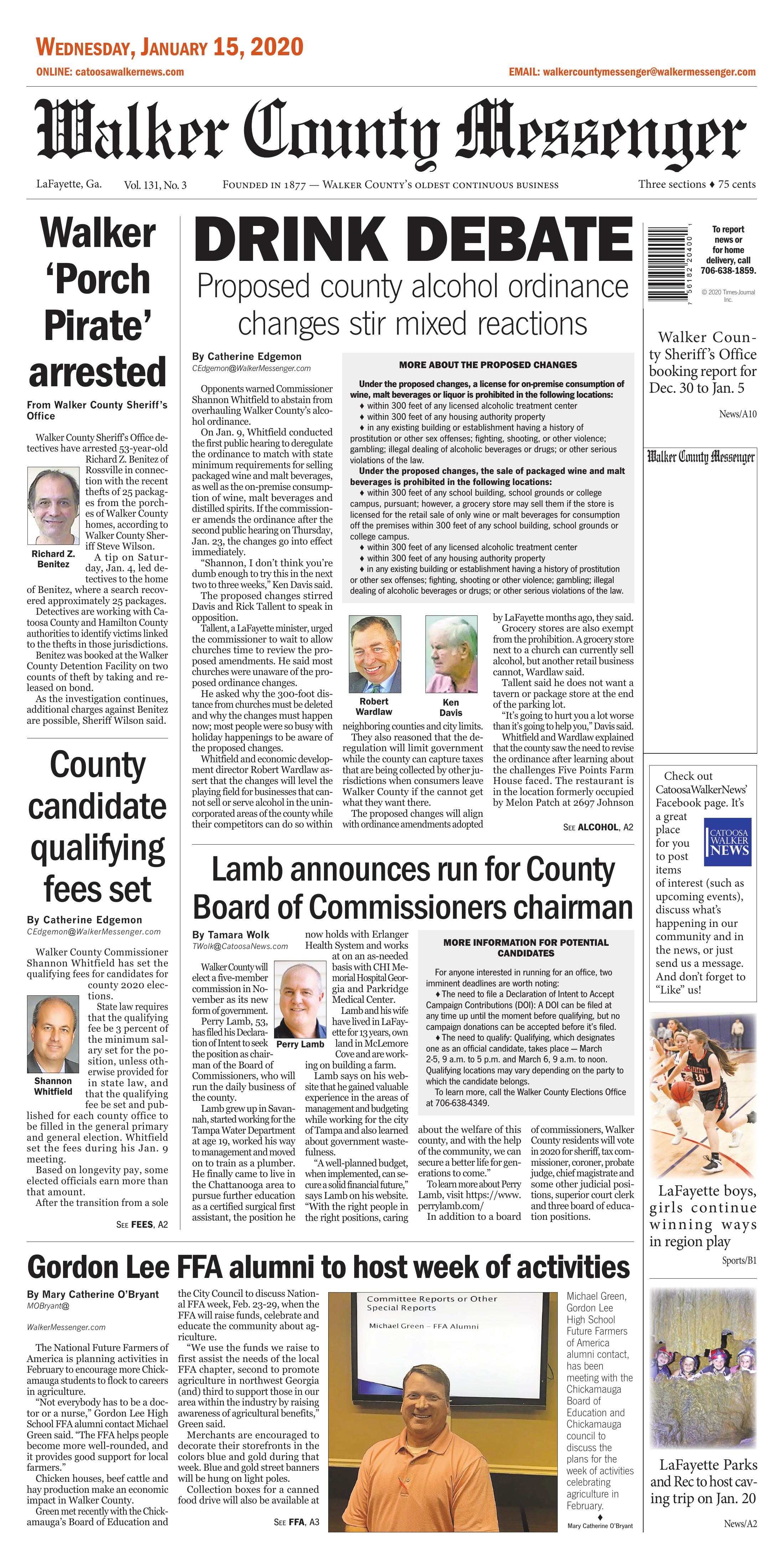