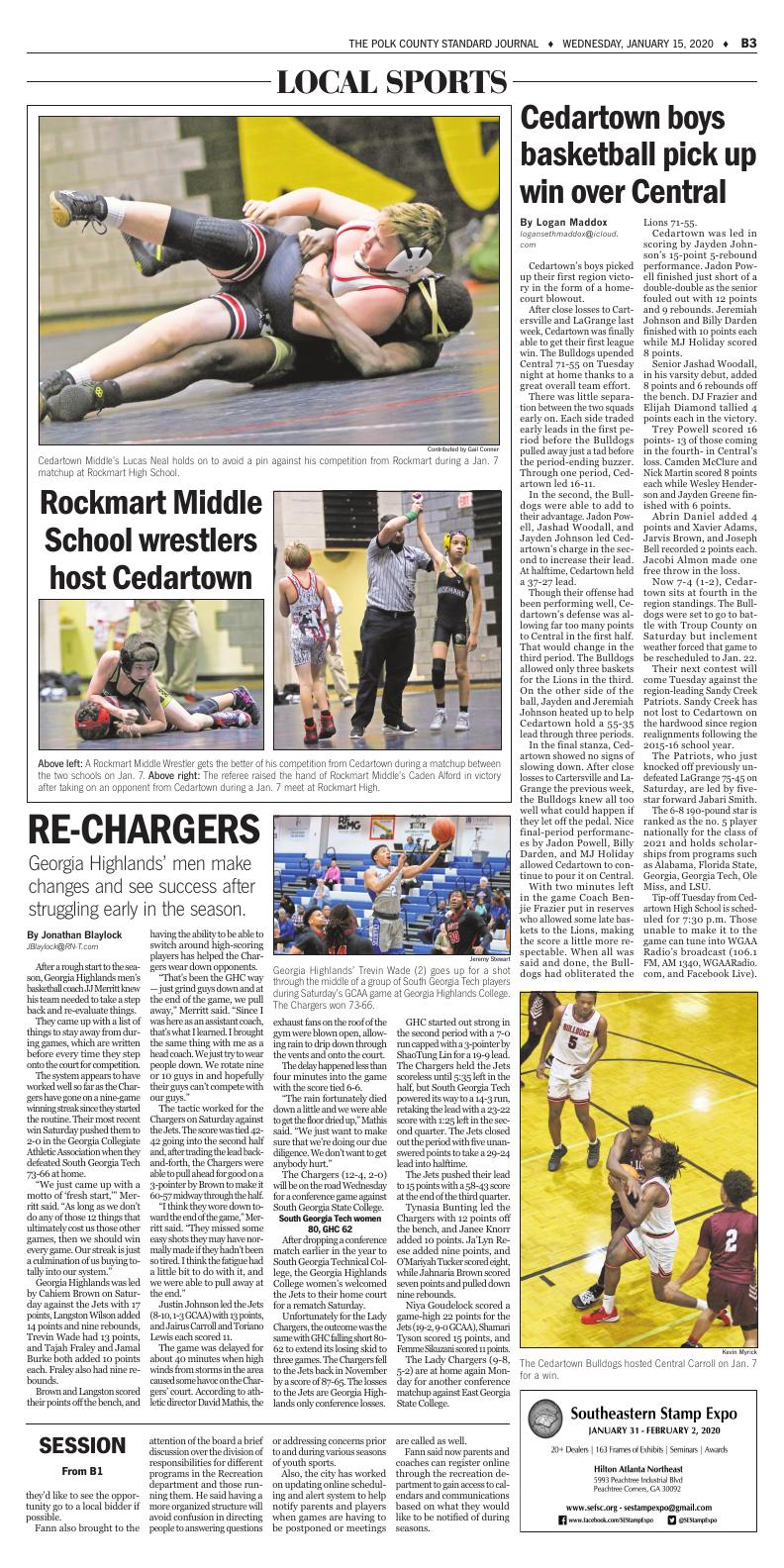 After a rough start to the season, Georgia Highlands men’s basketball coach JJ Merritt knew his team needed to take a step back and re-evaluate things.

They came up with a list of things to stay away from during games, which are written before every time they step onto the court for competition.

The system appears to have worked well so far as the Chargers have gone on a nine-game winning streak since they started the routine. Their most recent win Saturday pushed them to 2-0 in the Georgia Collegiate Athletic Association when they defeated South Georgia Tech 73-66 at home.

“We just came up with a motto of ‘fresh start,’” Merritt said. “As long as we don’t do any of those 12 things that ultimately cost us those other games, then we should win every game. Our streak is just a culmination of us buying totally into our system.”

Georgia Highlands was led by Cahiem Brown on Saturday against the Jets with 17 points, Langston Wilson added 14 points and nine rebounds, Trevin Wade had 13 points, and Tajah Fraley and Jamal Burke both added 10 points each. Fraley also had nine rebounds.

Brown and Langston scored their points off the bench, and having the ability to be able to switch around high-scoring players has helped the Chargers wear down opponents.

“That’s been the GHC way — just grind guys down and at the end of the game, we pull away,” Merritt said. “Since I was here as an assistant coach, that’s what I learned. I brought the same thing with me as a head coach. We just try to wear people down. We rotate nine or 10 guys in and hopefully their guys can’t compete with our guys.”

The tactic worked for the Chargers on Saturday against the Jets. The score was tied 42-42 going into the second half and, after trading the lead back-and-forth, the Chargers were able to pull ahead for good on a 3-pointer by Brown to make it 60-57 midway through the half.

“I think they wore down toward the end of the game,” Merritt said. “They missed some easy shots they may have normally made if they hadn’t been so tired. I think the fatigue had a little bit to do with it, and we were able to pull away at the end.”

The game was delayed for about 40 minutes when high winds from storms in the area caused some havoc on the Chargers’ court. According to athletic director David Mathis, the exhaust fans on the roof of the gym were blown open, allowing rain to drip down through the vents and onto the court.

The delay happened less than four minutes into the game with the score tied 6-6.

“The rain fortunately died down a little and we were able to get the floor dried up,” Mathis said. “We just want to make sure that we’re doing our due diligence. We don’t want to get anybody hurt.”

The Chargers (12-4, 2-0) will be on the road Wednesday for a conference game against South Georgia State College.

After dropping a conference match earlier in the year to South Georgia Technical College, the Georgia Highlands College women’s welcomed the Jets to their home court for a rematch Saturday.

Unfortunately for the Lady Chargers, the outcome was the same with GHC falling short 80-62 to extend its losing skid to three games. The Chargers fell to the Jets back in November by a score of 87-65. The losses to the Jets are Georgia Highlands only conference losses.

GHC started out strong in the second period with a 7-0 run capped with a 3-pointer by ShaoTung Lin for a 19-9 lead. The Chargers held the Jets scoreless until 5:35 left in the half, but South Georgia Tech powered its way to a 14-3 run, retaking the lead with a 23-22 score with 1:25 left in the second quarter. The Jets closed out the period with five unanswered points to take a 29-24 lead into halftime.

The Jets pushed their lead to 15 points with a 58-43 score at the end of the third quarter.

The Lady Chargers (9-8, 5-2) are at home again Monday for another conference matchup against East Georgia State College.

Commissioners Dale Tuck and Jessica Payton listened in as City Manager Bill Fann talked about bid options for the next phase of the new Goodyear Park Soccer Complex.

The next phase of the Goodyear Park Soccer Complex in Cedartown is coming up toward bidding as the city looks to add amenities for the West Avenue soccer fields.

City Manager Bill Fann brought along a state bid package for a new concession stand and bathroom at the soccer complex to the City Commission’s attention at their latest work session to give them an option of where they wanted to go next.

Fann said the city is looking to provide a men’s and women’s room on the site alongside a place to purchase snacks and drinks that would be the second phase of construction on the complex that began last year. Though the field is setup and fencing installed, it is currently closed off for public use until sod on the fields has a chance to establish itself and the concession stand can be added.

His hopes are that the city can have the 26-foot square block building completed in time for the spring opening day of the soccer season so youth can begin utilizing the complex fully.

However, he put before the Commission an option: either take the state bid price, or put it out for bid for local contractors to try and pick up the business.

“We would need to do that immediately to get that done and get bids back by February, so we can have a commitment for a successful bidder almost immediately,” Fann said.

The commission agreed that they’d like to see the opportunity go to a local bidder if possible.

Fann also brought to the attention of the board a brief discussion over the division of responsibilities for different programs in the Recreation department and those running them. He said having a more organized structure will avoid confusion in directing people to answering questions or addressing concerns prior to and during various seasons of youth sports.

Also, the city has worked on updating online scheduling and alert system to help notify parents and players when games are having to be postponed or meetings are called as well.

Fann said now parents and coaches can register online through the recreation department to gain access to calendars and communications based on what they would like to be notified of during seasons.

The Cedartown Bulldogs hosted Central Carroll on Jan. 7 for a win.

Cedartown’s boys picked up their first region victory in the form of a home-court blowout.

After close losses to Cartersville and LaGrange last week, Cedartown was finally able to get their first league win. The Bulldogs upended Central 71-55 on Tuesday night at home thanks to a great overall team effort.

There was little separation between the two squads early on. Each side traded early leads in the first period before the Bulldogs pulled away just a tad before the period-ending buzzer. Through one period, Cedartown led 16-11.

In the second, the Bulldogs were able to add to their advantage. Jadon Powell, Jashad Woodall, and Jayden Johnson led Cedartown’s charge in the second to increase their lead. At halftime, Cedartown held a 37-27 lead.

Though their offense had been performing well, Cedartown’s defense was allowing far too many points to Central in the first half. That would change in the third period. The Bulldogs allowed only three baskets for the Lions in the third. On the other side of the ball, Jayden and Jeremiah Johnson heated up to help Cedartown hold a 55-35 lead through three periods.

In the final stanza, Cedartown showed no signs of slowing down. After close losses to Cartersville and LaGrange the previous week, the Bulldogs knew all too well what could happen if they let off the pedal. Nice final-period performances by Jadon Powell, Billy Darden, and MJ Holiday allowed Cedartown to continue to pour it on Central.

With two minutes left in the game Coach Benjie Frazier put in reserves who allowed some late baskets to the Lions, making the score a little more respectable. When all was said and done, the Bulldogs had obliterated the Lions 71-55.

Cedartown was led in scoring by Jayden Johnson’s 15-point 5-rebound performance. Jadon Powell finished just short of a double-double as the senior fouled out with 12 points and 9 rebounds. Jeremiah Johnson and Billy Darden finished with 10 points each while MJ Holiday scored 8 points.

Senior Jashad Woodall, in his varsity debut, added 8 points and 6 rebounds off the bench. DJ Frazier and Elijah Diamond tallied 4 points each in the victory.

Trey Powell scored 16 points- 13 of those coming in the fourth- in Central’s loss. Camden McClure and Nick Martin scored 8 points each while Wesley Henderson and Jayden Greene finished with 6 points.

Now 7-4 (1-2), Cedartown sits at fourth in the region standings. The Bulldogs were set to go to battle with Troup County on Saturday but inclement weather forced that game to be rescheduled to Jan. 22.

Their next contest will come Tuesday against the region-leading Sandy Creek Patriots. Sandy Creek has not lost to Cedartown on the hardwood since region realignments following the 2015-16 school year.

The Patriots, who just knocked off previously undefeated LaGrange 75-45 on Saturday, are led by five-star forward Jabari Smith.

The 6-8 190-pound star is ranked as the no. 5 player nationally for the class of 2021 and holds scholarships from programs such as Alabama, Florida State, Georgia, Georgia Tech, Ole Miss, and LSU.

Tip-off Tuesday from Cedartown High School is scheduled for 7:30 p.m. Those unable to make it to the game can tune into WGAA Radio’s broadcast (106.1 FM, AM 1340, WGAARadio.com, and Facebook Live). 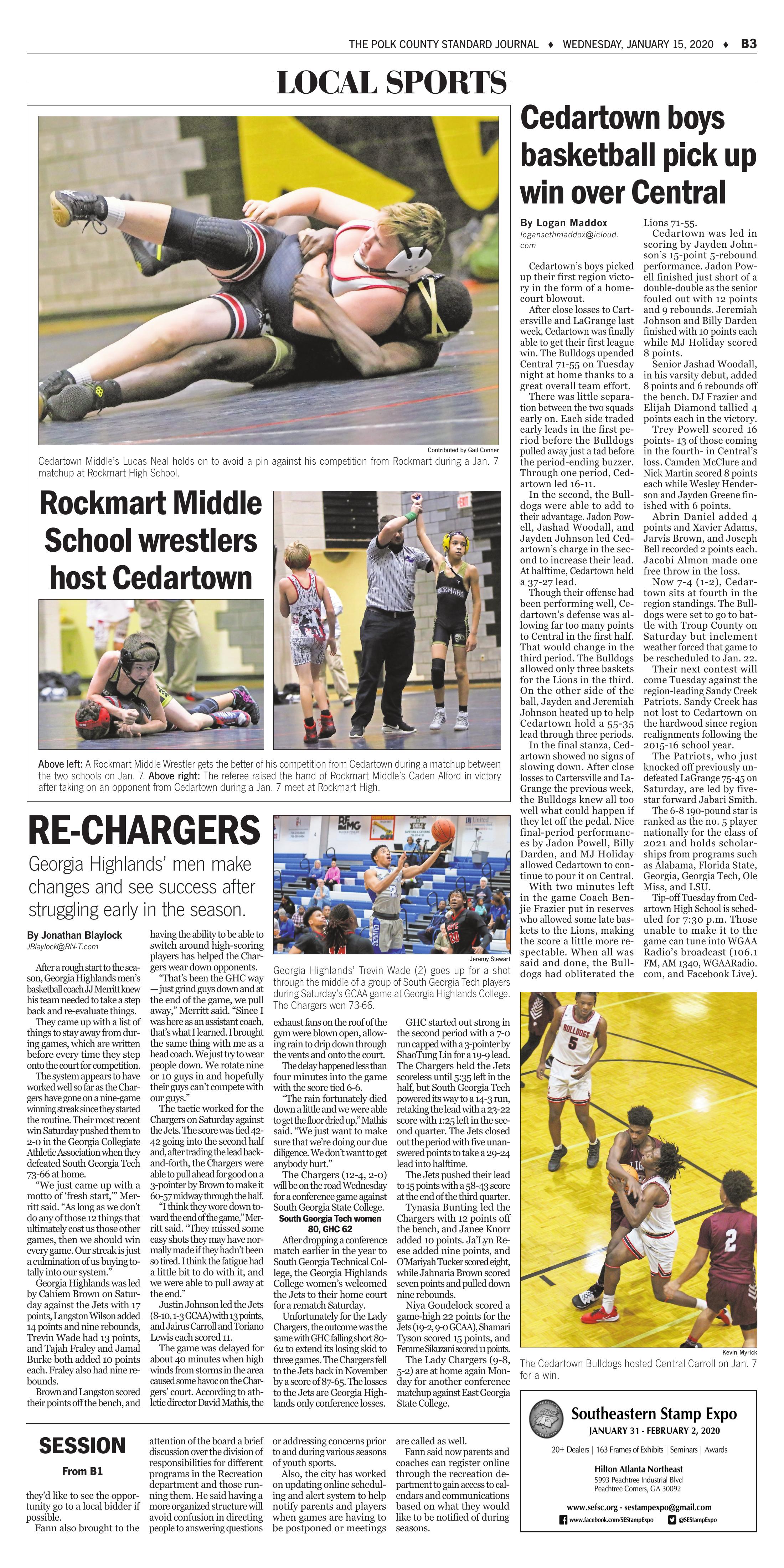