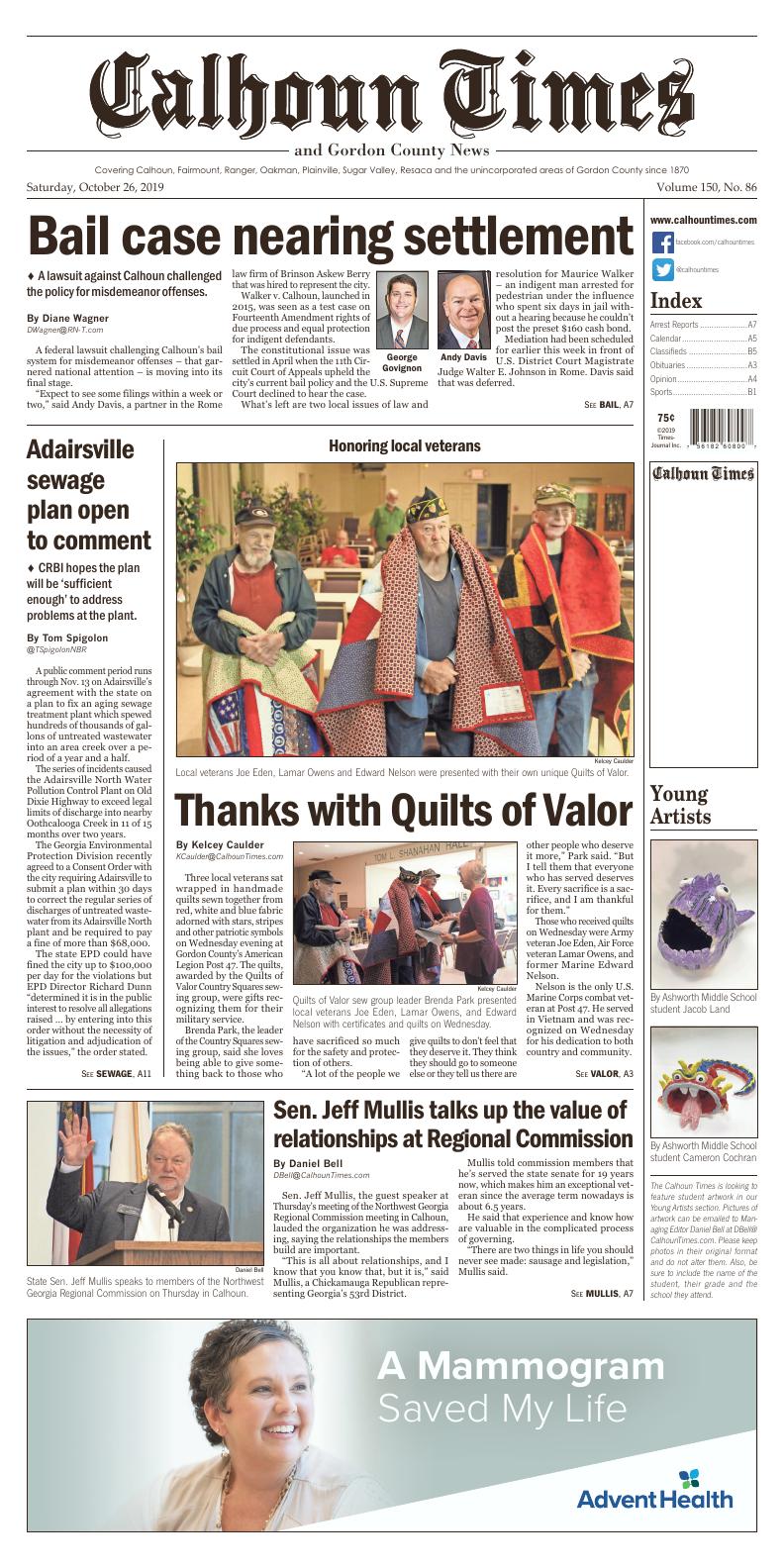 A federal lawsuit challenging Calhoun's bail system for misdemeanor offenses – that garnered national attention – is moving into its final stage.

"Expect to see some filings within a week or two," said Andy Davis, a partner in the Rome law firm of Brinson Askew Berry that was hired to represent the city.

Walker v. Calhoun, launched in 2015, was seen as a test case on Fourteenth Amendment rights of due process and equal protection for indigent defendants.

The constitutional issue was settled in April when the 11th Circuit Court of Appeals upheld the city's current bail policy and the U.S. Supreme Court declined to hear the case.

What's left are two local issues of law and resolution for Maurice Walker – an indigent man arrested for pedestrian under the influence who spent six days in jail without a hearing because he couldn't post the preset $160 cash bond.

Mediation had been scheduled for earlier this week in front of U.S. District Court Magistrate Judge Walter E. Johnson in Rome. Davis said that was deferred.

"We've had some discussions and are trying to work everything out. Other than finalizing it, there's not much left to do," Davis said.

The Southern Center for Human Rights, representing Walker, wants a permanent injunction preventing Calhoun from reverting to its previous system for bail.

The city changed its policy after Walker's lawsuit was filed. A Standing Bail Order now sets bond amounts according to the offense, and a hearing is guaranteed within 48 hours of arrest. The old policy was deemed unconstitutional because incarceration was based on the ability to pay.

Also, Calhoun's attorneys want an order decertifying the class-status initially granted the case. It includes all inmates who had been arrested and not released on bond under the old system. "When the case came back from the 11th circuit, there was still a class issue and still claims for damages by Mr. Walker," Davis said.

Senior U.S. District Judge Harold Murphy transferred the case to Johnson for mediation, denying the pending motions without prejudice because attorneys said a settlement had been reached.

Davis said this week the case is all but closed, adding that Calhoun City Attorney George Govignon deserves much of the credit. The nearly four years of litigation, he said, resulted in confirmation that cash bail is legal.

"At the end of the day, the city of Calhoun prevailed on a policy that allows a 48-hour period to have a hearing to determine bail or indigency," Davis said. "The policy put in place after Mr. Walker was arrested was upheld."

Adairsville sewage plan open to comment
• CRBI hopes the plan will be 'sufficient enough' to address problems at the plant.
By Tom Spigolon
@TSpigolonNBR
10.26.19

A public comment period runs through Nov. 13 on Adairsville's agreement with the state on a plan to fix an aging sewage treatment plant which spewed hundreds of thousands of gallons of untreated wastewater into an area creek over a period of a year and a half.

The series of incidents caused the Adairsville North Water Pollution Control Plant on Old Dixie Highway to exceed legal limits of discharge into nearby Ooth calooga Creek in 11 of 15 months over two years.

The Georgia Environmental Protection Division recently agreed to a Consent Order with the city requiring Adairsville to submit a plan within 30 days to correct the regular series of discharges of untreated wastewater from its Adairsville North plant and be required to pay a fine of more than $68,000.

The state EPD could have fined the city up to $100,000 per day for the violations but EPD Director Richard Dunn "determined it is in the public interest to resolve all allegations raised ... by entering into this order without the necessity of litigation and adjudication of the issues," the order stated.

James Cooley, director of district operations for the Georgia EPD, said the Consent Order "is an agreement between the city and the EPD to correct the issues and return the facility to compliance."

He said he considers "all water quality issues serious."

Lisa Eury, manager of the city's water and wastewater plants, said any significant rainfall causes stormwater to enter the system through sewer line breaks or open manholes and cause the city to exceed its permitted wastewater discharge limits.

She said the city has spent about $300,000 to locate places in its 52 miles of sewer lines where stormwater inflow and infiltration is occurring.

The city has used everything from smoke tests to GPS mapping to locate line breaks and manholes — some of which the city had lost track of over the decades, Eury said.

The city also is using more than $11 million in low-interest loans from the Georgia Environmental Finance Authority — a state agency created in part to help local governments build and upgrade water and wastewater treatment systems.

The funding is allowing the city to double the capacity of the wastewater plant to 2 million gallons per day by early 2021, Eury said.

The Consent Order stated the EPD and city discussed a plan for the city to fix the problems with the Adairsville North plant after the plant discharged 118,000 gallons of untreated wastewater into a tributary of Oothcalooga Creek in December 2017.

However, it discharged about 118,000 additional gallons into the creek and tributary in 11 separate incidents in the following 12 months — including three times each in February, May and December.

Even after the city received a new discharge permit in February of this year, the plant continued to discharge an additional 134,000 gallons of untreated wastewater in four separate incidents in February and March, the order stated.

It also exceeded its monthly and weekly effluent and other limits in its permit in 10 separate months between February 2018 and April 2019.

Jesse Demonbreun-Chapman, who heads the nonprofit, said his group knew of discharge problems at the plant.

"Until this notice, we weren't aware of the extent of the problem there," he said.

"We have typically been trying to keep an eye on all of these wastewater treatment plants as they reopen and renew their permits. To a large extent, they don't typically have this type of chronic issue."

He said his group wants to make sure Adairsville's plan "will be sufficient enough to address the problems at that facility" and the EPD follows up with operators "in a timely manner" about making deadlines the agency sets for the plants.

Local veterans Joe Eden, Lamar Owens and Edward Nelson were presented with their own unique Quilts of Valor.

Three local veterans sat wrapped in handmade quilts sewn together from red, white and blue fabric adorned with stars, stripes and other patriotic symbols on Wednesday evening at Gordon County's American Legion Post 47. The quilts, awarded by the Quilts of Valor Country Squares sewing group, were gifts recognizing them for their military service.

Brenda Park, the leader of the Country Squares sewing group, said she loves being able to give something back to those who have sacrificed so much for the safety and protection of others.

"A lot of the people we give quilts to don't feel that they deserve it. They think they should go to someone else or they tell us there are other people who deserve it more," Park said. "But I tell them that everyone who has served deserves it. Every sacrifice is a sacrifice, and I am thankful for them."

Nelson is the only U.S. Marine Corps combat veteran at Post 47. He served in Vietnam and was recognized on Wednesday for his dedication to both country and community.

Eden was drafted into the Army in 1953. He completed basic training at Fort Jackson in South Carolina and later moved to Camp Gordon. Later, he was sent overseas to Germany and France. He was discharged in 1955.

Quilts of Valor is a nonprofit foundation dedicated to covering all service members and veterans touched by war with "comforting and healing" quilts. To get involved with the Quilts of Valor Country Squares sewing group, contact Brenda Park at cybcpark@yahoo.com. To donate to the group, visit quovf.com and refer donations to QOV Country Squares.

The American Legion Post 47 will host its annual Veterans Dinner at the National Guard Armory in downtown Calhoun on Nov. 9 beginning at 6 p.m. This has historically been a popular event around Veterans Day that gathers a crowd of more than 350 people. The community is invited.

Sen. Jeff Mullis, the guest speaker at Thursday's meeting of the Northwest Georgia Regional Commission meeting in Calhoun, lauded the organization he was addressing, saying the relationships the members build are important.

"This is all about relationships, and I know that you know that, but it is," said Mullis, a Chickamauga Republican representing Georgia's 53rd District.

Mullis told commission members that he's served the state senate for 19 years now, which makes him an exceptional veteran since the average term nowadays is about 6.5 years.

He said that experience and know how are valuable in the complicated process of governing.

"There are two things in life you should never see made: sausage and legislation," Mullis said.

The senator also reminded commission members that state lawmakers are only part time legislators, and that they all have regular jobs when they aren't at the Capitol. He said that's another reason that having relationships with regional leaders is valuable to him and to local commissioners and county commissions and their members.

He also said he is ready and willing to help them however he can.

"If I could be of service to you, my office is always open," Mullis said.

In other business, the commission also approved the nomination of five members to a nominating committee for the 2020 council meeting for the election of its officers. They also tentatively approved the commission's regional plan, pending approval of state-required updates.

The plan had previously been submitted for state approval, but a few changes were suggested. The commission tentatively OK'd the plan with those changes made, pending state approval.

Thursday's meeting with the final meeting of the year for the commission. 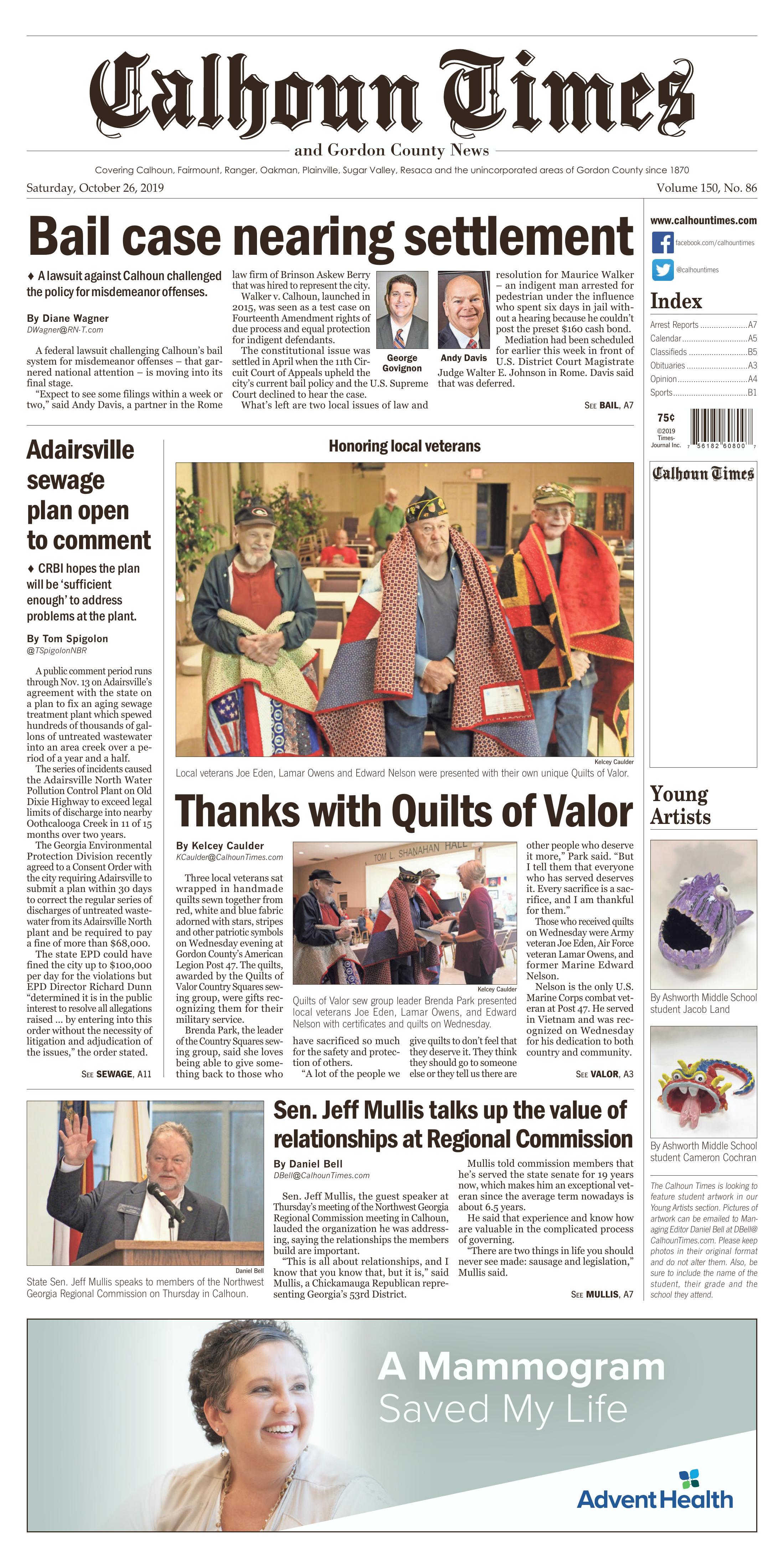