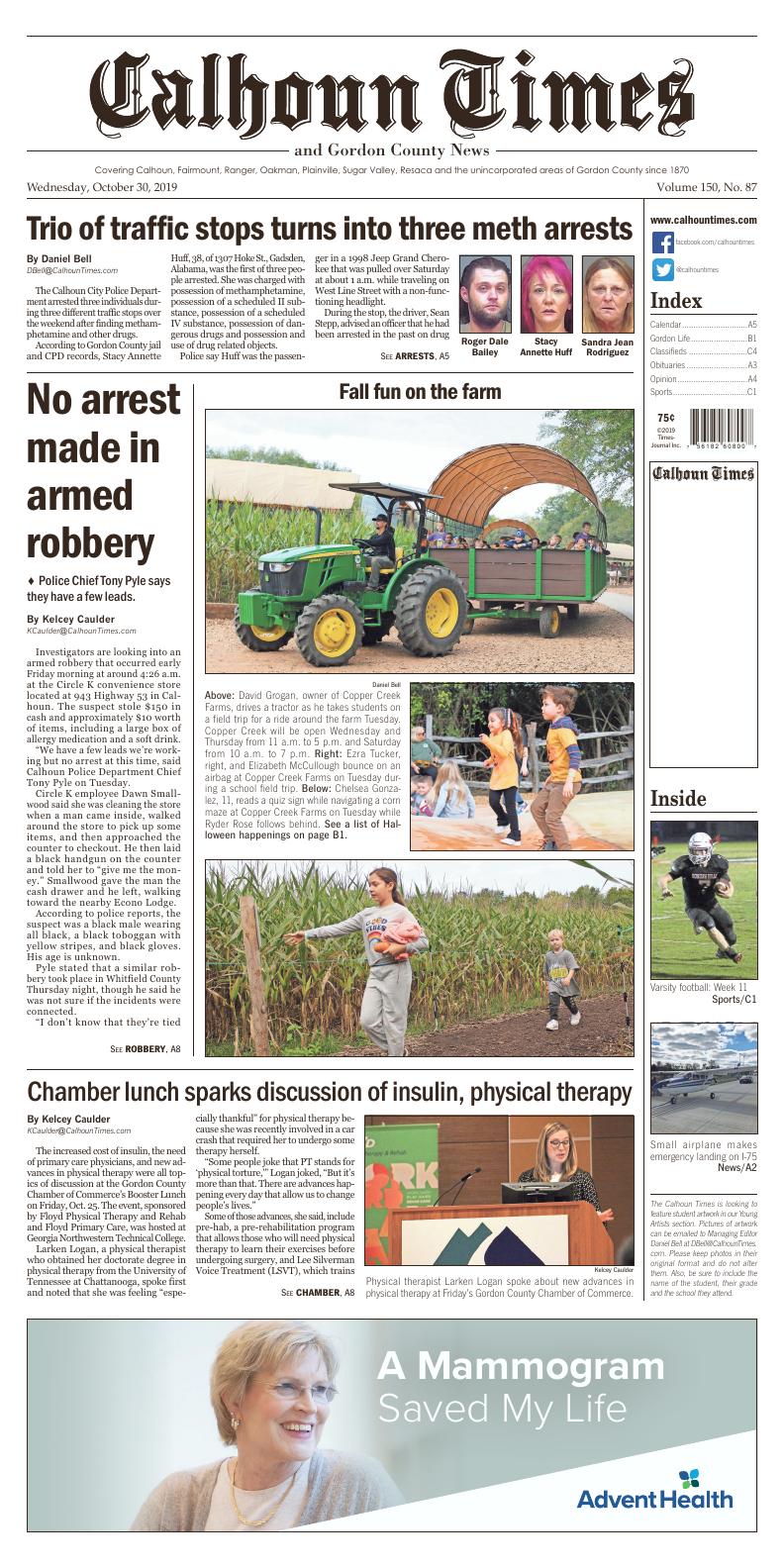 The Calhoun City Police Department arrested three individuals during three different traffic stops over the weekend after finding methamphetamine and other drugs.

Police say Huff was the passenger in a 1998 Jeep Grand Cherokee that was pulled over Saturday at about 1 a.m. while traveling on West Line Street with a non-functioning headlight.

During the stop, the driver, Sean Stepp, advised an officer that he had been arrested in the past on drug

charges. The officer also observed both Stepp and Huff "making furtive movements" and being "extremely talkative."

Stepp agreed to a search of his vehicle. A second officer searched a wallet and cigarette pack that Huff was holding when she exited the vehicle and found a straw with suspected meth inside the cigarette pack and multiple pills inside the wallet. A tin containing a crystal substance and five straws all containing substance believed to be meth, as well as three more pills, were found inside Huff's purse.

The pills are believed to be Alprazolam, Clonazepam, Gabapentin and Oxycodone.

Huff was arrested and Stepp was released with a warning for the headlight.

The second traffic stop turned drug arrest occurred just after 1 a.m. Sunday when police pulled over a 2008 Honda CR-V because of a non-working brake light on North Wall Street near Line Street. The vehicle also was missing a tag light and only had a test drive tag.

An officer noticed the driver, Roger Dale Bailey, 32, of 5 York Drive N.E., Plainville, reaching toward the front passenger door as he approached the vehicle. The officer also noticed that Bailey was "extremely nervous and making furtive movements." Bailey also told the officer he had been arrested on drug charges in the past.

Bailey consented to a search and the officer found a storage draw under the front passenger seat that contained a clear glass smoking device with suspected meth residue and a black bag containing 8.1 grams of suspected meth.

The third drug arrest happened about an hour and a half later when police pulled over Sandra Jean Rodriquez, 55, of 509 Hazel St., Calhoun, on South Wall Street for making an improper right turn.

The officer noticed Rodriguez was shaking when she handed over her license and insurance card, and he also recognized her as someone known to live in a house known for narcotics.

Rodriguez gave permission to search the vehicle and admitted there was methamphetamine in her purse. While searching the purse, the officer noticed Rodriguez leaning over the fender of his patrol vehicle. When he did not find any drugs in the purse, Rodriguez responded that she must have dropped them somewhere.

The officer then found a clear plastic baggie containing a crystal substance believed to be meth on the ground near the fender of his vehicle where Rodriguez had been standing.

Rodriguez was arrested and charged with possession of methamphetamine, improper right turn and an expired tag.

No arrest made in armed robbery
• Police Chief Tony Pyle says they have a few leads.
By Kelcey Caulder
KCaulder@CalhounTimes.com
10.30.19

Investigators are looking into an armed robbery that occurred early Friday morning at around 4:26 a.m. at the Circle K convenience store located at 943 Highway 53 in Calhoun. The suspect stole $150 in cash and approximately $10 worth of items, including a large box of allergy medication and a soft drink.

"We have a few leads we're working but no arrest at this time, said Calhoun Police Department Chief Tony Pyle on Tuesday.

Circle K employee Dawn Smallwood said she was cleaning the store when a man came inside, walked around the store to pick up some items, and then approached the counter to checkout. He then laid a black handgun on the counter and told her to "give me the money." Smallwood gave the man the cash drawer and he left, walking toward the nearby Econo Lodge.

According to police reports, the suspect was a black male wearing all black, a black toboggan with yellow stripes, and black gloves. His age is unknown.

Pyle stated that a similar robbery took place in Whitfield County Thursday night, though he said he was not sure if the incidents were connected.

"I don't know that they're tied

together but it's in close proximity, so that is something we are looking into," he said. "If so, that would help us in finding out who it is. The more they do this, the easier it is to find them."

The Calhoun Police Department is requesting help identifying the suspect. Those with information may contact them at 706629-1234.

David Grogan, owner of Copper Creek Farms, drives a tractor as he takes students on a field trip for a ride around the farm Tuesday. Copper Creek will be open Wednesday and Thursday from 11 a.m. to 5 p.m. and Saturday from 10 a.m. to 7 p.m.

Ezra Tucker, right, and Elizabeth McCullough bounce on an airbag at Copper Creek Farms on Tuesday during a school field trip.

Chelsea Gonzalez, 11, reads a quiz sign while navigating a corn maze at Copper Creek Farms on Tuesday while Ryder Rose follows behind.

The increased cost of insulin, the need of primary care physicians, and new advances in physical therapy were all topics of discussion at the Gordon County Chamber of Commerce's Booster Lunch on Friday, Oct. 25. The event, sponsored by Floyd Physical Therapy and Rehab and Floyd Primary Care, was hosted at Georgia Northwestern Technical College.

Larken Logan, a physical therapist who obtained her doctorate degree in physical therapy from the University of Tennessee at Chattanooga, spoke first and noted that she was feeling "espe cially thankful" for physical therapy because she was recently involved in a car crash that required her to undergo some therapy herself.

"Some people joke that PT stands for 'physical torture,'" Logan joked, "But it's more than that. There are advances happening every day that allow us to change people's lives."

Some of those advances, she said, include pre-hab, a pre-rehabilitation program that allows those who will need physical therapy to learn their exercises before undergoing surgery, and Lee Silverman Voice Treatment (LSVT), which trains

individuals with Parkinson's disease to use their body more normally.

"It can be tailored to meet the client's needs, whatever they may be," Logan said. "I have seen it take someone from being in a wheelchair to using a cane to walking without any aid."

Logan also praised kinesiotaping, a treatment designed to speed up the body's natural healing process while supporting and stabilizing muscles and joints without restricting range of motion, and dry needling, a treatment similar to acupuncture that helps to decrease muscle tightness, increase blood flow, and reduce pain.

Next up to speak was Dr. Timothy Snodgrass of Floyd Primary Care.

Snodgrass discussed why having a primary care physician is of the utmost importance. Not only do they assist with preventative care, but they can also help their patients remember when to do things like get a flu shot or mammogram.

"They can help you address risk factors and warning signs early," Snodgrass said, listing off cancer, obesity and diabetes as examples of illnesses doctors can help identify and treat early. "That's why you should have a primary care doctor."

He then discussed diabetes in more detail, noting that it is occurring in increasingly high numbers in the Calhoun-Gordon County community. The warning signs, he said, include near-constant hunger or thirst, blurred vision, unexplained weight loss, and numbness in hands and feet.

"It's important that you see a primary care doctor if you have those symptoms," Snodgrass said. "If you're diabetic, you are at the same level of risk for a heart attack as someone who has already had one."

After he spoke, audience members asked why the cost of insulin was so expensive. Snodgrass called the cost "awful" and said was related to "Big Pharma." 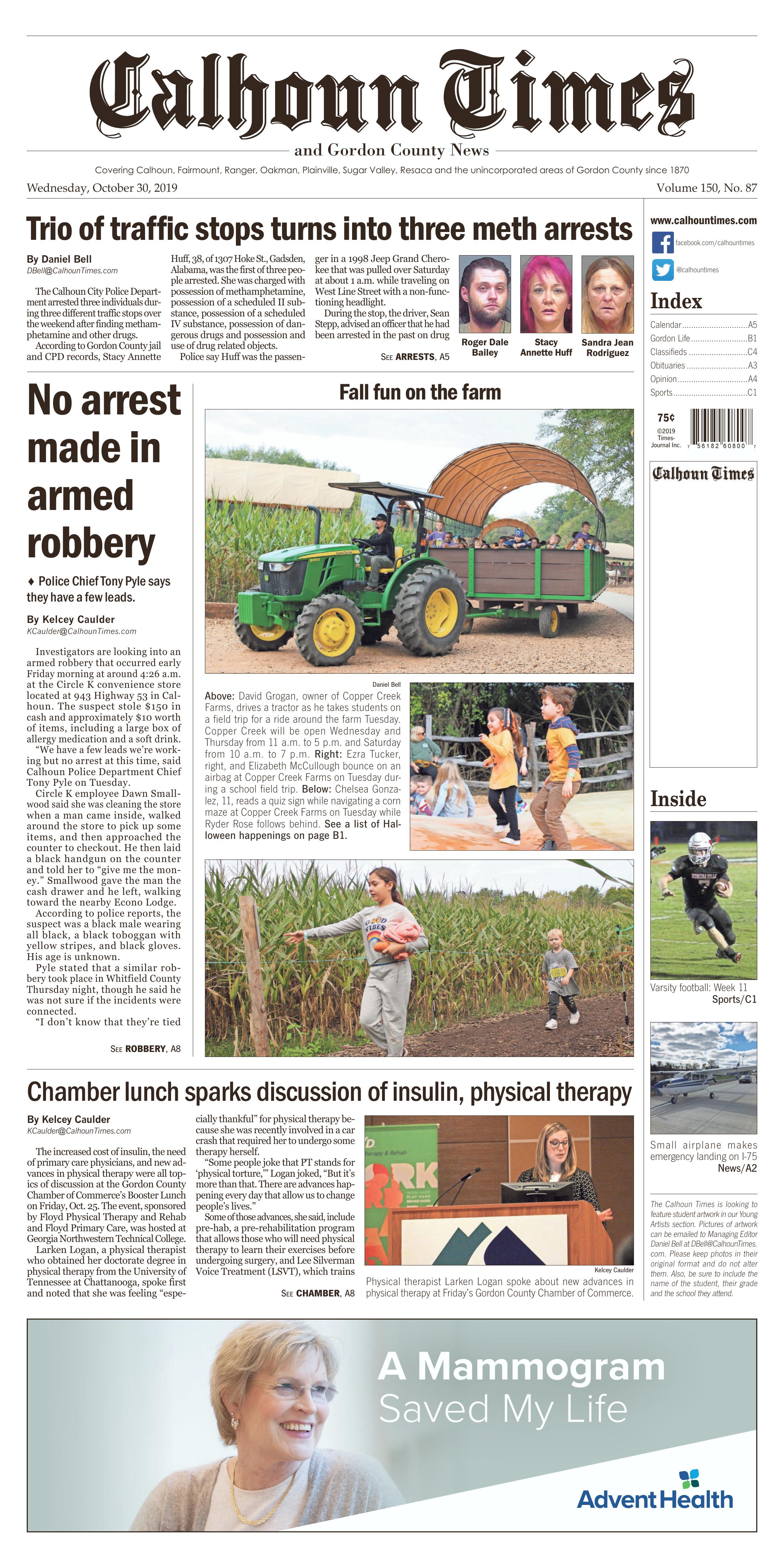