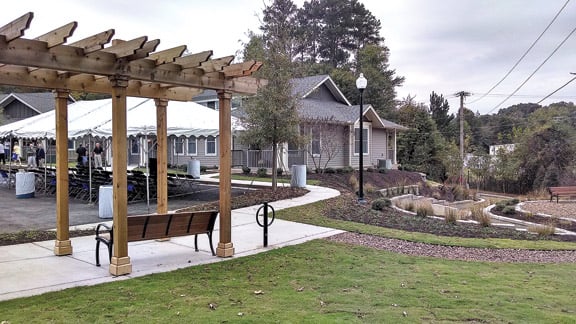 The landscaped outdoor entertainment area, complete with a covered eating area and community grill, will hopefully help foster a sense of community among the residents of the new housing units. (Messenger photo/Christi McEntyre) 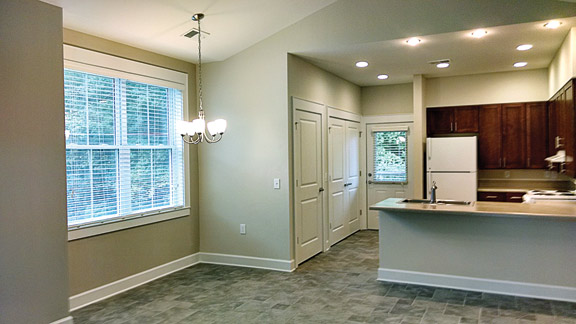 Spacious interiors and modern amenities are standard in each two- and three-bedroom duplex in the new Hill High Court. (Messenger photo/Christi McEntyre)

The landscaped outdoor entertainment area, complete with a covered eating area and community grill, will hopefully help foster a sense of community among the residents of the new housing units. (Messenger photo/Christi McEntyre)

Spacious interiors and modern amenities are standard in each two- and three-bedroom duplex in the new Hill High Court. (Messenger photo/Christi McEntyre)

On Wednesday, Oct. 16, the LaFayette Housing Authority held a ceremonial ribbon-cutting to celebrate the finished results of an 11-year labor of love.

An array of gleaming new duplexes at two locations in LaFayette – collectively called Hill High Court – represent a new era of public housing for the citizens of the city.

The concept and planning for the project has been ongoing, in one form or another, since 2002, said LaFayette Housing Authority director Ruth Bass. She originally recognized that the 30 outdated units at the end of Foster Circle were not only a hard sell to housing authority consumers, but were also substandard and inadequate for the needs of the citizens of LaFayette.

Cracked foundations and crumbling structures made for unsafe living conditions as well as exorbitant upkeep costs and replacements for those buildings had been needed for many years.

“They were all crammed up, and we wanted space,” Bass said. “These are family units, and kids need space.”

Unfortunately, the area where the apartment buildings were located only had enough space to place a limited number of the duplex-style housing units that had been planned —another location was needed.

The housing authority found a site that met its needs halfway across town, at the site of a neglected piece of local history.

“We found what we’ve been calling the Culberson site, which is where the old Hill High School was,” Bass said. “We’re very cognizant of the history of the Hill High School. It was the first African-American high school in Walker County.”

The Hill High School site burned in 1973, and has gone mostly unused since. Now, it serves as a hope for a new, revitalized future for many of LaFayette’s citizens.

The LaFayette Housing Authority found an ingenious way to fund this ambitious project. The authority’s plan involved tearing down the four three-story apartment-style buildings on Foster Circle, and rebuilding the 30 units into modern, spacious and energy-efficient duplexes.

“We did not ask for any special monies whatsoever,” Bass said. “All of this was paid for with money that was given to us and we just banked.”

Bass was referring to federal funds provided by HUD, the U.S. Department of Housing and Urban Development.

“They would give us our operating money to do day-to-day business and then they would give us what they called capital money to do big projects – roofs, air conditioning, things like that,” Bass said. “Well, we handled the money so well, they gave us way too much. And they don’t want it back, so we were just putting it in CDs, and we had a lot of money all of a sudden.”

By August of 2011, the local housing authority found enough had been saved over the years to permit signing on the dotted line to begin construction.

“Because of being tenacious, we are here,” Bass said.

The new duplexes were built to the highest modern standards of energy efficiency, and even include new prototype water heaters. The water heaters will be regularly monitored by their manufacturers in a type of test-run — a cost-saving arrangement beneficial to both the housing authority and the engineers.

The housing authority will soon be sending in an LEED certification application for the new housing units, Bass said, adding that she hopes for a high-quality LEED 2 score.

The exterior of the new buildings is very attractive as well, said LaFayette mayor Neal Florence, who noted that passersby coming through town will be impressed by the quality of public housing.

Indeed, the two new areas – both on Foster Circle and Culberson Avenue, do look good: the outsides are finished in different colors and textures, landscaping surrounds the gleaming new porches and community areas, including picnic tables and a large outdoor grill, await their first use by local families.

As of this time, all 30 of the new units have been spoken for, though applicants are welcome to inquire about a waiting list.

For more information on the new units, contact the LaFayette Housing Authority at 706-638-2733.