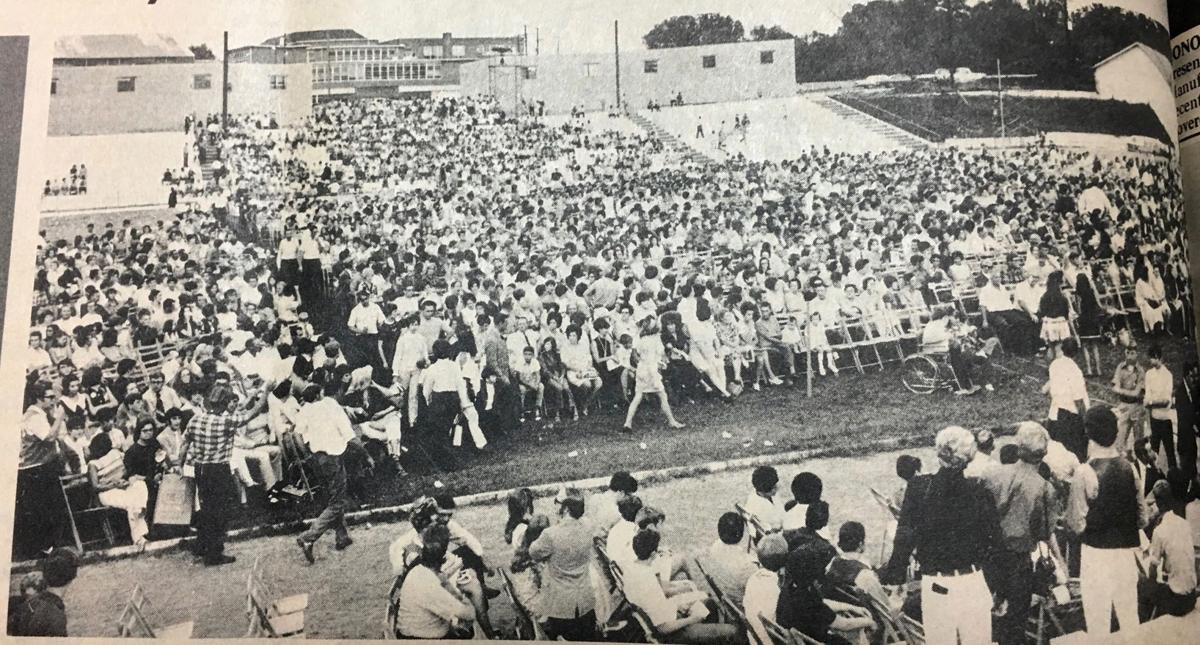 On Aug. 13, 1970, country music legend Johnny Cash performed at the old LaFayette High School football stadium in front of a crowd of more than 12,000. On Aug. 10, 2019, the city will pay tribute to the “Man in Black” with The Johnny Cash Tribute Show. 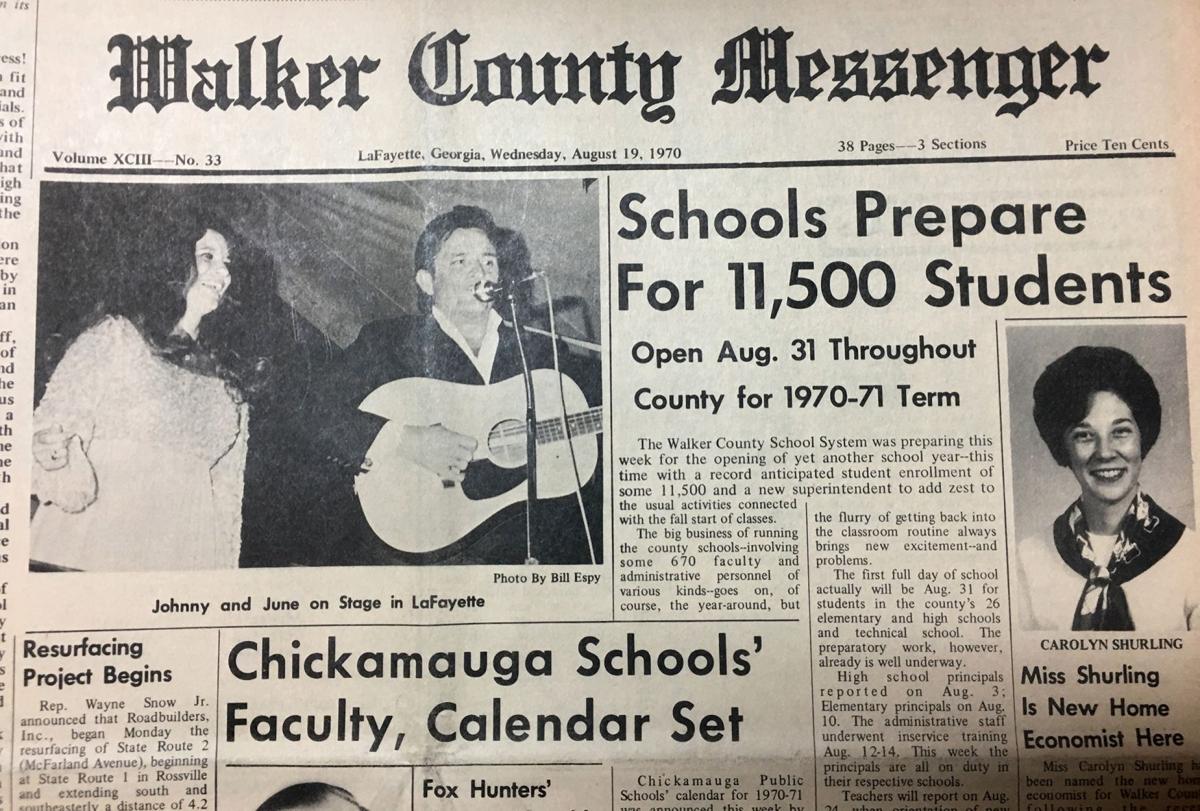 On Aug. 13, 1970, country music legend Johnny Cash performed at the old LaFayette High School football stadium in front of a crowd of more than 12,000. On Aug. 10, 2019, the city will pay tribute to the “Man in Black” with The Johnny Cash Tribute Show.

On Aug. 13, 1970, at the height of his popularity, country music mega-star Johnny Cash descended upon LaFayette, Ga., drawing a crowd that dwarfed the local population at the time.

The events that led Cash to play in this small community have become the subject of local lore. The concert itself raised nearly $500,000 in today’s value to pay off debt on LaFayette High School’s Patton Stadium.

This summer, the community gathers to pay tribute to the “Man in Black” at LaFayette’s Ross Abney Complex. It’s the same venue where Cash rocked an audience of more than 12,000 nearly half a century ago. Come relive local history and envision the future as “LaFayette, A Thriving Community” presents “The Johnny Cash Tribute Show” on Saturday, Aug. 10, from 6-9:30 p.m.

The concert headliner is Johnny Cash Now, an unbelievably authentic tribute to Johnny Cash and The Tennessee Three. Right down to Cash’s iconic introduction, “Hello, I’m Johnny Cash,” performer Gray Sartin and his band will make you believe you’re experiencing the real thing.

Local favorite, Dennis Brown and Friends, featuring Kenny Smith, will also entertain the crowd, playing a selection of Merle Haggard hits for a whole evening of great classic country music. Come hungry, and bring some cash, as there will be food trucks and vendors selling local arts that can’t be found anywhere else.

For tickets, which are just $6.94, go to https://www.eventbrite.com/e/lafayette-a-thriving-community-presents-johnny-cash-now-tickets-64988249604.

Or shop local and stop in at Medi-Thrift Pharmacy, Real Deals Home Store or The Bank of LaFayette to purchase paper tickets at a discounted rate of just $5.

For a preview of Johnny Cash Now, go to https://johnnycashnow.com.

Often referred to as the Old LaFayette High School football field or Patton Stadium, the venue is now known as the Ross Abney Complex. Cash, June Carter Cash and their band played the 1970 benefit there and raised $75,000 to pay off debt for the stadium’s construction.

A plaque honoring Cash’s contribution hung at the concession area for years. When the building was torn down in 2017, the plaque was placed in storage with the city of LaFayette.

Along with honoring Cash, the concert on Aug. 10 is intended to gauge community opinion on what the Ross Abney Complex could become. Can you imagine an amphitheater for concert series, art festivals, performance art and farmers markets? Something else?

Cash was called to play his legendary concert in LaFayette because of a life-changing encounter with then Walker County Sheriff Ralph Jones.

After crashing his Cadillac Eldorado into the woods, Cash was reportedly arrested by sheriff’s deputies the night of Nov. 2, 1967, when residents reported him banging on their doors.

Cash had been battling drug addiction for years and admitted to being at a low point in his life. He allegedly attempted to bribe arresting deputy Bobby Edward with a wad of $100 bills and was booked on drug charges as well as charges of prowling and public intoxication.

The next morning, Sheriff Jones, a fan of the “Man in Black,” confronted Cash in his jail cell. After a heart-to-heart talk, Jones dropped the charges with a stern warning. He reportedly told Cash, “Do with your life whatever you want to. Just remember, you’ve got the free will to kill yourself or save your life.”

Cash said his arrest in LaFayette was a turning point in his life as well as in his marriage to the late June Carter Cash. Although his battle with addiction continued, Cash credited Jones for helping him “fight his demons.”

Johnny Cash died on Sept. 12, 2003, of complications from diabetes. He died just four months after the death of his beloved June Carter Cash and left a tremendous body of work that has influenced nearly every facet of popular music.

In February 2019, LaFayette was one of three cities accepted into Thrive Regional Partnership’s 2019 Thriving Communities program. Thriving Communities is a creative place-making program of Thrive Regional Partnership designed to leverage local arts and culture assets for economic vibrancy and growth throughout the greater Chattanooga region. The program is funded by the Lyndhurst Foundation, with design thinking facilitation provided by Bridge Innovate. To learn more, visit www.ThriveRegionalPartnership.org/Thriving-Communities.

LaFayette’s Thriving Community’s team has hosted several events and surveys over the past six months including a Community Inspiration Scan, From Marsh to Mars, and What could “bee”? Residents were able to give their view of what they consider valuable and cultural aspects already in the community and what they would like to see in the future.

LaFayette’s team has been taking back that feedback and developing strategic approaches to leverage their artistic and cultural assets in order to spark economic vibrancy and growth from within their communities. At the end of the program, each team is eligible to apply for a seed grant from the Lyndhurst Foundation to make their community strategy a reality.

Given the success of the annual Honeybee Festival and the community support for honoring Cash’s contribution to the city, LaFayette will relive history with the Johnny Cash Now performance on Aug. 10.

Tickets: $6.94. Go to community-presents-johnny-cash-now-tickets-64988249604?fbclid=IwAR3RjlywxFXf7PSA-gfxF97z-Me27hjHhug9Utad-ObNaKAPZpB36ROL_Wc.) Or shop local and stop in at Medi-Thrift Pharmacy, Real Deals Home Store or The Bank of LaFayette to purchase paper tickets at a discounted rate of $5.