Ringgold High School’s Performing Arts Department was recognized with a special proclamation by the Ringgold City Council on Dec. 9 after Troupe 8715 garnered regional and state first-place awards for its one-act musical “Bright Star.” 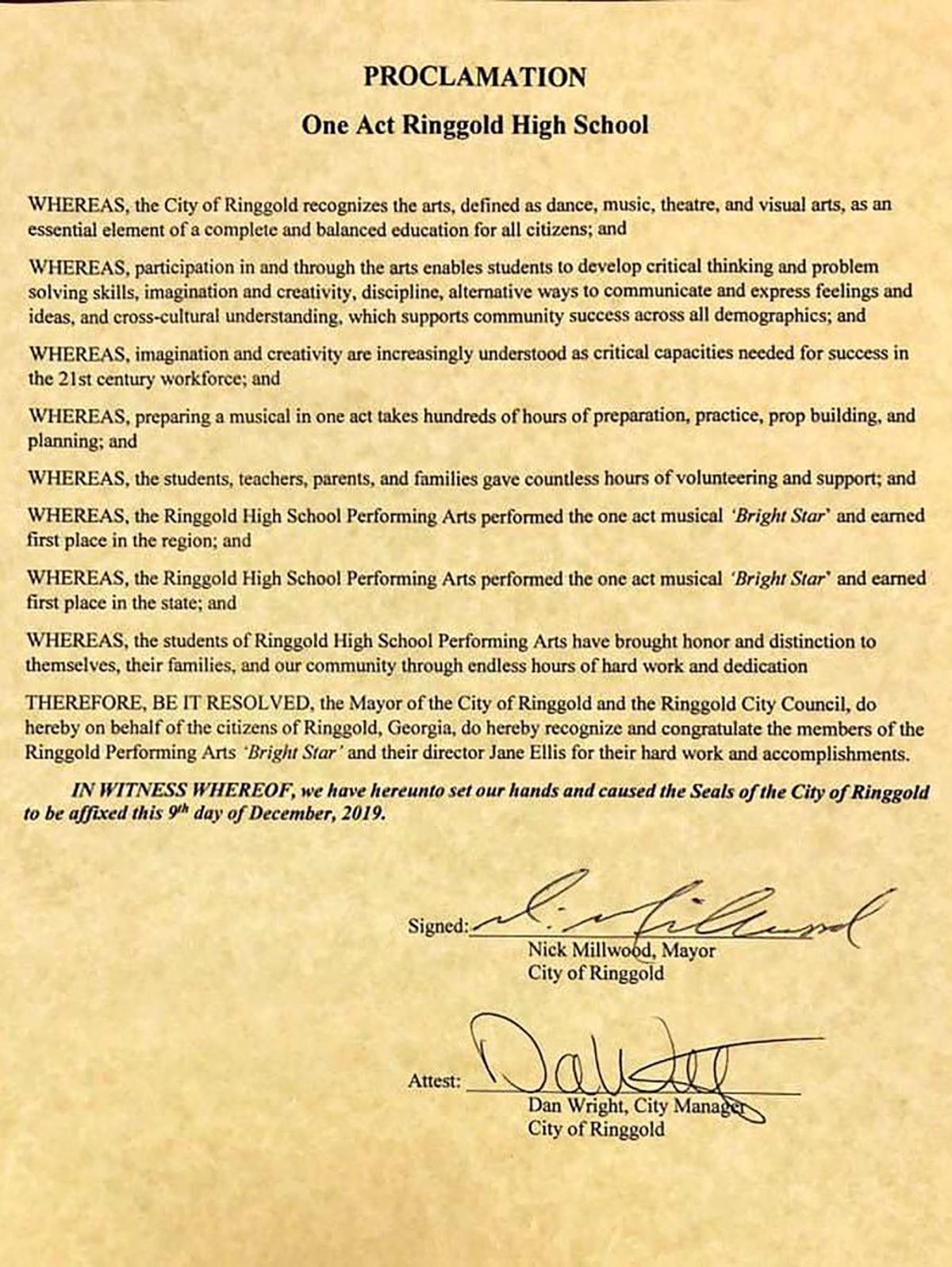 Ringgold High School’s Performing Arts Department was recognized with a special proclamation by the Ringgold City Council on Dec. 9 after Troupe 8715 garnered regional and state first-place awards for its one-act musical “Bright Star.”

Ringgold High School’s Performing Arts Department has been on a roll lately, and its success has not gone unnoticed.

Ringgold’s mayor and City Council took the time to recognize the school’s thespians during the final meeting of the year on Dec. 9 by issuing a proclamation celebrating the troupe’s recent first-place finishes with its one-act musical at the regional and state levels.

“It’s phenomenal what you guys do,” council member Kelly Bomar said. “You’ve won region and won state, which is a huge accomplishment. A lot of people don’t know about the tens, hundreds, and thousands of hours that go into preparing, practicing — the prep work you have to do to make sure that all your stuff is right to be able to perform at this level.”

The troupe’s one-act musical, “Bright Star,” is an Appalachian period piece set in the 1920s and 1940s, which delighted audiences this fall with its look at relationships, loss, and healing.

Bomar, a music teacher and avid supporter of the arts, read a portion of the proclamation and thanked the troupe for the great recognition it has brought to the school and the community.

“We thank you very much for making Ringgold look good for what you do,” Bomar said. “Therefore it be resolved, the mayor of the city of Ringgold and Ringgold City Council do hereby, on behalf of the citizens of Ringgold, Georgia, recognize and congratulate the members of Ringgold Performing Arts “Bright Star” and their Director Jane Ellis for their hard work and accomplishments. So, from us to you, we offer a huge thank you and keep doing what you’re doing.”

After cashing in on QB gambles, Niners, Chiefs in Super Bowl