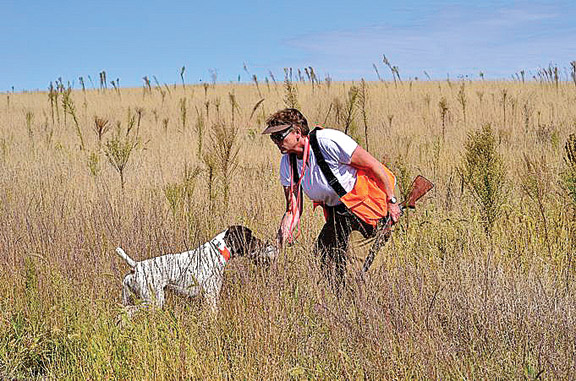 Sam returns a bird to a waiting Brenda Roe during a field trial. 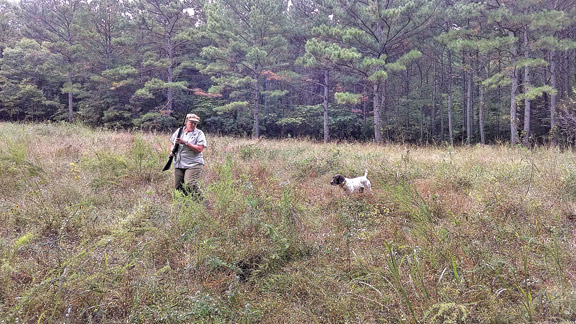 Brenda Roe takes Gamble’s Sam Man through his paces in her training field. Unfazed by the rifle at the ready, Sam points out a quail hidden in the bush. (Messenger photo/Christi McEntyre) 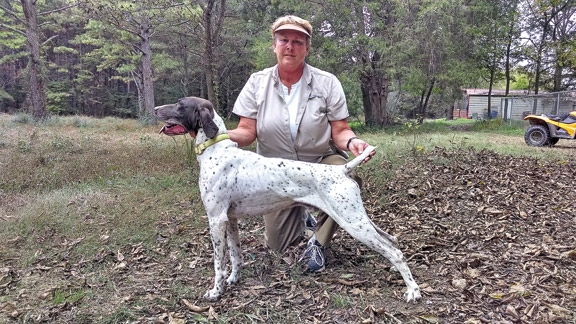 Sam returns a bird to a waiting Brenda Roe during a field trial.

Brenda Roe takes Gamble’s Sam Man through his paces in her training field. Unfazed by the rifle at the ready, Sam points out a quail hidden in the bush. (Messenger photo/Christi McEntyre)

Walnut Hill Kennels, run by Brenda Roe and Rick Hopkins, has been training bird dogs since opening its doors in 1995, though their love of dogs began many years before.

“We train dogs for the public and our own dogs,” Roe said. “We train mostly pointing dogs for hunting and field trials and hunt tests.”

Indeed, clients send their dogs to Walker County for training from as far away as Texas, Colorado and Iowa. While Roe and Hopkins are happy to train any kind of upland bird dog (i.e. quail hunting dogs), their true love has always belonged to the German shorthaired pointer breed.

Now, Walnut Hill Kennels has produced a dog that, at the tender age of five, has accomplished what only one other German shorthaired pointer has done.

Gamble’s Sam Man, known affectionately as Sam, is the result of a cross between Rick Hopkins’s own champion dog, Gamble’s Odyssey Fritz, and a female dog owned by Sonny Hawkins.

“He is by our sire, but he was bred by Sonny Hawkins, who is a local guy,” Roe said. “He was bred here locally and raised by me and trained by me.”

Fritz was himself a multiple title winner in his day.

“Sam’s sire got many titles, and now Sam has even done the same, if not more, than Fritz did,” Roe said. “What Sam has done, there’s only one other dog that has accomplished the same titles that he has, and that is a show champion, field champion and versatile champion.”

Not only is Sam a “dual champion” in both AKC show and field trials – which is in itself difficult enough to accomplish, Roe explained – he has also passed the incredibly difficult versatile test put forth by NAVHDA, the North American Versatile Hunting Dog Association.

Show champion is probably the title most people are familiar with, as the show competition pits dogs against their own breed standards, similar to the oft-televised dog shows. The other two categories, however, are more a test of the dog’s ability than its breeding.

“Field champion is just that they have to compete in AKC (American Kennel Club),” Roe explained. “It’s a competition. They have to run and point birds, stand steady and beat so many other dogs to win. They have to win to get points. And he did that quite early, at the age of two.”

To win his third crown, however, took a lot more time and training for Sam.

“The versatile stuff is a lot more extensive,” Roe said. “That involves field work, tracking and water work, as in water retrieving ducks. They have to qualify with a NAVHDA utility title in order to even go to the invitational for the versatile title.”

Roe emphasizes the difficulty of the versatile tests.

“It’s an hour in the field, steady to wing and shot level, three parts of water work, 100-yard blind duck retrieve, a double mark retrieve, and all this is steady on the banks through shots,” she said.

Sam achieved his versatile title at the age of five this past summer. He has since turned six, and is still considered very young and into his prime in the hunting test arena.

Sam has become the second German shorthaired pointer in history to hold the triple crown distinction of being both an AKC show and field “dual champion” and a NAVHDA versatile champion.

“And then last spring, on top of all this, he placed in the AKC walking national gun dog trial,” Roe said. “Out of 59 dogs, he placed second runner-up.”

“He’s the only dog in history to have done that on top of these titles,” she said. “He is the only one that’s ever placed in national trials and gotten dual and versatile championships…On top of all that, he’s also a master hunter, which is passing six levels in the field of steady to wing and shot. That’s AKC. So he’s a combination of AKC titles and versatile NAVHDA titles.”

Naturally, his many awards have garnered him a bit of fame in the bird dog community, and Sam is now a hot commodity.

“He’s already been bred quite a bit,” Roe said. “He’s throwing really nice puppies that are showing a lot of promise.”

Just like dogs, most breeders and trainers don’t focus on both aspects of their pointers, but Roe thinks that keeping the German shorthair’s original all-around versatility alive is important to maintaining the breed.

“The versatility part of German shorthairs would be going into the water work,” she said. “That’s what they’re bred to do, they’re bred mostly for pointing and upland hunting, but they’re also bred to be an all-around versatile hunting dog. And not everybody pursues that part of them. I think it’s an important thing to do in a breeding program to keep those qualities into the breed, so that’s why I like to do it. I don’t do a lot of the water work with other people’s dogs, just the field work. It’s just something that I pursued with my own dogs, just to keep it into the breed.”

Roe and Hopkins are open to taking in and training dogs from anywhere in the country, provided that the type of training desired meets their focus.

And they don’t just focus on training ribbon-winning champions, either. They are equally as adept at teaching a dog to be a reliable and effective hunting companion.

“We train anywhere from the average hunting dog to testing and trialing dogs,” she said.

Although German shorthaired pointers and other bird hunting dogs can occasionally make good pets, Roe warns against trying to turn a dog bred for hard work into a companion animal, and advises all potential pet owners to research breeds and their individual needs thoroughly.

For those that want a working dog, however, Walnut Hill Kennels can certainly help with that.

“Sometimes these bird dogs, they just need a job,” Roe said. “We give them a job to do.”

For more information or to inquire about training, contact Brenda Roe or Rick Hopkins at Walnut Hill Kennels at 706-764-2417 or visit walnuthillgsps.us