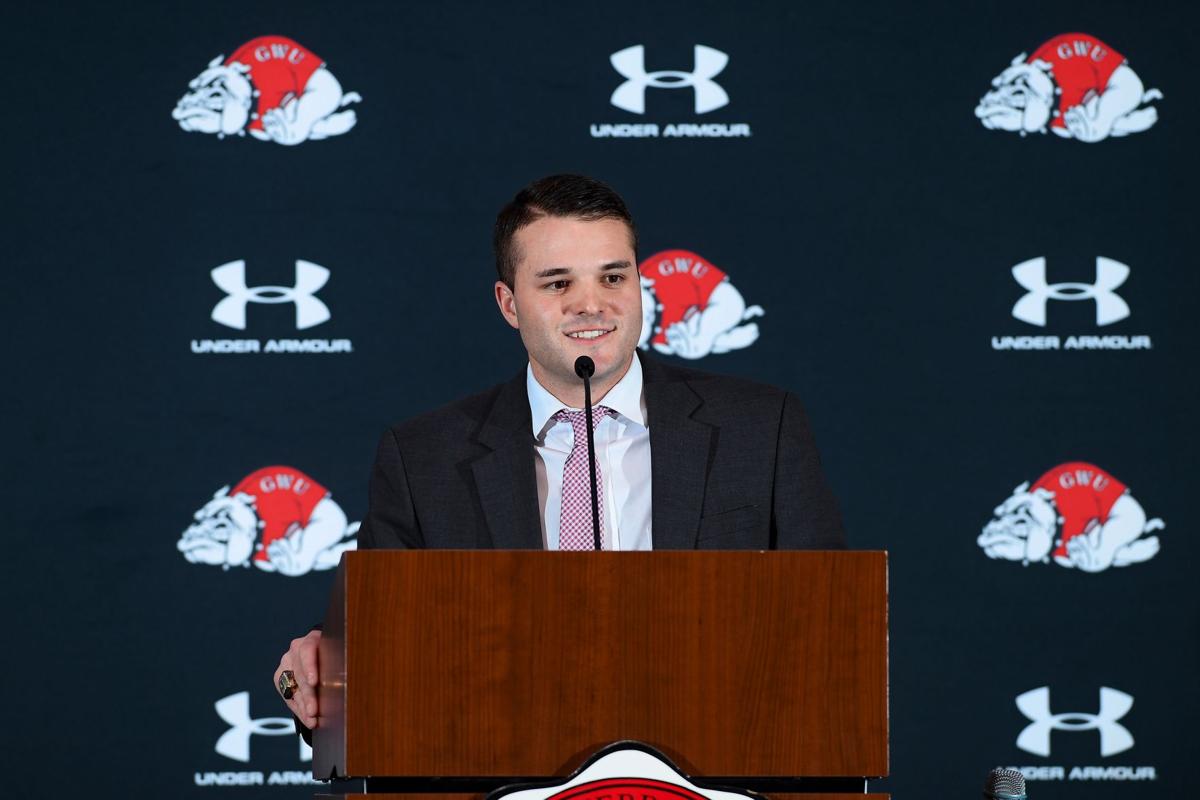 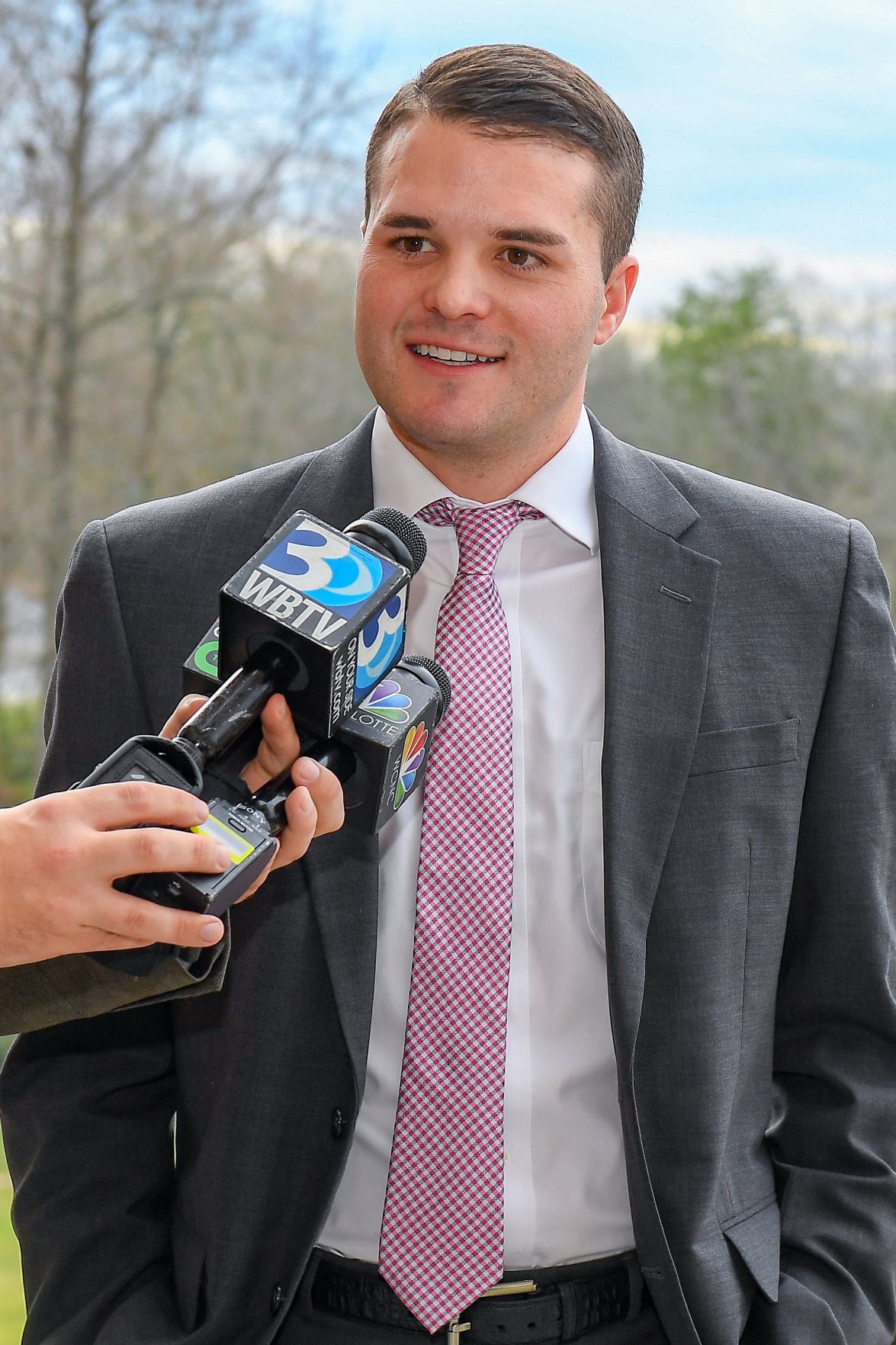 “This place is unbelievable,” Gardner-Webb head coach Tre Lamb said. “I have been welcomed with open arms and I am so thankful for that. I’m so honored to be your football coach and I’m so humble to be here.”

According to Vice President of Athletics Chuck Burch, there were about 300 applicants for the head coaching vacancy.

The 30-year-old newly-christened head coach joins Gardner-Webb after most recently serving as the offensive coordinator at Tennessee Tech.

Tre Lamb thanked the Gardner-Webb University staff and search committee and included a message to the faculty.

Tre Lamb thanked many during his press conference, including his father, Hal Lamb. Tre played varsity football for his father at Calhoun High School. During his time as a Yellow Jacket, Tre compiled a record of 21-4.

“Probably the biggest influence in my life,” Tre Lamb said on his father. “I love you and thank you for everything you’ve done for me.”

Tre Lamb’s first job out of college took him to Macon to serve on his uncle, Bobby Lamb’s, coaching staff at Mercer.

“I was just a young hot shot out of college,” Tre Lamb said. “I thought I knew everything and he humbled me a little bit. I learned a ton from him and he will be a mentor for the rest of my life and someone I lean on.”

Tre Lamb said its going to take a village to raise a child, that child being Gardner-Webb Football.

“We need the entire Gardner-Webb family to be successful,” Tre Lamb said. “It’s going to be a group effort. Me and my staff, ... we’re going to put our best foot forward and we’re going to give us every chance in the world to win every game.”

Tre Lamb said he will strive to bring a winning culture and a family atmosphere to Gardner-Webb.

Tre Lamb said Gardner-Webb Football is going to be creative, innovative and fun to watch, but added a core fundamental to the foundation.

“I’m not scared to try anything new, — no question about it,” Tre Lamb said. “But our guys, our coaches have to be held accountable and there’s got to be some accountability and discipline in our program.”

Tre Lamb said Gardner-Webb is not a “football factory.” Rather, education comes first and foremost.

“This is not Alabama, this is not Clemson,” Tre Lamb said. “This is a place of higher education and education is going to come first in my program. These players are going to go to class (and) they’re going to be better when they leave here.”

“They unpack their car at 18 years old, if they haven’t changed any by the time they’re 22, we’ve failed them,” Tre Lamb said. “If all we do is win five Big South Championships and 100 games, that has no eternal influence in this world.”

Tre Lamb concluded by saying his players will be loved and his staff will bring their all to Runnin’ Bulldogs Football.

Downs said he had three core ideals for a football coach. First priority was someone who could infuse the community, inclusive of the football program and the university as a whole, with confidence.

“If you’re mascot is the Bulldog, you better have some swagger, so we’re looking for confidence and swagger,” Downs said.

Second, Downs said he sought a candidate who could bring both discipline and fun to the Runnin’ Bulldog program.

And third, most importantly as Downs said, he wanted a coach who could outwork anyone. Downs was after a hungry coach, who looked forward to working every day for the betterment of the program.

“Ladies and gentlemen, on all three of those counts, we have found our man,” Downs said. “Coach Tre Lamb is going to bring confidence back to Gardner-Webb, back to Boiling Springs. He’s going to energize not just our players, but our entire student body, our alumni and our fans across North and South Carolina.”

According to a press release from Gardner-Webb University, Georgia Football Head Coach Kirby Smart, “Tre is a rising star in college football. He knows football and he knows how to create a culture of winning.”

Gardner-Webb University is a private, Baptist school based in Boiling Springs, North Carolina. The Runnin’ Bulldogs compete in the Big South Conference of NCAA Division I FCS.

“Tre Lamb’s football IQ is through the roof,” Downs said. “He’s ready to go and, in his own words, he’s got ‘the juice.’”