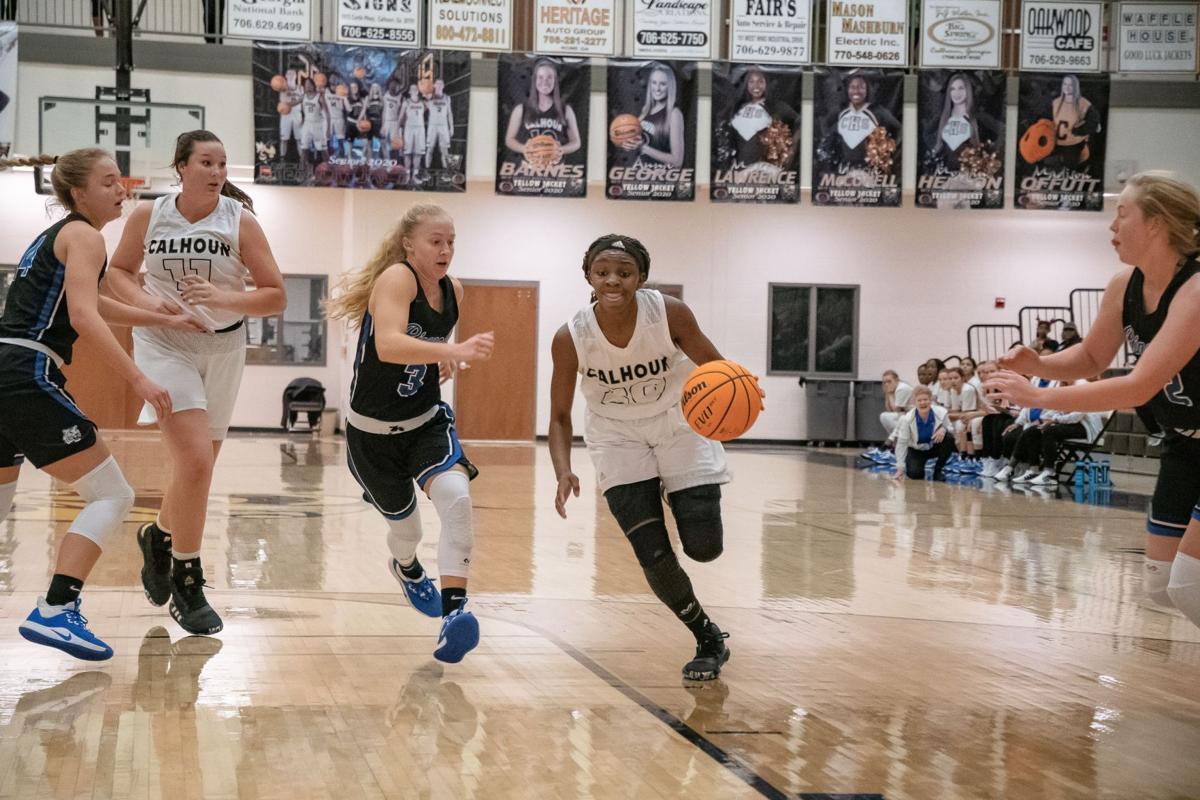 Calhoun freshman Britiya Curtis dribbles to the net during the Lady Jackets’ game against the Ringgold Lady Tigers at Calhoun High School on Tuesday, Dec. 10. 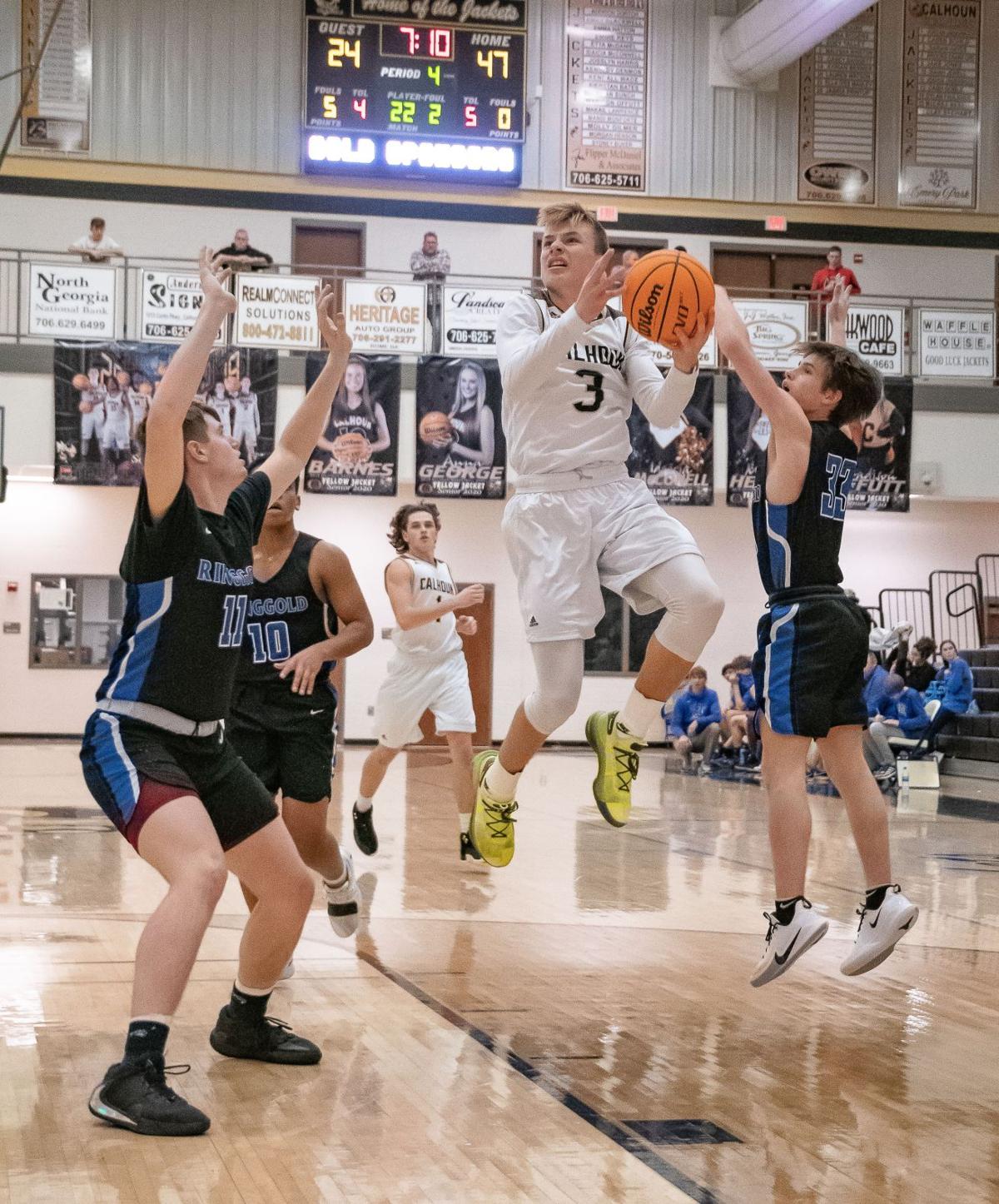 Calhoun sophomore Peyton Law battles for a basket during the Yellow Jackets’ game against the Ringgold Tigers at Calhoun High School on Tuesday, Dec. 10. 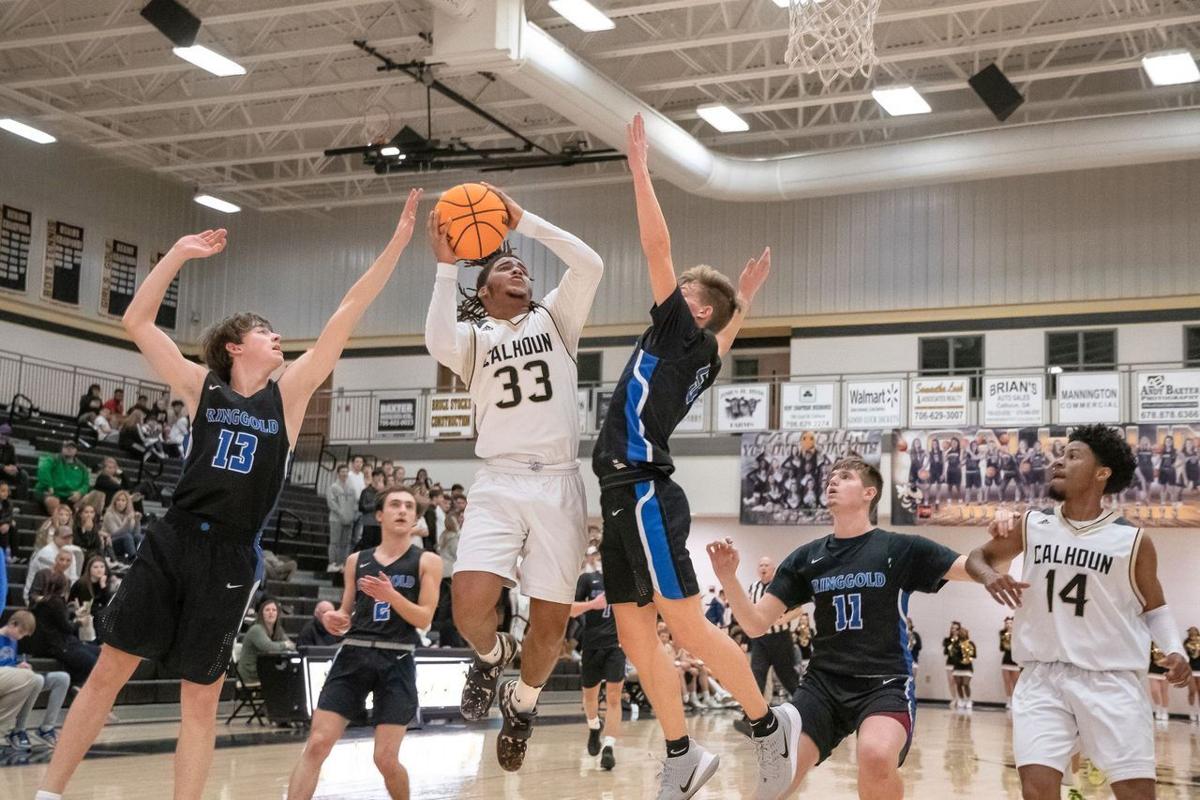 Calhoun senior Tonocito Martha goes up for the shot during the Yellow Jackets’ game against the Ringgold Tigers at Calhoun High School on Tuesday, Dec. 10.

Calhoun freshman Britiya Curtis dribbles to the net during the Lady Jackets’ game against the Ringgold Lady Tigers at Calhoun High School on Tuesday, Dec. 10.

Calhoun sophomore Peyton Law battles for a basket during the Yellow Jackets’ game against the Ringgold Tigers at Calhoun High School on Tuesday, Dec. 10.

Calhoun senior Tonocito Martha goes up for the shot during the Yellow Jackets’ game against the Ringgold Tigers at Calhoun High School on Tuesday, Dec. 10.

Curtis leads Calhoun back to .500

“We played hard Friday against Murray (County) and won, but there were a lot of defensive mistakes, so we tried to clean that up between then and now,” Lady Jackets head coach Jaime Echols said. “We still had to make some defensive adjustments at halftime on the way we defended a couple of things, but I think our kids just came out very scrappy, very hard and got them one tonight.”

“She’s so quick and that helps her on the defensive end and she can jump out of the gym which helps her get those rebounds,” Echols said. “Offensively, she can create her shot and she can take it off the dribble or whatever she needs to do. She’s very good about giving the ball up when she needs to, but I just feel like any possession she can take and score.”

As mentioned earlier, Calhoun trailed Ringgold 27-19 in the latter half of the second quarter, but the Lady Jackets closed on an 8-0 run, heading to the locker room tied 27-27.

“I just had the feeling the whole time ... it was taking all we had just to hang close,” Echols said. “When we got into the half, we had to make a couple adjustments on the way we guarded screens.”

Echols said his team’s competitive edge stood out the most over the 32 minutes of action.

“They competed hard and they are learning the level of which they need to compete and believe that they can win,” Echols said. “It’s one thing to hope you can win, it’s another thing to expect you can win and I think we’re somewhere in between right now.”

Taming of the Tigers

The Yellow Jackets (4-1, 2-1 Region 6-AAA) quickly got the taste of defeat out of their mouths, cruising to a 39-point victory over Ringgold and picking up their first home win of 2019.

I think they came out and played the way I wanted them to play on defense,” Yellow Jackets head coach Vince Layson said. “It had a good snowball effect as far as offensively and things like that. Any kind of momentum is good.”

Calhoun quickly asserted itself on the home hardwood, jumping out to a 17-6 lead after one quarter and never looking back.

“We came out and did a little run-and-jump on defense,” Layson said. “Tuesday night game, not a lot of energy in the building, we need to create some energy for ourselves. I thought that set the tone from the very beginning ... it just got us in the flow.”

Calhoun senior Gage Maffetone paced the Jackets with 17 points in three quarters of action. Fellow senior Caleb Boone was second on the squad is scoring with 10.

“He just does what Gage does,” Layson said on Maffetone. “He leads us every night, not just scoring-wise, but verbally.”

In the later stages of the game, Layson was able to give many players on his bench some valuable varsity experience. In turn, several made contributions on the stat sheet.

Christian Lewis chipped in with eight points, all in the fourth quarter. Walt McKenzie registered four points and pulled down five rebounds. Blaze Hammett hit three field goals in the final eight minutes against the Tigers.

“One of the things we talked about in our film session the other day was sharing the ball and making the extra pass and playing for the guy beside us,” Layson said. “I thought all 14 guys did that tonight.”

The girls’ game will tipoff at 7 p.m. at Rome High School, immediately followed by the boys’ contest. Adairsville-Calhoun will commence at 6 p.m. at Calhoun High School.