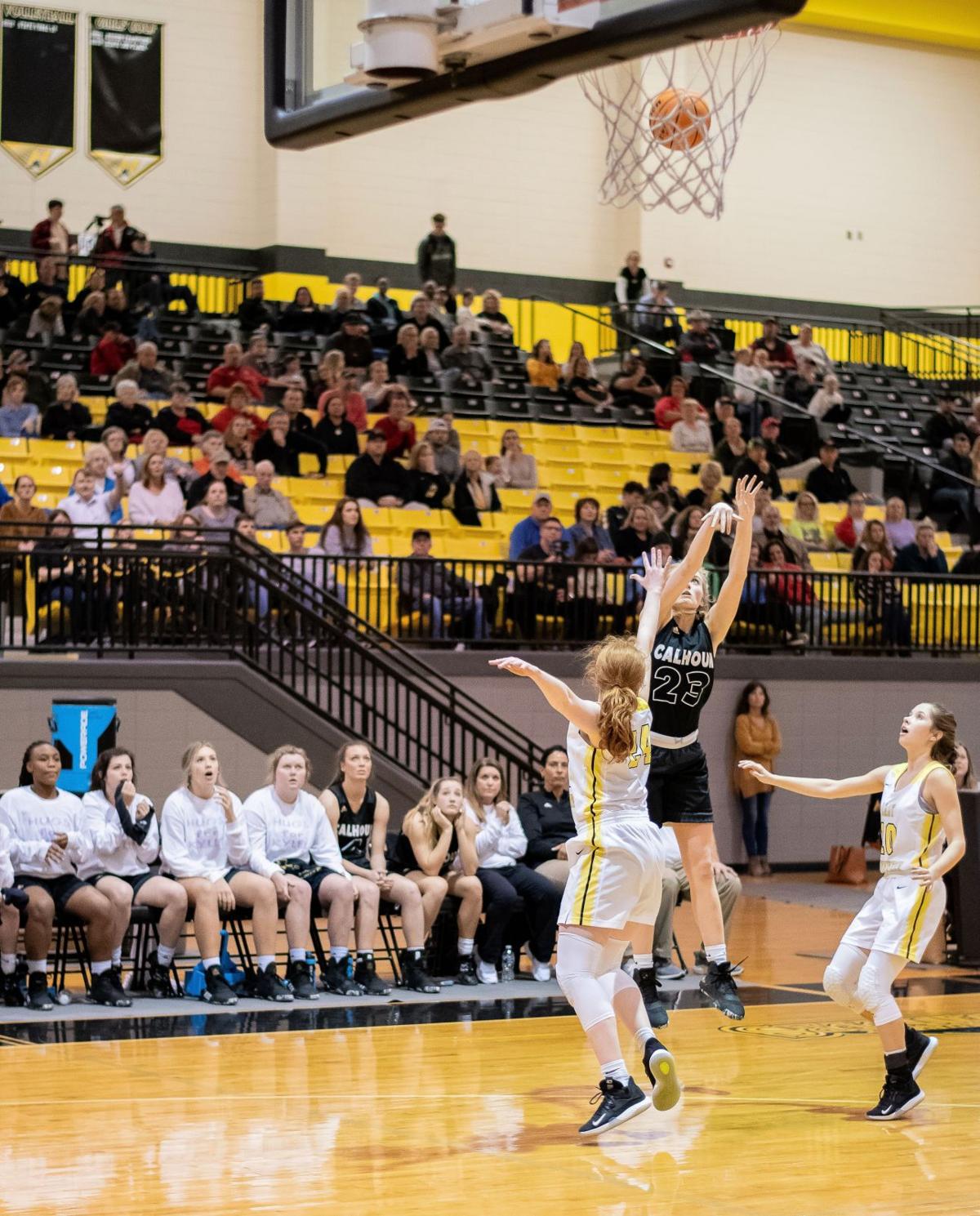 Calhoun senior Anna George hits a last-second three pointer at the end of regulation to tie the game 41-41 at Mountaineer Arena on Thursday, Feb. 6. The Lady Jackets would defeat the North Murray Lady Mountaineers in the Region 6-AAA quarterfinal in double overtime 53-48. 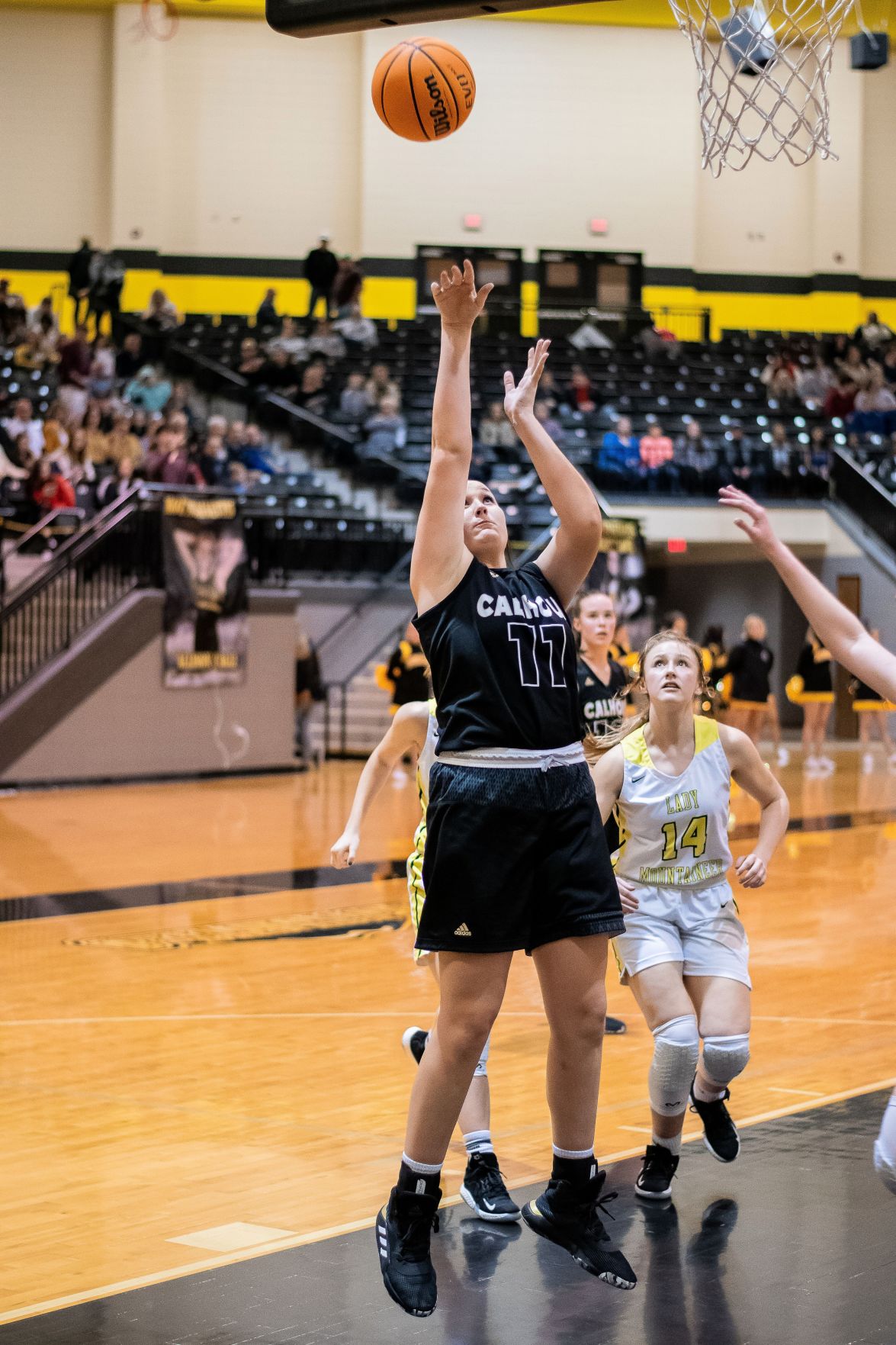 Calhoun junior Lyndi Rae Davis goes for a layup during a region quarterfinal game against the North Murray Lady Mountaineers on Thursday, Feb. 6, at Mountaineer Arena. 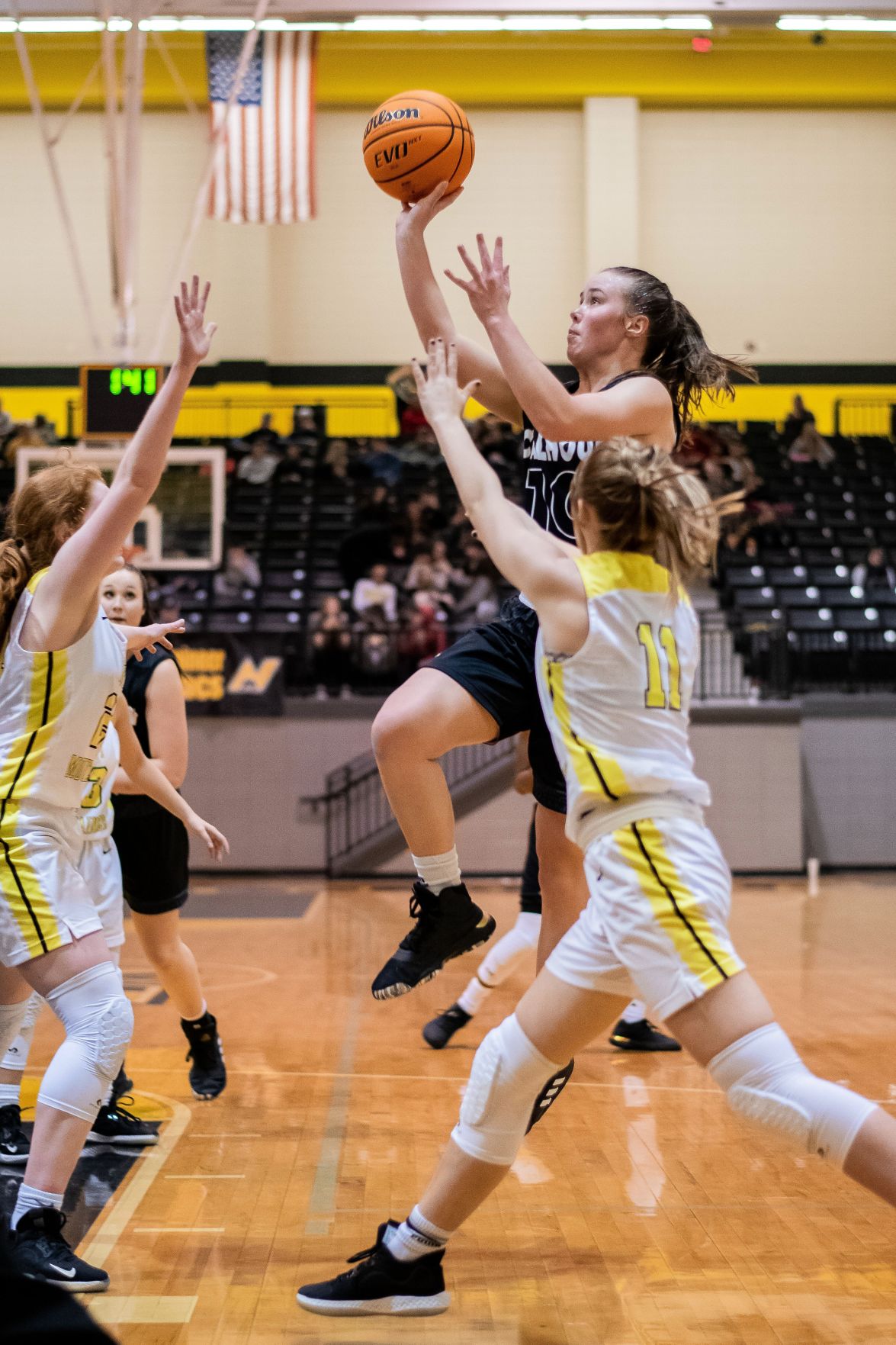 Calhoun senior Anna George hits a last-second three pointer at the end of regulation to tie the game 41-41 at Mountaineer Arena on Thursday, Feb. 6. The Lady Jackets would defeat the North Murray Lady Mountaineers in the Region 6-AAA quarterfinal in double overtime 53-48.

Calhoun junior Lyndi Rae Davis goes for a layup during a region quarterfinal game against the North Murray Lady Mountaineers on Thursday, Feb. 6, at Mountaineer Arena.

The basketball found its way to Anna George as Calhoun's season came down to one final shot trailing North Murray by three.

Miss the three-point shot and the season would be over, along with George and fellow senior Erin Barnes' varsity careers. Make the shot, tie the game at the buzzer and extend the season for at least four minutes.

George put a prayer with everything in the balance and the ball found nothing but net. Game tied 41-41 after regulation.

That buzzer beater was just three of George's 26 points as the Calhoun Lady Jackets outlasted the North Murray Lady Mountaineers 53-48 in the Region 6-AAA quarterfinals Thursday at Mountaineer Arena. The victory sent Calhoun into a frenzy, as the Lady Jackets had not only clinched a spot in the semifinal against Ringgold, but also a state playoff berth.

“I told them I have never been more proud of a group of athletes,” Lady Jackets head coach Jaime Echols said. “They worked so hard (and) new coaching staff, they bought into everything that we’ve done. That was a great moment to see them crying because they were so excited.”

For George, it was now or never time when she elected to put up the attempt.

“I was just setting up, and honestly, I just threw it up there and it went in,” George said on her game-tying basket. “I can barely breathe right now. I’m just so ecstatic.”

Echols had high praise for his senior, who scored seven of the Lady Jackets’ 12 points in the two four-minute extra sessions.

“She stepped up big,” Echols said. “I don’t think she was really happy with the way she played here last time. For her to come back and have the game to put us into the state tournament … I’m so proud of her.”

The teams combined for just six points in the first overtime, as George recorded a basket plus one while North Murray’s Korbin Tipton hit just her third shot of the game. She would be held to just 13 points, a far cry from her 35 against the Lady Jackets back on Jan. 25.

“She’s a special player,” Echols said of Tipton. “We thought if we could limit her scoring, we’d have a chance to win. Anna George guarded her most of the night, so she had a great night defensively and hit the shot.”

“I think they’ve enjoyed themselves this year and I think they desperately wanted to keep playing just so they could continue being around each other,” Echols said of his team. “We talk to them at practice that this team will never, ever be together again … so let’s make the most of it and let’s keep it going as long as we can.”

It's weird to think had that three pointer not been made, the whole narrative of this story would be completely different. The last shot of the season would have also been George’s final of her varsity career. But, as fate would have it, the money-time three spark the double OT win, lifting Calhoun past North Murray for the first time since Dec. 12, 2017.

“I would like to tell you that we drew that play up for Anna, knowing that they didn’t think she would shoot the three, but we tried to draw up something to get Tabby (Britiya Curtis’ nickname) off a double screen,” Echols said. “In situations like that, it gets chaotic, it gets desperate and our senior who hadn’t shot a three pointer all year threw one up and it went in. It allowed us to keep playing and extend our season a little bit.”

Echols said he's been coaching basketball for 26 years, and though this is his first season at Calhoun High School, the Lady Jackets' comeback W will rank high on his all-time moments list.

“I don’t know many folks around gave us much of a chance to be in the state playoffs when this season started," Echols said. “These kids believe. I don’t know where it ranks, but I tell you one thing, it ranks really high. It’ll have to be a very special team to rank ahead of this bunch.”

After the game, George said she and her teammates were determined not to have their season come to an abrupt end.