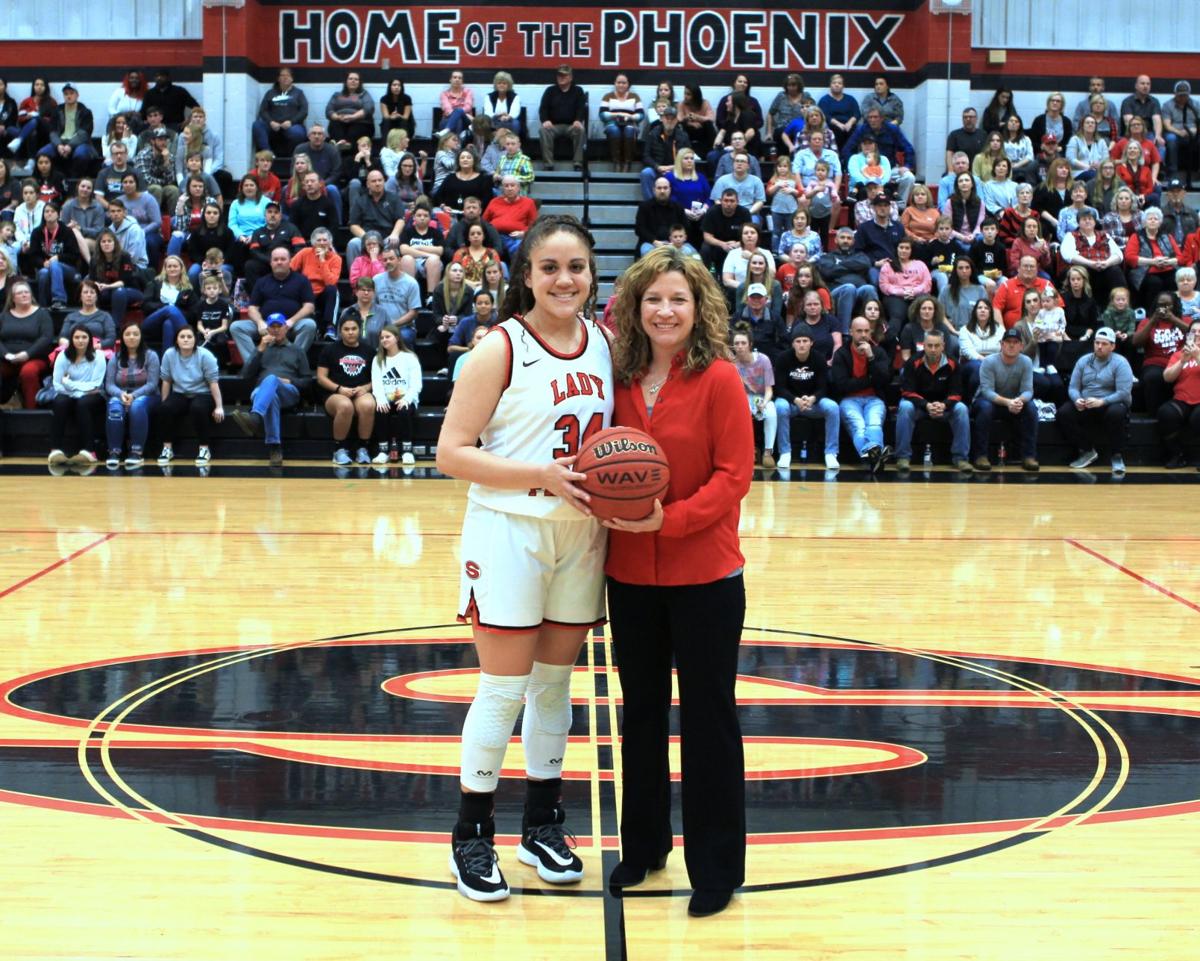 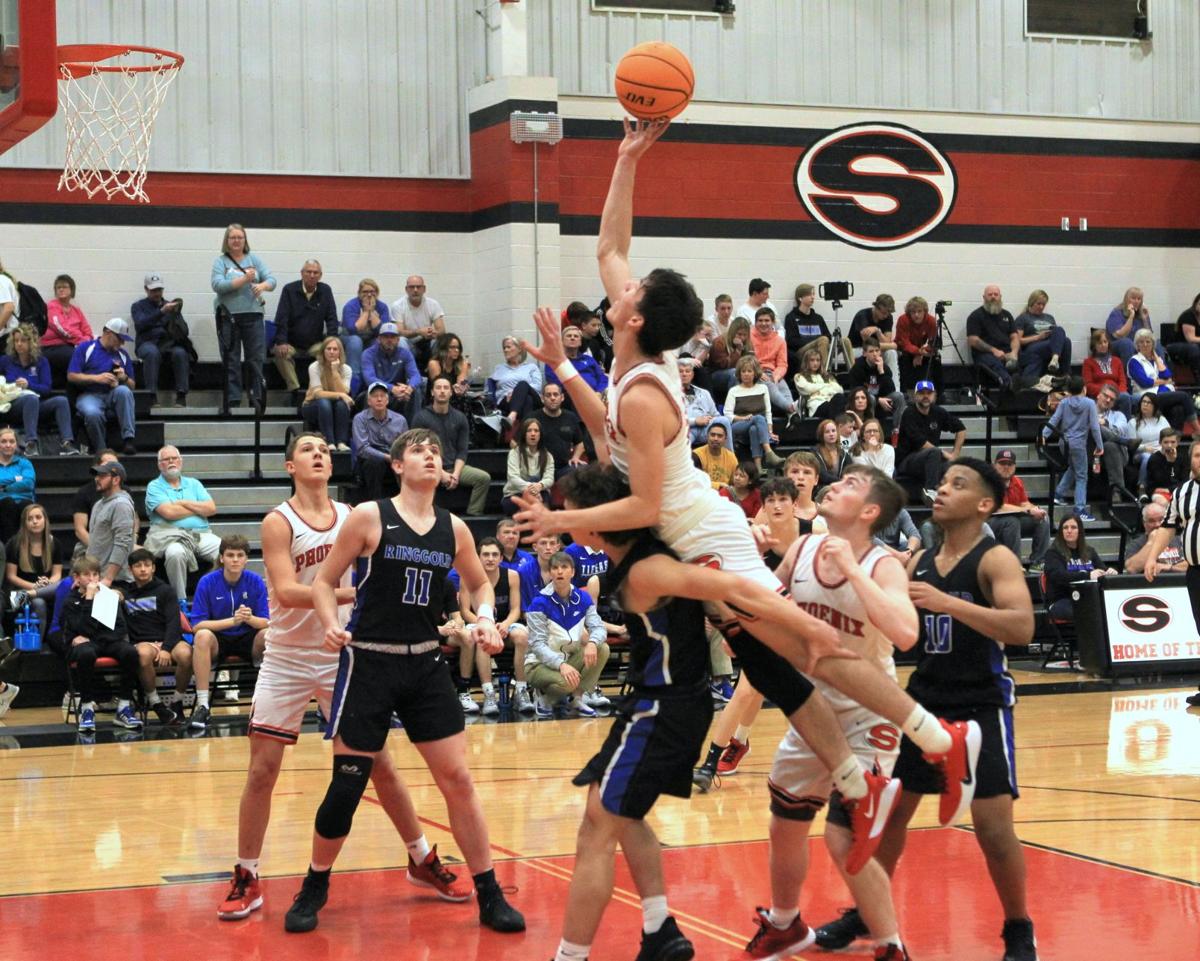 Sonoraville senior John Lister goes for the basket during the Phoenix’s game against the Ringgold Tigers at Sonoraville High School on Friday, Jan. 10. 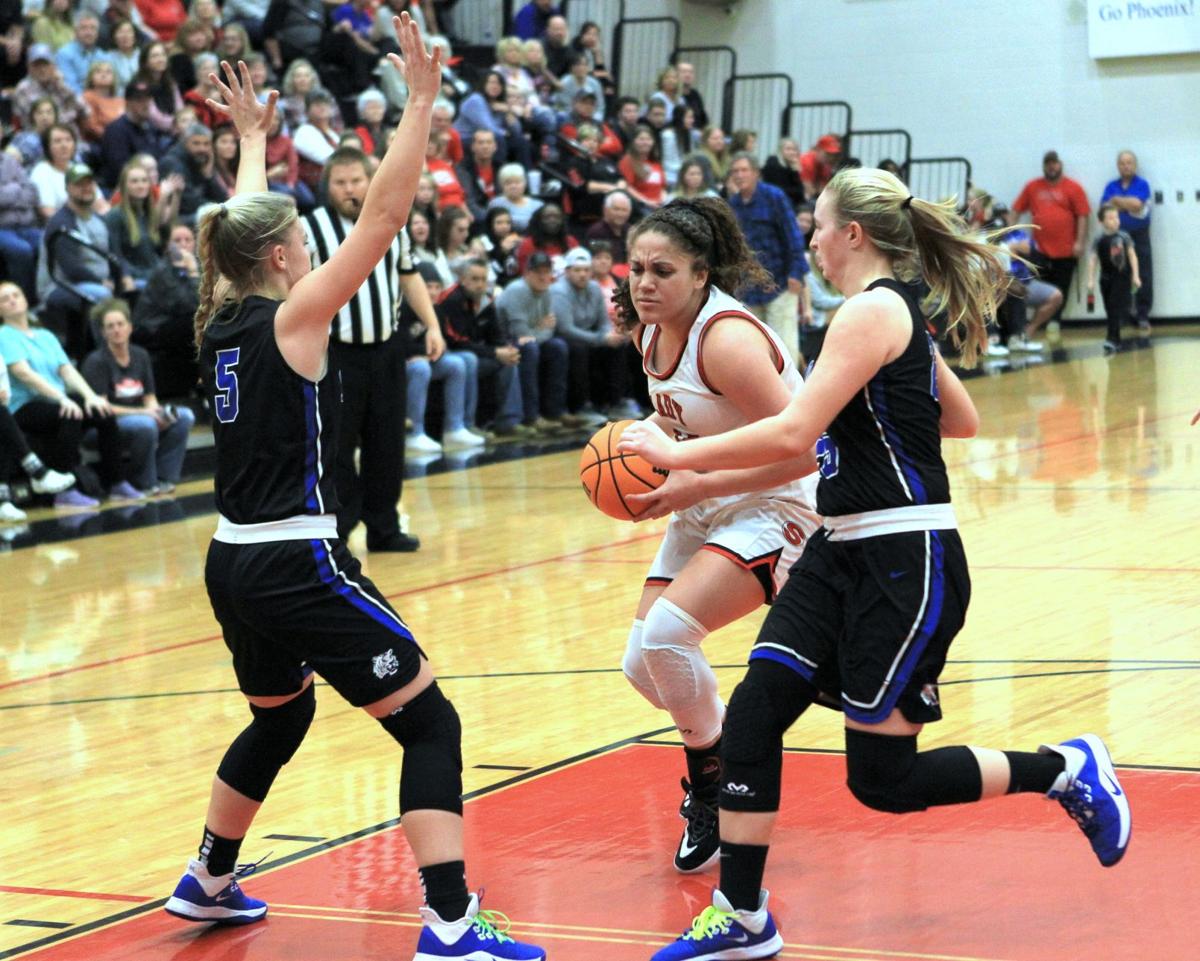 Sonoraville senior Maliyah Parks battles inside the paint during the Lady Phoenix’s game against the Ringgold Lady Tigers at Sonoraville High School on Friday, Jan. 10. 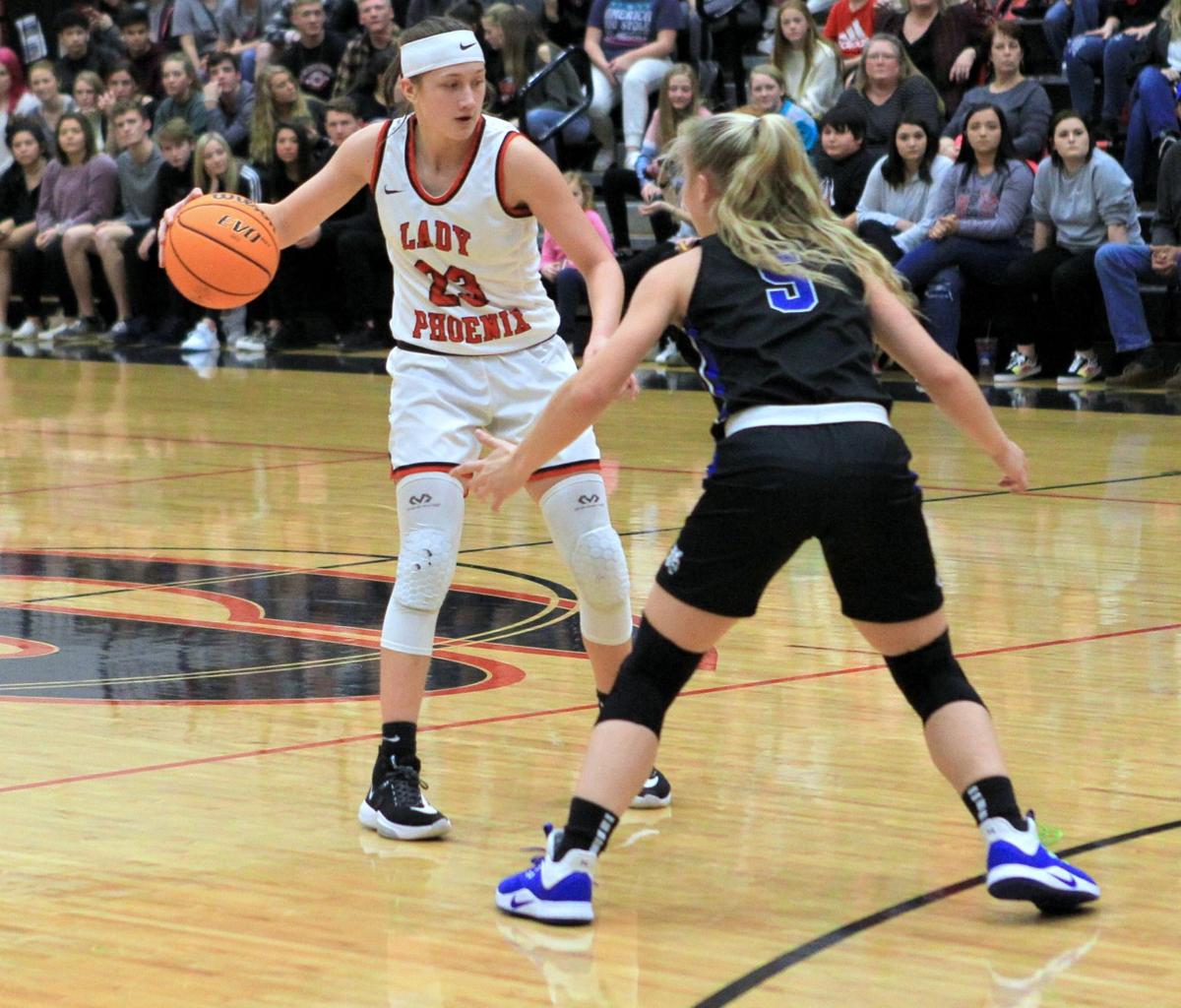 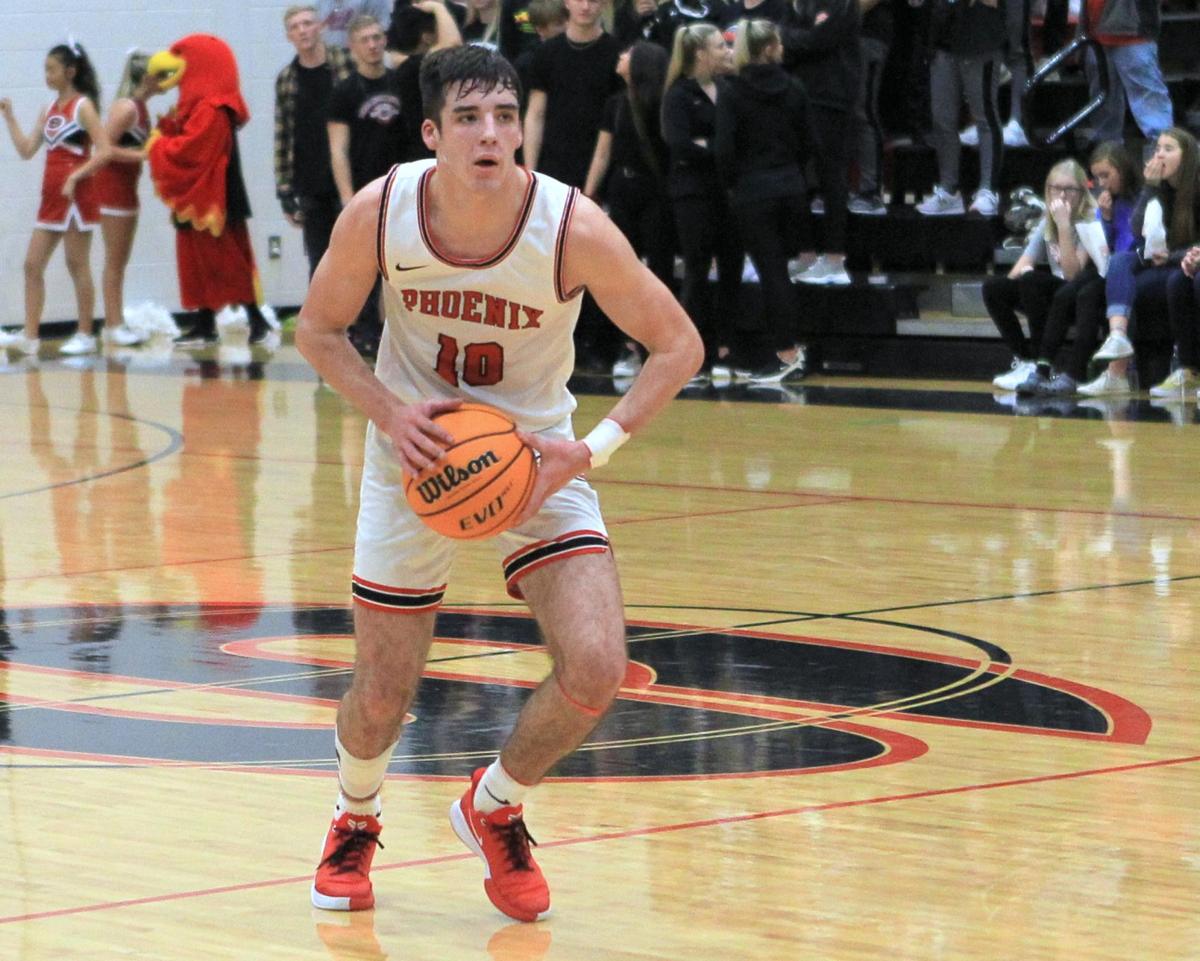 Sonoraville junior Murray Somers looks to pass during the Phoenix’s game against the Ringgold Tigers at Sonoraville High School on Friday, Jan. 10.

Sonoraville senior John Lister goes for the basket during the Phoenix’s game against the Ringgold Tigers at Sonoraville High School on Friday, Jan. 10.

Sonoraville senior Maliyah Parks battles inside the paint during the Lady Phoenix’s game against the Ringgold Lady Tigers at Sonoraville High School on Friday, Jan. 10.

Sonoraville junior Murray Somers looks to pass during the Phoenix’s game against the Ringgold Tigers at Sonoraville High School on Friday, Jan. 10.

Sonoraville had an opportunity to honor one of its seniors Friday night at The Furnace on a milestone accomplishment.

Maliyah Parks has now joined the 1,000 club in both points and, most recently, rebounds. Lady Phoenix head coach Stephanie Caudell presented Parks with a basketball honoring her 1,000th rebound before Sonoraville’s game with Ringgold.

“Anytime one of our players reaches a milestone, it’s exciting,” Caudell said. “She’s been the rock of our program for four years now. She scored her 1,000th point last year which is huge, but a thousand rebounds; that’s not something a lot of people do.”

Parks recorded her 1,000th rebound on Dec. 21 against North Paulding at the Rockmart Christmas Tournament. Caudell said Parks is the hardest worker she has ever coached.

“I’m not just saying that either. She takes it seriously. She works on her game. It’s important to her, and it shows,” Caudell said. “To be a 5-foot-10 post player and be able to rebound and be as tough as she has for as long as she has — never missed a game — that’s a credit to her taking care of herself and working extremely hard.”

The Sonoraville Lady Phoenix (11-6, 6-2 Region 6-AAA) could not complete a second-half comeback as they fell to the visiting Ringgold Lady Tigers 56-49. With the victory, the Lady Tigers have taken both regular-season meetings.

“I think it came down to one or two possessions here or there,” Caudell said. “It hurt us that little run they went on at the end of the first half, but my kids fought hard. I’m proud of them for that. (Ringgold’s) a good team and they just had our number tonight.”

Junior Alexa Geary led the way scoring-wise for the Lady Phoenix, generating 19 points. Geary started out 4-of-4, then trailed off during the second quarter before getting back on the scoreboard in the final 16 minutes.

“We asked her to kind of be our barometer and bring the energy and she did a great job of that tonight,” Caudell said. “If somebody gets hot, the other team is going to key on them a little bit more. The shots got a little bit tougher, but to her credit, she came back in the second half and hit some tough shots. She played her tail off and pretty much emptied the tank.”

The Lady Tigers’ win moved Ringgold into first place in Region 6-AAA as Sonoraville fell to second, the latter tied with North Murray at 6-2 in region competition (before Tuesday, Jan. 14 games).

After being off for a week, the Sonoraville Phoenix (9-6, 5-3 Region 6-AAA) boarded up Ringgold 49-42 behind 13 points from junior Orry Darnell.

“(We) had four days of practice this week leading up to this one,” Phoenix head coach Brent Mashburn said. “Our kids really worked hard. Our thing for the last week has been be one possession better and that’s what we try to do every day.”

Throughout the night, Sonoraville dominated the board, led by senior John Lister and junior Murray Somers.

“I just love the way they play,” Mashburn said. “I thought we dominated the glass on both ends. I don’t think (Ringgold) got themselves very many second shots and I think we created a couple of second, third, maybe even some fourth shots on our end. When we fly around and get our hands on balls and make plays, we make ourselves pretty hard to deal with.”

Somers recorded 11 points while Lister notched eight. Mashburn said his message to the team after the game was the next contest is the most crucial.

After a Tuesday night game at Adairsville, Sonoraville prepares for Round II of the 53 Frenzy Hoops Edition against cross-town rival Calhoun at Calhoun High School on Thursday, Jan. 16. The Lady Phoenix/Lady Jackets contest will tip off at 6 p.m., immediately followed by the boys game at 7:30 p.m.

'I'm better than that': Serena stunned at Australian Open

NFL player Antonio Brown turns himself in at Florida jail

Analysis: Too many players making mockery of All-Star voting