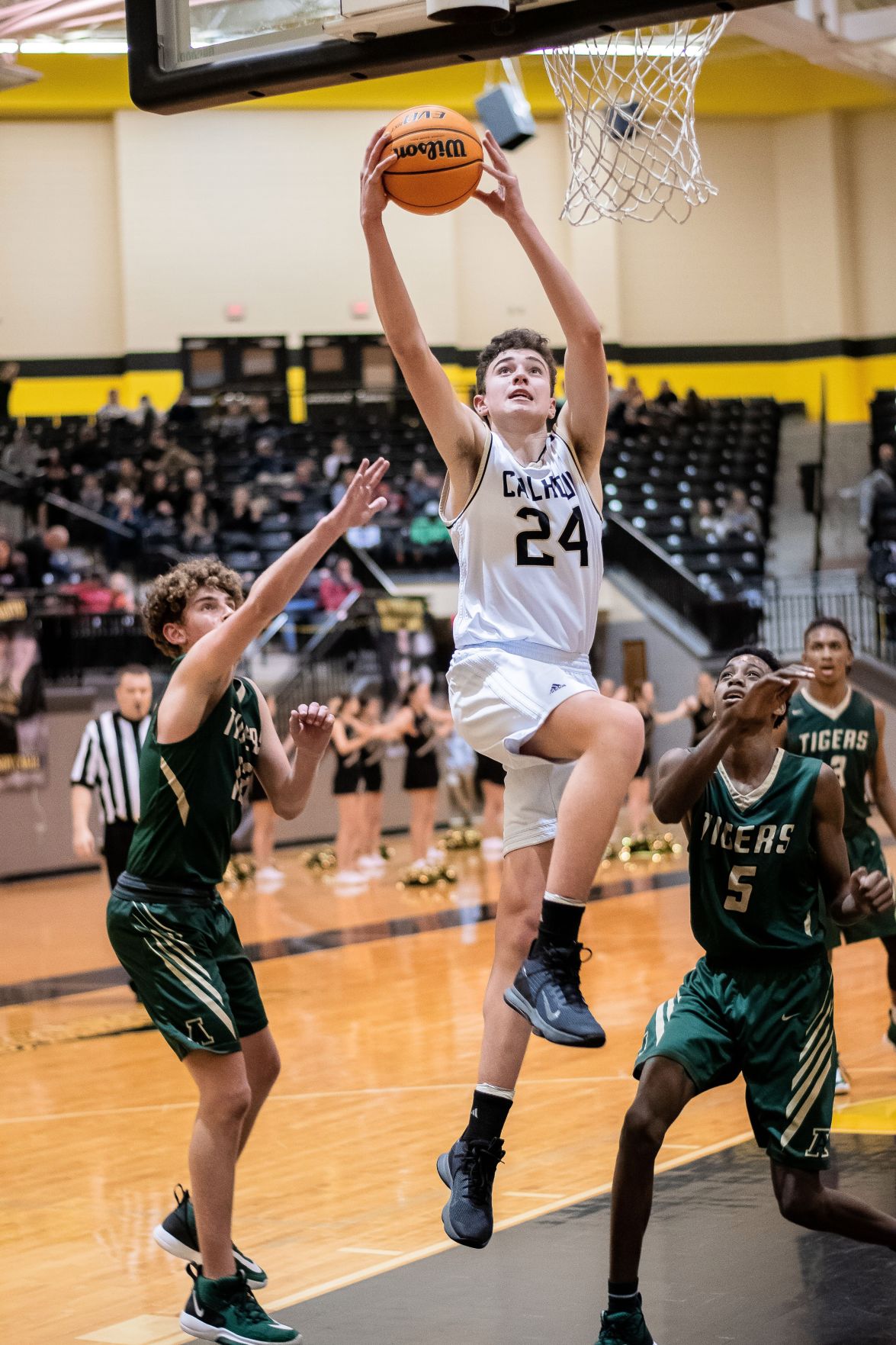 Calhoun freshman Dylan Faulkner goes for the layup during the Yellow Jackets’ Region 6-AAA consolation game against the Adairsville Tigers at Mountaineer Arena on Monday, Feb. 10. 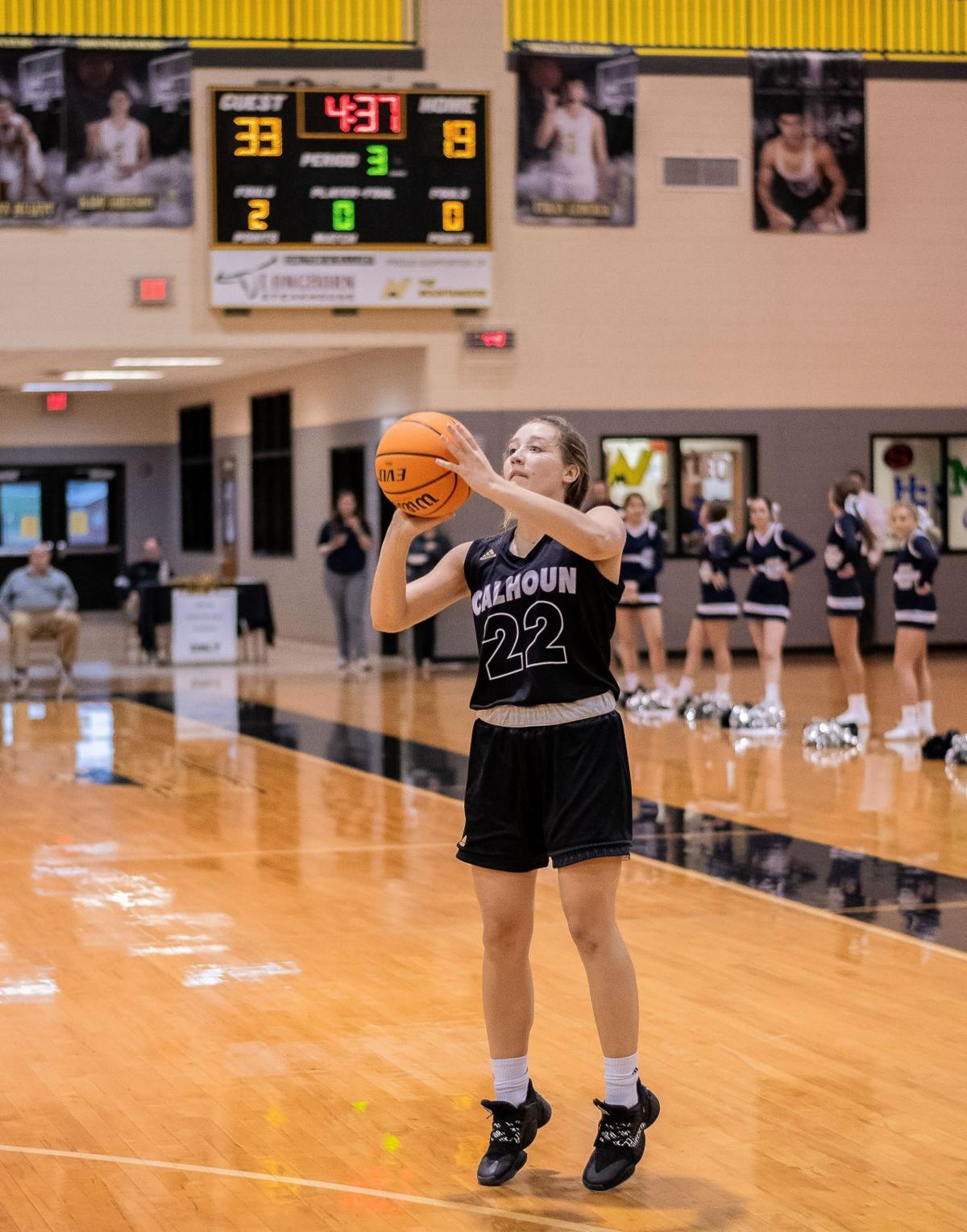 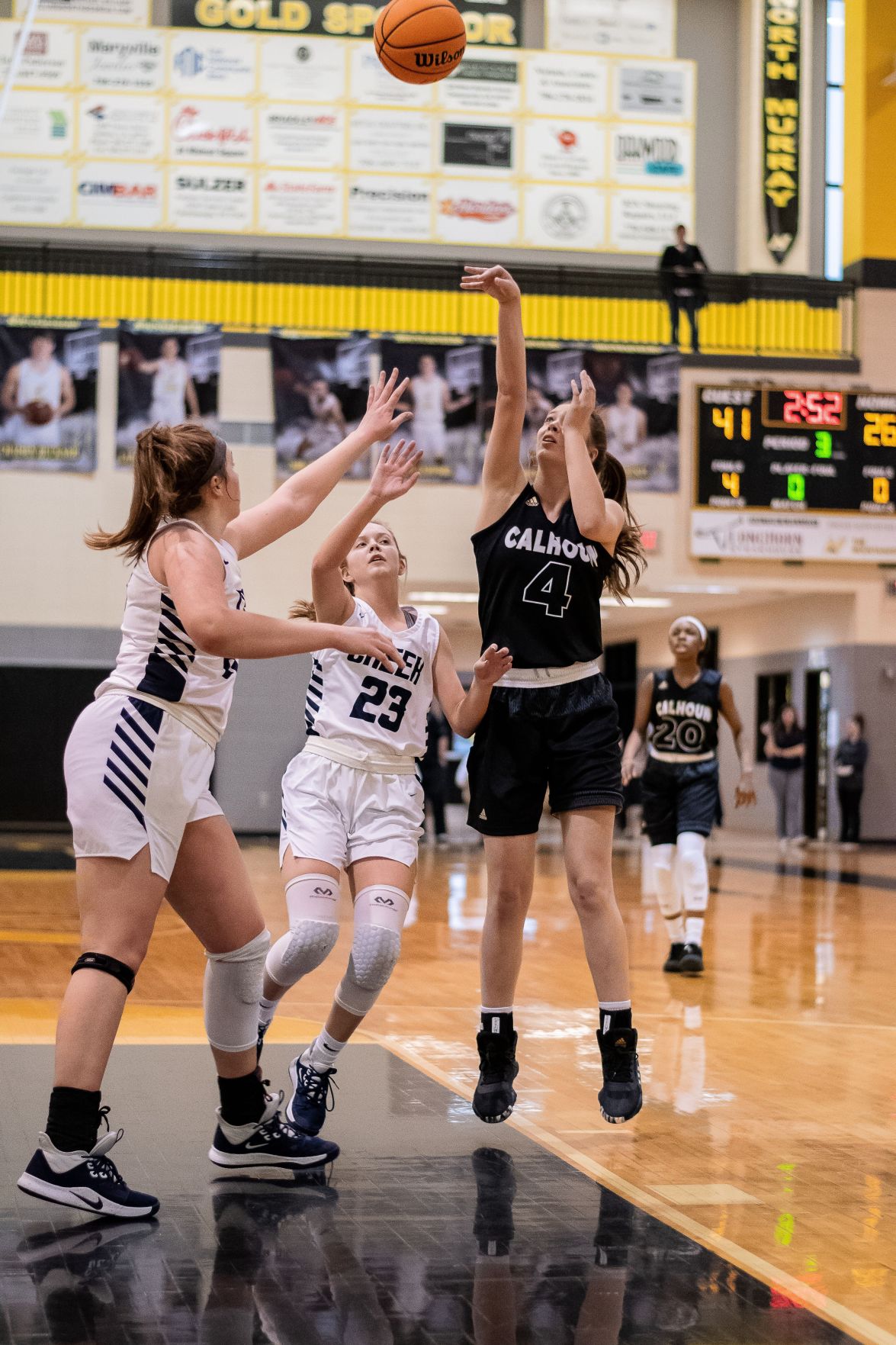 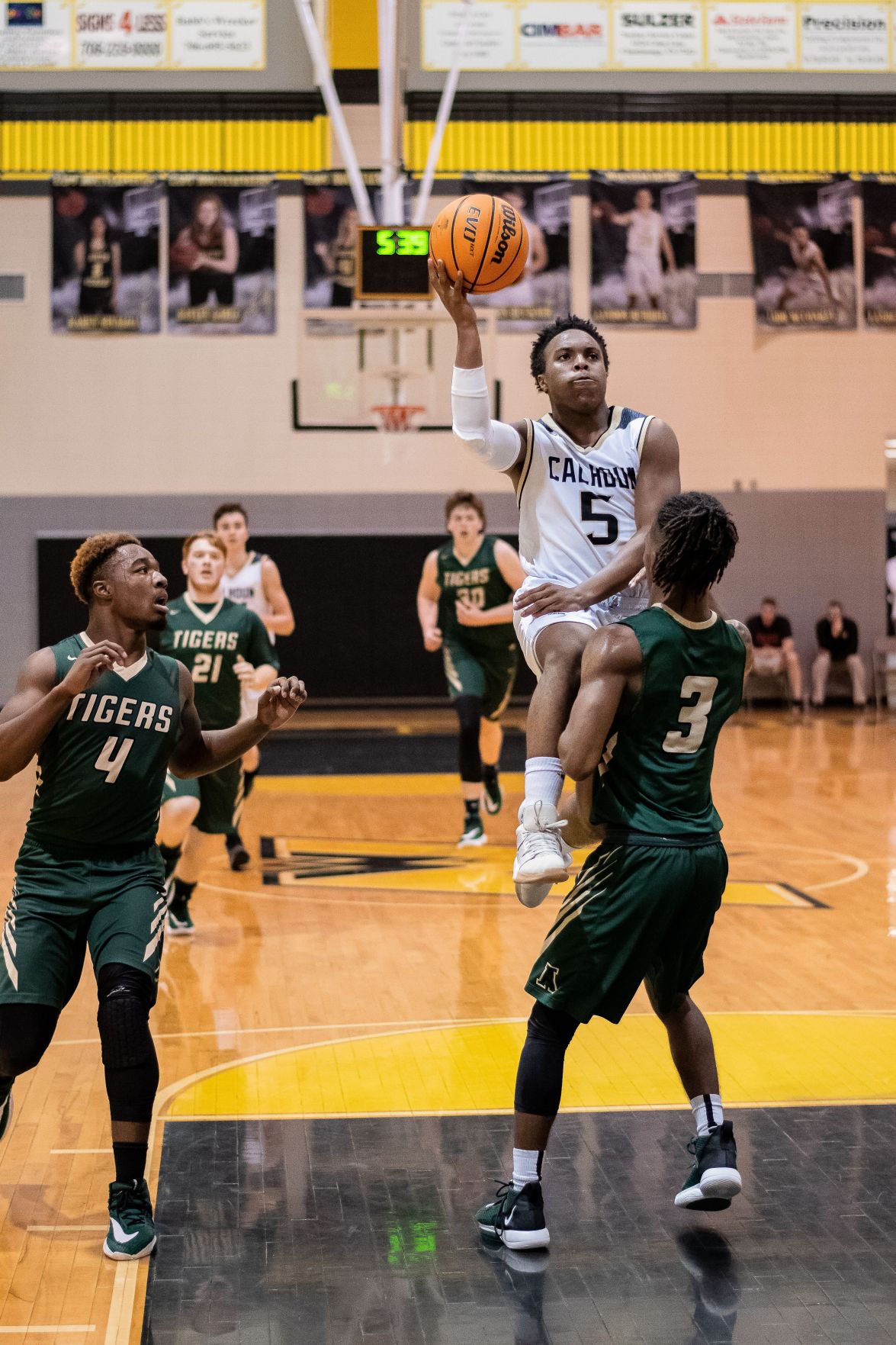 Calhoun sophomore Christopher Lewis goes for a two-point shot inside the paint during the Yellow Jackets' Region 6-AAA consolation game against the Adairsville Tigers at Mountaineer Arena on Monday, Feb. 10.

Calhoun freshman Dylan Faulkner goes for the layup during the Yellow Jackets’ Region 6-AAA consolation game against the Adairsville Tigers at Mountaineer Arena on Monday, Feb. 10.

Calhoun sophomore Christopher Lewis goes for a two-point shot inside the paint during the Yellow Jackets' Region 6-AAA consolation game against the Adairsville Tigers at Mountaineer Arena on Monday, Feb. 10.

The Lady Jackets earned third place in Region 6-AAA with a 15-point W. It was all Calhoun early as the team built up a 11-0 lead after the first eight minutes.

“I thought we were playing well early and they weren’t making any shots early,” Lady Jackets head coach Jaime Echols said. “I thought our shot selection and our movement on offense was very good and that we’ve got three days to get ready for Friday.”

Coahulla Creek, on the other hand, struggled to find a basket. In fact, the Lady Colts started the game 0-of-19 shooting from the floor before finding their first basket at 4:12 of the second quarter. At that point, Calhoun maintained a 14-2 advantage.

At the break, the Lady Jackets held a firm 26-8 edge, but Echols said he knew the Lady Colts would respond in the second half.

“I figured that would probably change and I told our kids at halftime you’re going to get the best that they have to offer,” Echols said. “Once we got the lead at halftime, not that we were just trying to hang on, but we didn’t want to do anything stupid to hand it to them.”

“They had not been our friend in some games,” Echols said. “You’ve got teams playing for something pretty big. Three and four, there’s a difference there and you’ve got teams that have played each other. This is the third time now.”

“We made as many free throws as (Coahulla Creek) shot,” Echols said. “Anytime you do that, you’re going to give yourself a chance to win.”

“Offensively, ... any kid can step up in any night and we don’t have a selfish player,” Echols said. “We run a little motion and they play within those concepts in trying to find the open player. You’ve got to take what they give you some nights.”

With the victory, the Jackets will head out on the road to begin their state-playoff journey. First stop: Morgan County on Friday, Feb. 14 at 6 p.m.

“Our mindset’s got to change now. It’s win or go home,” Echols said. “We’ve got to play fundamental defense, and if we do that, we’ll give ourselves a chance to win. I told the girls ... everything is great up to this point, but you’re remembered by what you do in February and you get to hang banners by what you do after Valentine’s Day. Hopefully, we’ll play well and keep giving ourselves a chance to keeping playing.”

After a slow start, the Calhoun Yellow Jackets outmaneuvered the Adairsville Tigers 59-49 to claim third in the Region 6-AAA consolation game. The victory will see the Jackets head out on the road and battle Region 8’s runner up, Franklin County.

“We didn’t get off to the start we wanted to, but we were able to come out and have a good third quarter,” Yellow Jackets head coach Vince Layson said. “I thought our defense held steady throughout the game. Overall, I’m always happy with a win.”

After falling behind 14-8 after one quarter of play, Calhoun tied the game at 20-20 entering halftime, carrying some momentum into the locker room.

“I think we just had to weather the storm shooting the ball poorly in the first half,” Layson said. “We were going to come out and press them in the second half, speed them up a little bit. I thought our depth would help us out and I think in the long run it did.”

The Yellow Jackets opened the third quarter red hot, shooting 5-of-6 on field goals. Calhoun grabbed hold of the lead and did not look back.

Freshman Dylan Faulkner yet again made a big impression on the court. Faulkner registered just five tally marks in the first half, but exploded for 14 third-quarter points — including two threes.

“I thought Dylan was the ‘X’ factor,” Layson said. “With his matchup with their big man, he’s a pretty good shooter on the perimeter so we thought that would be the mismatch. If Dylan can step out and he’s not going to come out with him. (Dylan) will be able to get some shots. Dylan was able to get to the free-throw line early in the game multiple times.”

Senior Gage Maffetone led the Jackets in scoring with 21.

“Gage did a good job,” Layson said. “He played the way he’s played for the majority of the year, scoring the basketball (and) helping us facilitate offense.”

The Yellow Jackets now prepare for the over 100-mile journey to Franklin County in just a matter of days for their first-round matchup in the state playoffs.

“We don’t want to be on the road, but I praised (the team),” Layson said. “I told them they are a good basketball team and that’s one of the beautiful things about basketball. Anything can happen in the playoffs. I just asked them to refocus for the next three-to-four days of practice, to be engaged and hopefully we can keep playing.”

Fate of rural area comes before Board of Commissioners, again

Pittsburgh Democrats back a candidate who blasted Obamacare and wrote ‘Go Trump!’ on Facebook