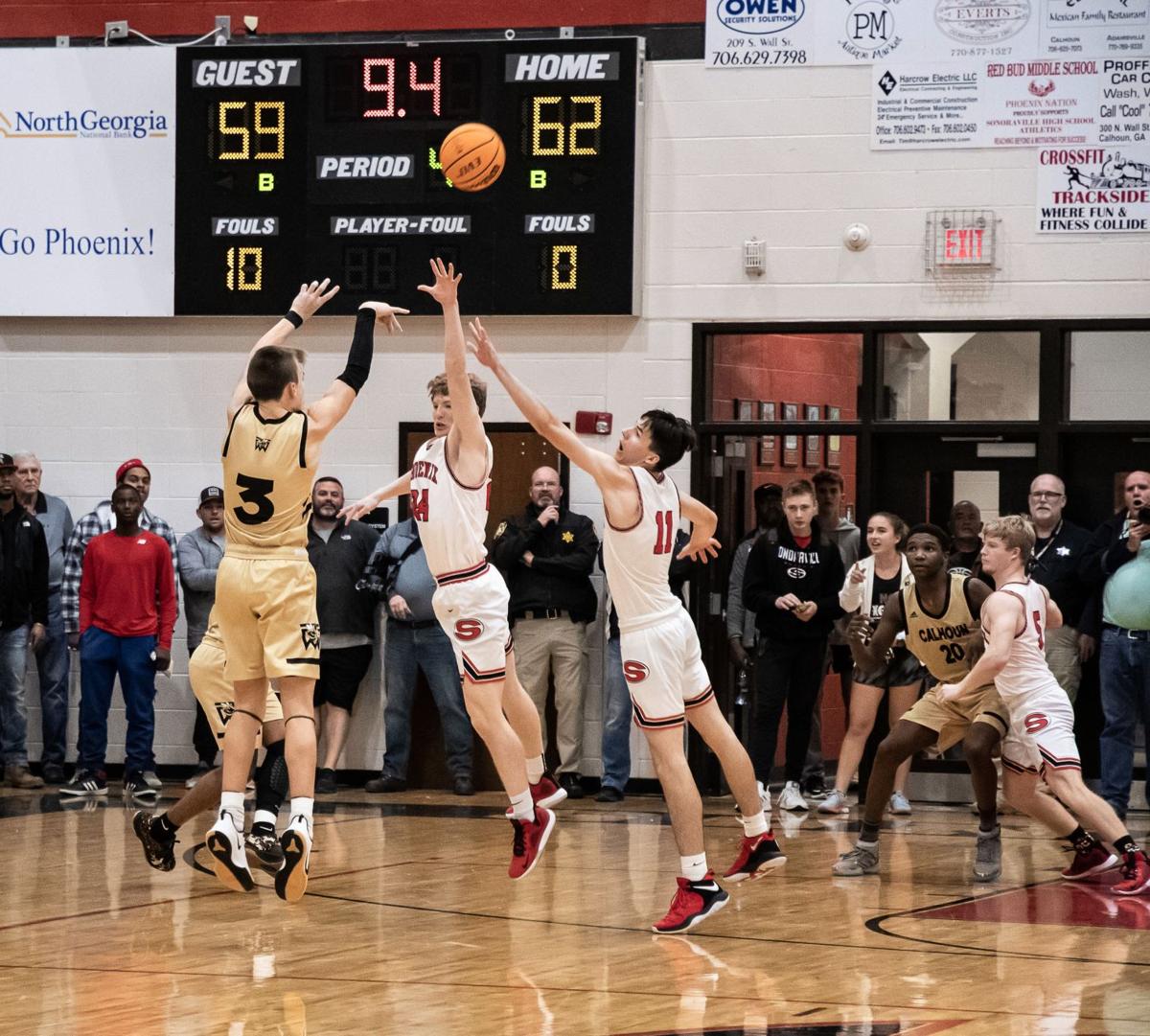 Calhoun sophomore Peyton Law drains a three-pointer to tie the game with 5.9 seconds left in the fourth quarter against the Sonoraville Phoenix at Sonoraville High School on Thursday, Dec. 5. Calhoun won 71-66 in OT. 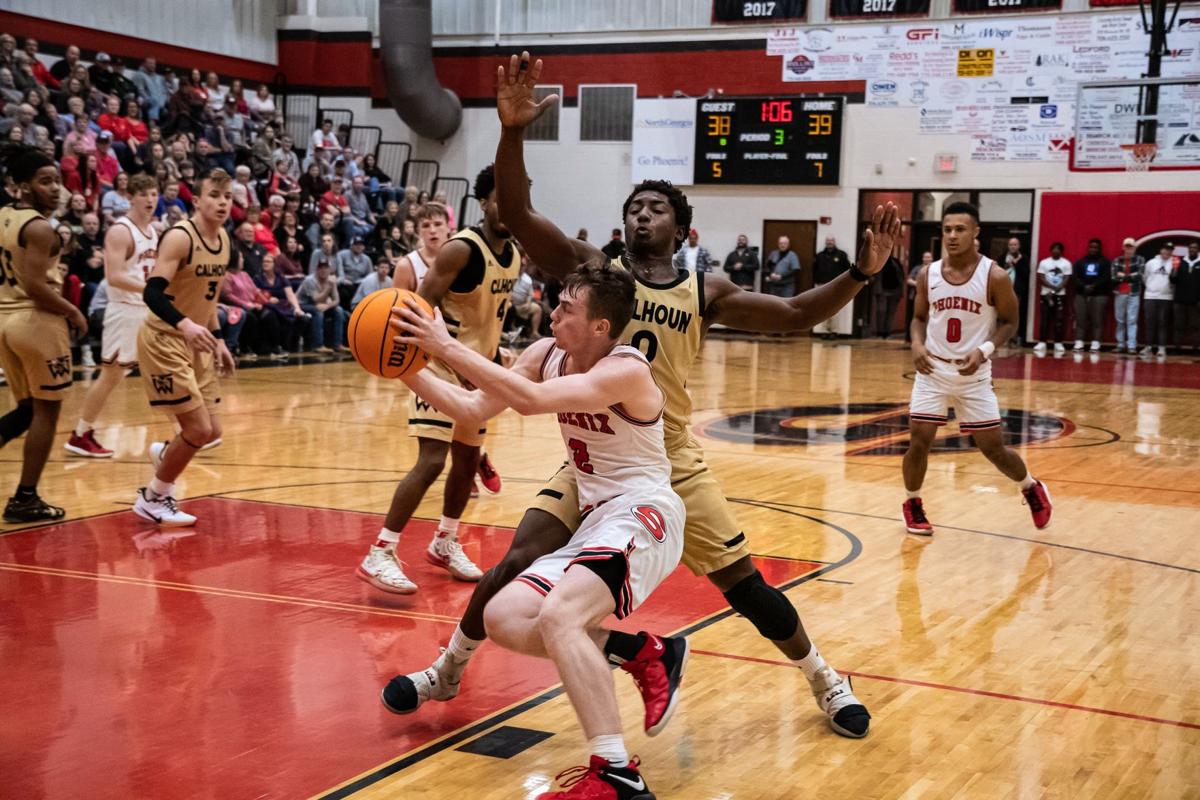 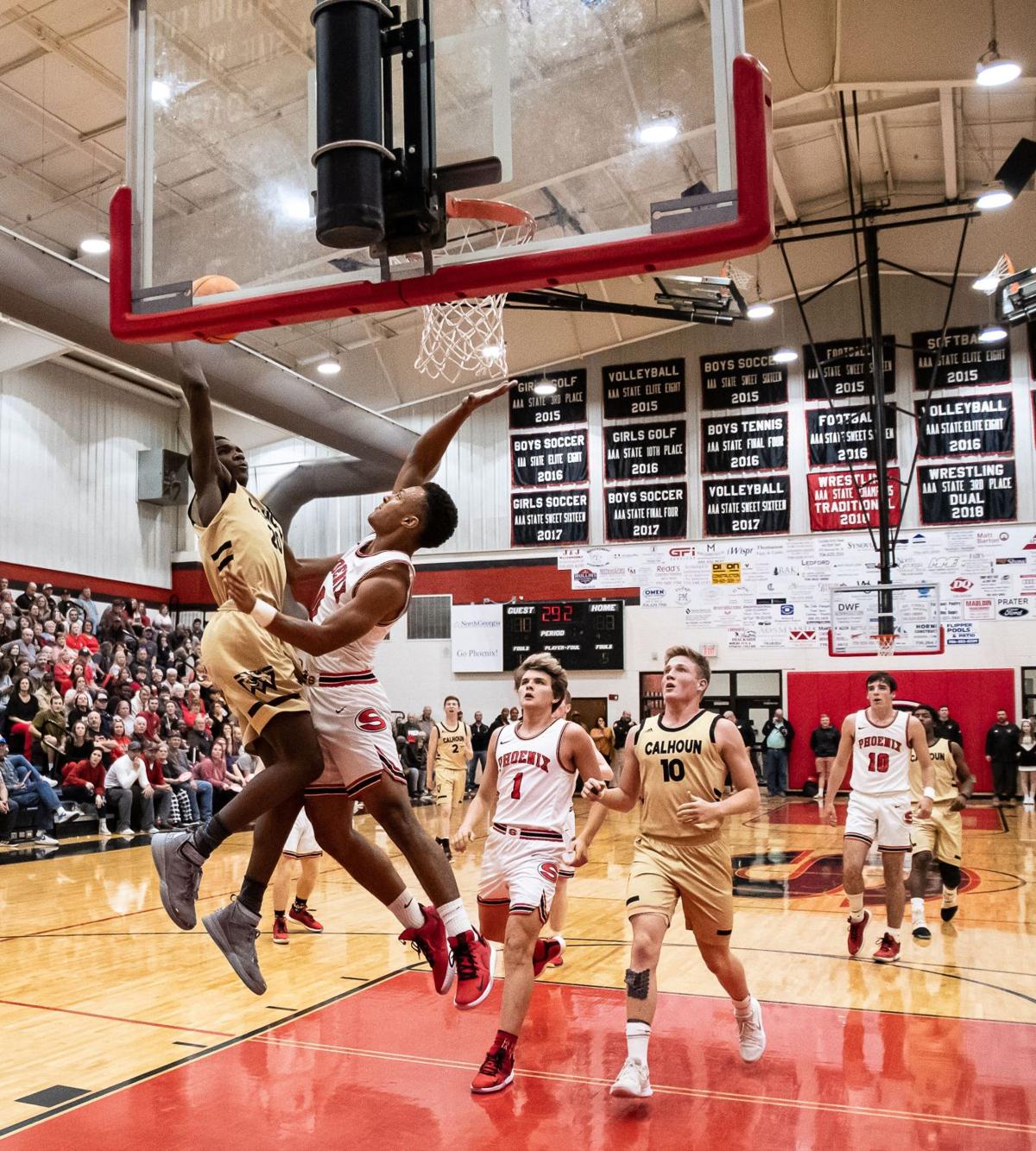 Calhoun sophomore Jaylan Harris goes for a dunk during the Yellow Jackets’ game against the Sonoraville Phoenix at Sonoraville High School on Thursday, Dec. 5.

Calhoun sophomore Peyton Law drains a three-pointer to tie the game with 5.9 seconds left in the fourth quarter against the Sonoraville Phoenix at Sonoraville High School on Thursday, Dec. 5. Calhoun won 71-66 in OT.

Calhoun sophomore Jaylan Harris goes for a dunk during the Yellow Jackets’ game against the Sonoraville Phoenix at Sonoraville High School on Thursday, Dec. 5.

When Calhoun and Sonoraville take to the court, you know a hard-fought battle is about to commence.

With an electric and rowdy crowd, the Calhoun Yellow Jackets (3-0) rallied back from 11 points down in the fourth quarter to prevail in overtime 71-66 over the Sonoraville Phoenix (2-3) Thursday at Sonoraville High School.

About halfway through the fourth quarter, all signs pointed toward a Phoenix victory in the 53 Frenzy Hoops Edition. Calhoun built an early 16-9 lead after one quarter, but that seemed like an afterthought to how the latter half of the contest was playing out.

“I felt like every time we got momentum, (Sonoraville) would answer,” Yellow Jackets head coach Vince Layson said.

“Basketball is a game of runs, no different than the run they went on to get up 16-9 after one quarter,” Phoenix head coach Brent Mashburn said. “Early on, we forced too many outside shots I thought and then kind of settled in and started attacking the basket a little bit better and that created some better shots from the outside and got us some easy ones.”

Calhoun got the ball back with a chance to tie the game, and the stage was set for sophomore Peyton Law.

“Just shortly before, I looked at him on the bench and I put him in and said ‘Hey, we need offense,’ and he said ‘I got you, coach,’” Layson said.

Law, with ice (possibly) in his veins, nailed a 3-pointer with 5.9 seconds left to play in the fourth. The Calhoun sideline erupted. Ironically enough, it was Law’s first field goal of the night.

“They were looking for me to get the ball,” Calhoun senior Gage Maffetone said. “We were going to run a little ... pitch back to me. (Sonoraville) doubled teamed that, so had to look for my teammates and luckily we had Peyton Law step up, hit a deep three.”

Moments later, on the inbound pass, Calhoun got a steal and Maffetone nearly hit the buzzer beater. The game was tied 62-62 at the end of regulation.

“We were just saying we could not foul, it was double bonus,” Maffetone said. “We had to limit them to one shot, one shot only. Once they miss one, we’ve got to get it and go and get something rolling on offense.”

Overtime featured the two teams trade baskets, not wanting to be the one to make a critical mistake. However, Sonoraville got into foul trouble. Calhoun senior Tonocito Martha and Maffetone hit two and three free throws, respectively, to seal the result.

“Well, honestly (I) missed the game-winner, so I had to come in clutch somehow,” Maffetone said. “I wasn’t going to let my team down twice in a row.”

Maffetone said the team had been up since 5:30 a.m. and got in some practice that morning in the gymnasium back at Calhoun High School.

“We’ve just been working hard and hopefully this is a good start to us,” Maffetone said. “We were a little rusty playing as a full team because our football players, they get here late because of football, but it all ended up working out in the end.”

Both sidelines were passionate throughout, rivaling one another for vocal supremacy with chants of “Phoenix Nation” and “Jacket Nation” echoing throughout the compact venue.

“I told them beforehand, that’s why you .. coach, that’s why you play for nights like tonight when you get your cross-town rival in a packed house,” Mashburn said. “You get a pretty entertaining game ... to watch, at least a competitive one for sure. That part of it is what makes it enjoyable and makes it fun.”

“The players all know each other,” Layson said. “They’re friends outside of the basketball court lines and I think they take that personal. They want to go in there and they want to be the king of the county. It means something to win this rivalry.”

“This is the best place to play,” Maffetone said. “Honestly, it just comes with experience. If you ain’t game ready and not scared to hear a little trash talk from the crowd, then this ain’t the game for you. You’ve got to deal with a bunch of adversity and a bunch of trash talk to get through this.”

The Yellow Jackets remain undefeated at 3-0 (at the time of this writing), while the Phoenix fall to 2-3. Both teams have a quick turnaround as Calhoun’s home opener is Friday versus Murray County while Sonoraville travels to Ringgold.