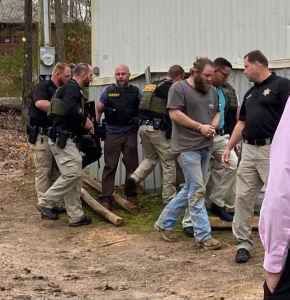 Police escort Philip Manning Neal II after he surrendered while hiding under a home. 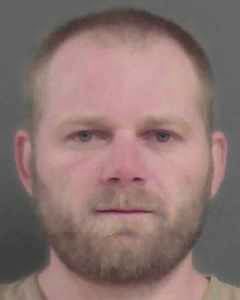 A Calhoun man already wanted on warrants was arrested on multiple charges after deputies say he held a woman against her will and then forced an armed standoff when they surrounded his home.

According to a press release from the Gordon County Sheriff’s Office and jail records, Philip Manning Neal II, 36, of 144 Laurel Place, was arrested Monday and charged with a probation violation, battery — family violence, two counts of aggravated assault, false imprisonment, possession of a firearm by a felon and possession of a firearm during the commission of a felony.

The case began when Kayla Silvers was reported missing Monday morning. A family member said she had last been seen on Friday afternoon.

Deputies soon learned that Neal was likely responsible and, after learning he was already wanted for a probation violation (original charge: possession of methamphetamine with intent to distribute), surrounded his home on Dews Pond.

Deputies located Neal hiding under the home and he told them Silvers was with him and that he had a gun. Eventually Silvers was released, and after about 30 to 45 minutes of “tense negotiations,” Neal surrendered.

Lessons learned from 2016, but US faces new election threats

Georgia inmate who came close to execution in 2017 dies

Virus death toll in China rises as US prepares evacuation