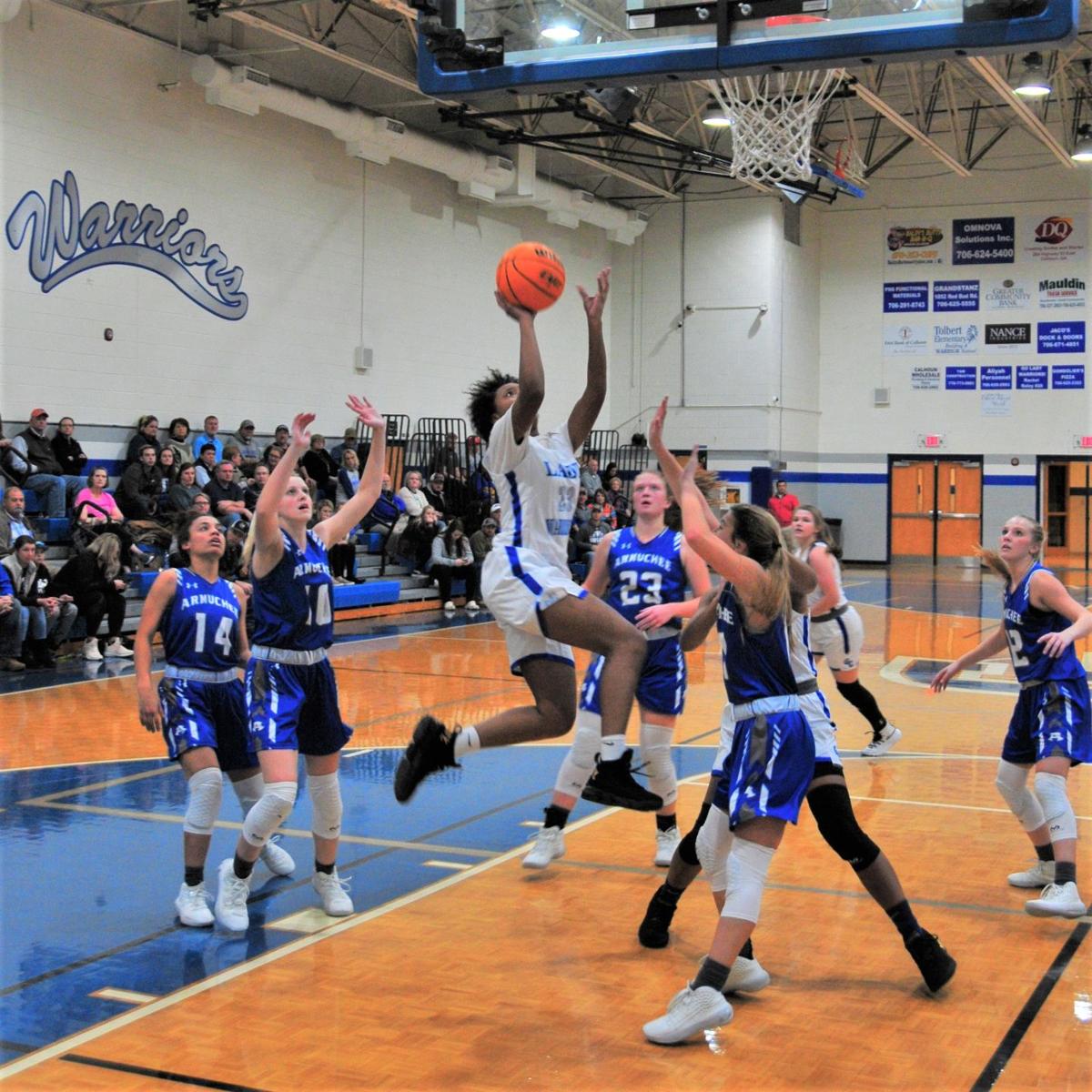 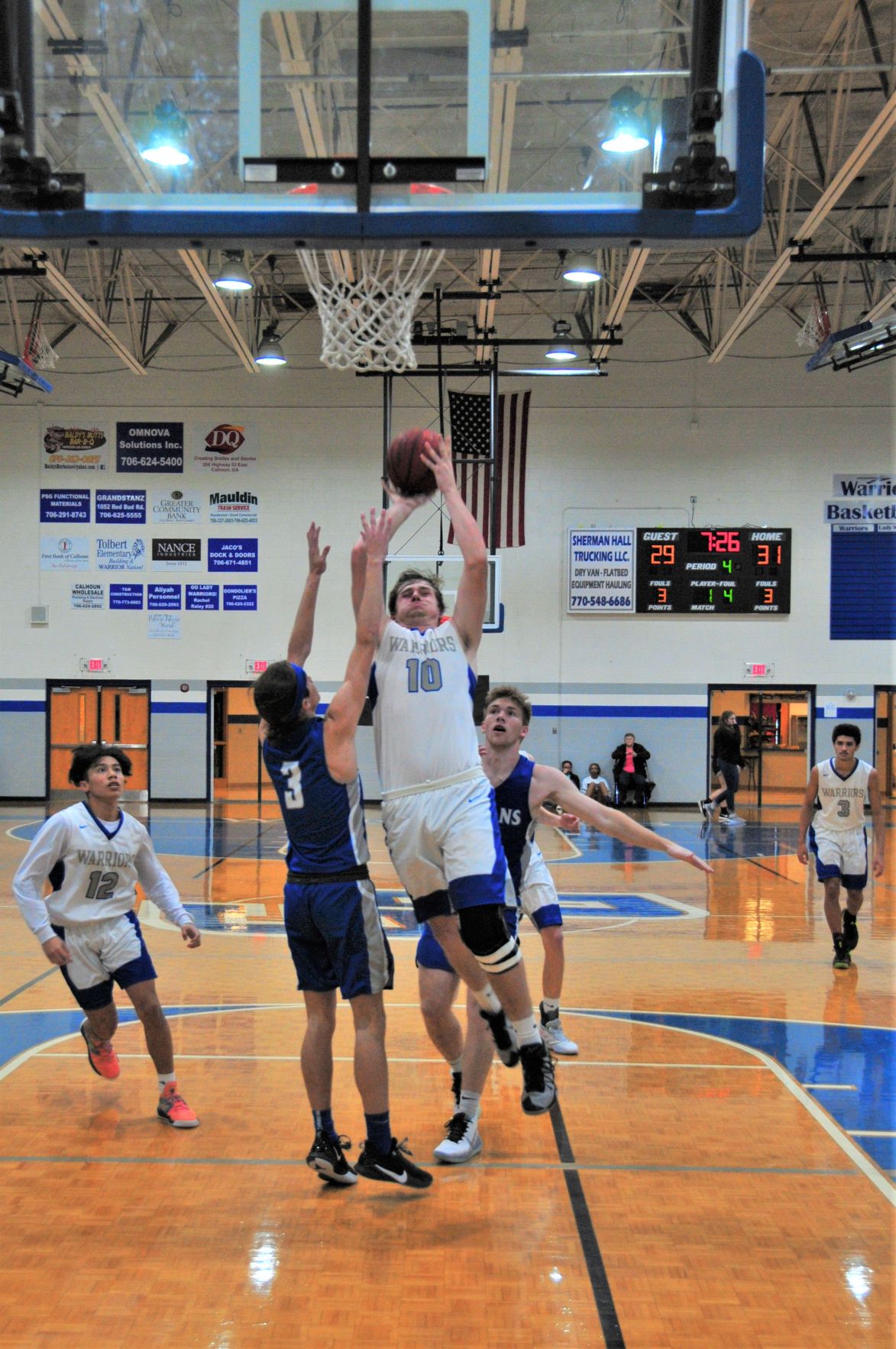 Gordon Central’s Clayton Hogue battles in the paint during the Warriors’ game against the Armuchee Indians at Gordon Central High School on Friday, Dec. 13.

Gordon Central’s Clayton Hogue battles in the paint during the Warriors’ game against the Armuchee Indians at Gordon Central High School on Friday, Dec. 13.

In non-region competition, the Gordon Central Warriors split with the Unity Christian Lions Monday at Unity Christian School. The Lady Warriors improved to 9-2 on the season with a lopsided 69-29 win over the Lady Lions while the GC boys fell in a tightly-contested contest 72-63.

The Gordon Central Lady Warriors are on a four-game win streak after a dominant performance against the Lady Lions. Emily Reece led the Lady Warriors in scoring with 16 points, followed closely by Mercedes Coleman’s 15.

“We try to treat non-region games like a competitive practice,” Lady Warriors head coach Matt Swanson said. “It’s just a day for us to get better and we change our rotations a lot more in non-region play.”

Swanson ensured everyone on the team recorded valuable varsity minutes on the floor.

“I think non-region games like this make our program better,” Swanson said. “I’ve seen I can trust everyone on our team. We can play at spurts without Mercedes (Coleman) which is a plus for us.”

Everyone but junior Jada Jaco ended with at least two points; however, Swanson had high praise for Jaco after the game.

“Jada probably played better than anybody,” Swanson said. “She set the tone defensively, played harder than anybody on the floor. I feel like our biggest area of improvement is our overall team.”

Unity Christian (7-1) would get the last roar of the night as they closed out the Gordon Central Warriors (1-9) with a nine-point victory. GC sliced the deficit to just one point (64-63) with 27.7 seconds to play in the fourth, but a three-point play and a few turnovers ultimately sealed the Warriors’ fate.

“We just fell short here at the end,” Warriors head coach Derrick Broom said. “It comes down to experience. Not being in those situations and us needing to find a true leader out there. Somebody to step up and take charge.”

In the loss, senior Clayton Hogue recorded a double-double (23 points, 13 rebounds) to pace the team. Junior Kade Steward followed closely behind with 22.

“When we finally fed him the ball, he was able to do something,” Broom said on Hogue. “Our biggest thing is we have trouble getting it to him. We want to jack up shots instead of getting our post players involved early, and once we did, outside shots starting opening (up).”

The Warriors started out the contest eight the 8-ball, trailing Unity Christian by double digits in the second quarter. The Lions had a 20-9 lead after eight minutes.

“We’ve got to learn to come out with energy from the tip,” Broom said. “We can’t wait until we’re down 10-12 points before we decide, hey, we need to play. Doesn’t matter who we’re playing, we’ve got to come out with energy and intensity from the get-go and we haven’t done that yet. We’re always having to battle back. We’ll continue to work on that and hopefully we’ll get better.”

The Warriors cut Unity’s edge to five at halftime and took their first lead of the game at 36-34 with 1:52 remaining in the third quarter. From there, the teams battled back-and-forth with many trips to the free-throw line.

At 64-63, GC had a bad pass and an out-of-bounds called against them, which would lead to Unity Christian points.

“I need five leaders there at the end of the game when it’s close,” Broom said. “Those are learning moments. Luckily, it’s not a region game. We can learn and move on.”

“We’re going to use that time to of course get better on the floor, but (also) to build our bonds off the floor too,” Swanson said.